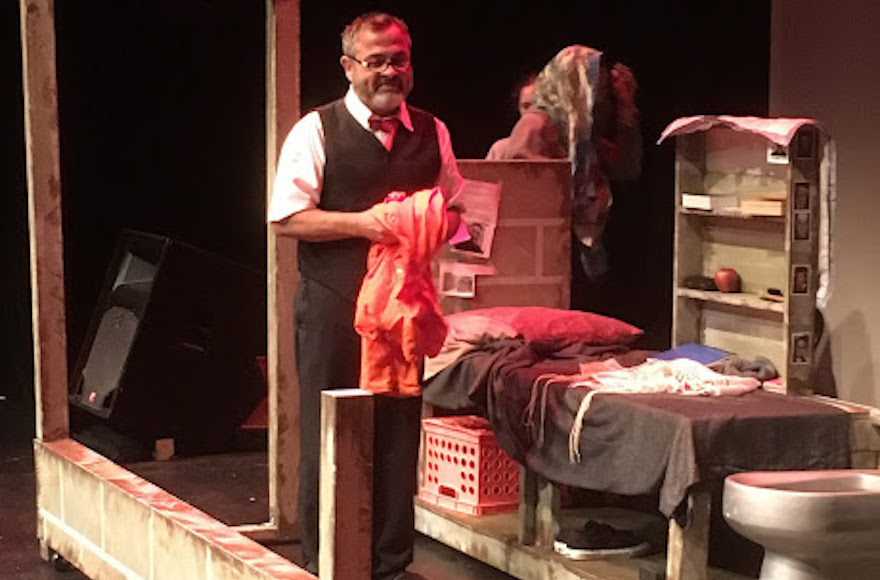 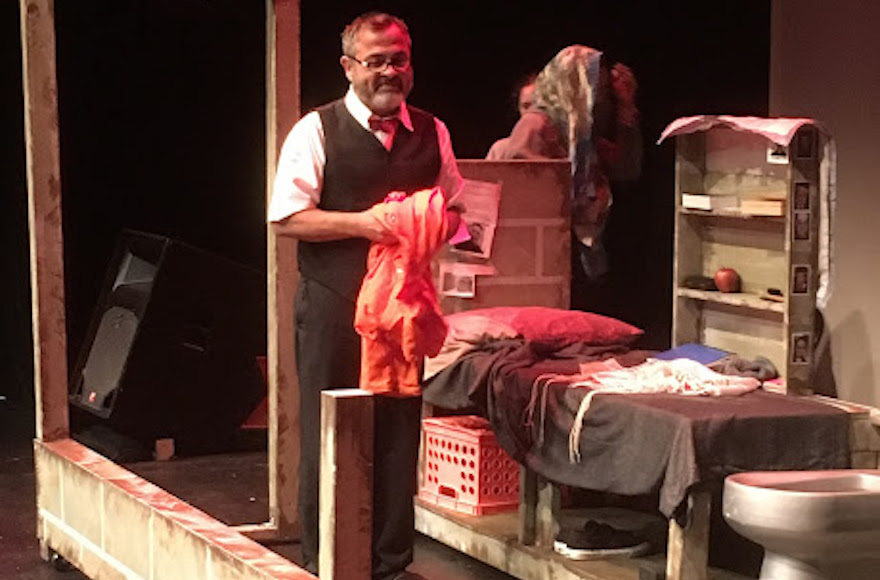 WASHINGTON (JTA) — Rabbi Barry Freundel was the rabbi of Kesher Israel in the Georgetown section of Washington, D.C. He was a man of power in his synagogue, and influence in the wider modern Orthodox world. But all of that went away when he was convicted in 2015 on voyeurism charges after spying on and filming women while they undressed and showered at the mikvah, or ritual bath, housed in his synagogue.

After pleading guilty to 52 counts of voyeurism, Freundel was sentenced to 6 1/2 years in prison.

Now Freundel’s story is the subject of a one-act play written by A.J. Campbell. “Constructive Fictions” is a part of the 2017 Capital Fringe Festival, which has its final performances on Thursday and Sunday. It has already been performed three times during the festival.

Campbell, 48, grew up Orthodox in Los Angeles. After coming out as a lesbian, she became secular. However, five years ago, after surviving ovarian cancer, she connected with the Conservative movement.

The play puts Freundel in a solitary jail cell, where he imagines dialogues with four of his victims, who appear onstage as apparitions.

It has drawn complaints from some of Freundel’s victims, who said Campbell did not talk to them to gain their perspectives. In response, the playwright said she hopes to meet with some of the victims and plans to write a longer version of “Constructive Fictions” that incorporates their stories.

JTA spoke to Campbell about her experience unearthing the story and writing about the sensitive topic.

JTA: What was your first encounter with the story about Rabbi Freundel?

Campbell: Like most people in D.C., I was glued to the coverage. The story came out in small little bits; every day it seemed to be getting worse. The more we found out, it was just horrifying.

How did you relate the effects of the coverage to the religious climate at the time of the incident?

Having grown up in that world [Orthodox Judaism], I knew that no matter what the women had said or done, it would have been hard to challenge a rabbi. He had so much power over them. They couldn’t become Jews until he said so. There was no absolute path, whereas at my temple … it’s very prescribed and up front. At his temple, it’s up to the rabbi. And they want to be hard on you to make sure that you are sincere.

What was compelling to you about the story?

A couple of things. One, the idea of a man who totally destroys his own life. He was at the peak of his game and near retirement. He would have gone out on a high note, probably retired in Israel. He could have written and done whatever. None of this had to happen, but he tripped himself up on purpose. There are so many other men who’ve done that — think of Anthony Weiner, David Vitter. All of these men who just blow up their lives. That was very compelling to me. I thought that would make an interesting drama.

I thought of him sitting in a jail cell. What must he be thinking? At the time he was in solitary confinement for most of the day. I thought of him missing time on the bimah, where everyone got to hang onto [his] every word. If you have nobody to talk to, words become your currency. I thought, you know, he might also be thinking about the women. He was obsessive, the images, the cataloguing, watching them, the videos. It was beyond extreme.

Could you talk about your research, what you read or who you wanted to talk to so you could further understand what went on.

I wanted to talk to him. Because in this whole thing his voice, funny enough, was the one thing we didn’t get. His lawyers wouldn’t let him talk because he had an appeal pending.

Do you want, in a way, for the audience to empathize with the rabbi?

I don’t want them to empathize with him. I want them to understand the pressures he was under. I can’t say it was the exact thing that made him break, but we know that he was fine for 60 years of his life and then something happened. Whatever his problems were before, it wasn’t this. It wasn’t this secret world that he created. Part of the reason why I think this is important is because … there’s another Freundel out there and we have to recognize him when he shows up again. That charming, conniving, sort of sociopath who will get what he wants.

When you were writing the script, were you ever worried that you were intentionally or unintentionally inviting the audience into the suffering of the victims?

I wanted the audience to join in on the constructive fiction that he was spinning. The victims’ pain was a part of it. I thought about what if he did get to apologize to the women. In the play they are all apparitions in his mind, but there’s something interesting about all of that.

As you know, some of the victims have come out and said the play is triggering, it’s emotional. Your response was that it’s a story for the public now. What exactly do you want the Jewish community to know about this story from the play?

So one of the things that I think was different at Kesher was the presence of women. Women on the board, women running the mikvah, and the woman who came forward to speak their mind. All these women put him in jail. The presence of women makes all the difference. If we want to avoid these scandals, that’s what we have to do. … By elevating women into crucial roles, I think it could make all the difference.