Anti-Semitism, Hungary and Netanyahu: What you need to know 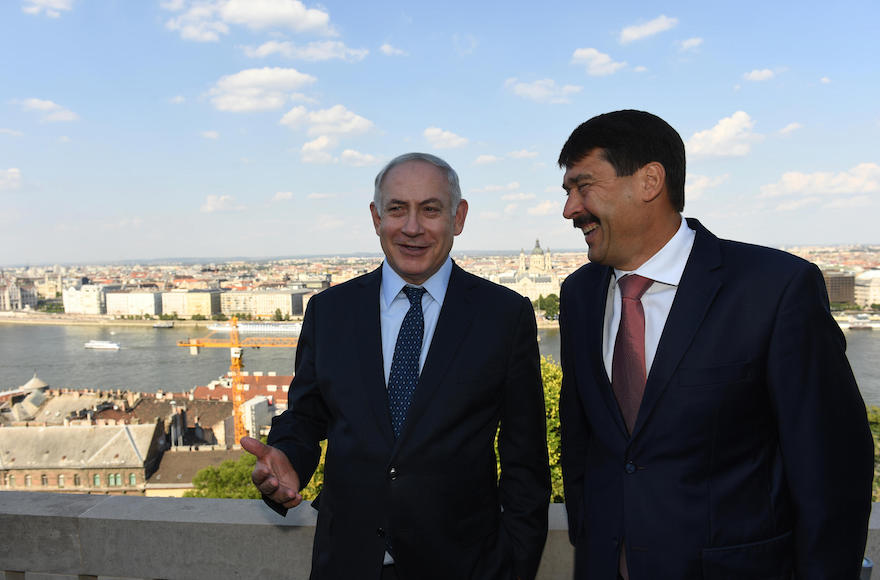 (JTA) — To critics of Benjamin Netanyahu, the Israeli prime minister’s visit to Hungary this week was a disgrace and an abandonment of local Jews in their fight against a government that is widely seen as one of Europe’s worst promoters of anti-Semitism and Holocaust revisionism.

Yet other Hungarian Jewish leaders and observers of Israel-Hungary relations viewed the visit as both vital to his country’s own interests and effective in assisting Hungarian Jews to promote theirs.

Such were the dynamics when Netanyahu held a joint news conference Tuesday with his Hungarian counterpart, Viktor Orban, during which Netanyahu devoted exactly 35 words to what he called “the concerns” of the Jewish community in Hungary. He did not specify those concerns in the statement, which kicked off the three-day visit in Hungary — the first by an Israeli prime minister since the fall of communism.

“I discussed with Prime Minister Orbán the concerns that I heard raised from the Jewish community,” Netanyahu said. “He reassured me in unequivocal terms, just as he did now, publicly. I appreciate that. These are important words.”

It was a vague and mild reference to a growing list of grievances fueling an escalating row between a significant part of Hungarian Jewry and their government. This includes alleged anti-Semitic incitement by the government in the form of attacks on the Hungarian-born Jewish philanthropist George Soros; the glorification of Nazi collaborators; crackdowns on Jewish opposition groups, and state-sponsored xenophobia against other minorities.

Zehava Gal-On, the leader of Israel’s left-wing Meretz party, wrote on Facebook ahead of Netanyahu’s visit that in view of the track record of Orban’s government, Netanyahu “has become a collaborator of anti-Semites.” Andras Heisler, president of the Mazsihisz Jewish federation of Hungary, said ahead of the visit that his community felt “left in the lurch” by Israel because of its perceived indifference to some of the issues at play.

Also prior to the visit, Heisler told JTA that he hoped Netanyahu “condemns strongly any kind of hate campaign or hate speech.”

Netanyahu’s photo op with Orban on Tuesday was not the rebuke that Mazsihisz had been seeking, the chairman of its rabbinical council, Rabbi Zoltan Radnoti, told JTA the following day.

But to Rabbi Slomo Koves, leader of the Chabad-affiliated Unified Hungarian Jewish Congregation, or EMIH, the Netanyahu visit was instrumental in obtaining Orban’s first unequivocal rejection of Hungary’s fascist past, when Orban said the country had committed a “sin” in not protecting its Jewish citizens during World War II.

And the visit was crucial, Koves added, for strengthening Jerusalem’s alliance with one of Israel’s staunchest supporters in the European Union and the only member state with a large Jewish population that is not under threat from anti-Semitic violence.

Peter Feldmajer, its previous president and now a representative in the umbrella group for the Central District, said government-led campaigns to rehabilitate collaborators with the Nazis or demonize liberal Jews like Soros are “ugly” and they “hurt the Jewish community of Hungary.” He also agreed that the anti-Soros campaign had anti-Semitic characteristics.

“But the community is threatened not by these issues,” Feldmajer said, “but by Islamic violence and bans on ritual slaughter, both of which Orban opposes. Therefore, there is nothing wrong with Netanyahu being received here.”

Koves called Orban’s remarks, delivered at a joint news conference with Netanyahu, the “most outspoken rejection of Hungary’s fascist past and admission of guilt” ever.

The government of Hungary, Orban said, “committed a sin when it did not protect the Jewish citizens of Hungary.” Hungarians, he added, decided “instead of protecting the Jewish community to collaborate with the Nazis.”

Radnoti welcomed Orban’s speech but said it omitted a direct reference to the active murder of tens of thousands of Jews by Hungarian troops.

“Orban spoke of collaboration. But Hungarians did more than help the Germans kill Jews: They killed them themselves, and in thousands,” the rabbi  said.

Still, coming from a leader whose party openly glorifies late politicians with an anti-Semitic legacy, the Orban speech was precedent setting, according to Efraim Zuroff, a hunter of Nazis and head of the Eastern Europe operations of the Simon Wiesenthal Center.

“It was very important,” Zuroff said of the prime minister’s words about the Holocaust. “I never heard this from Hungary.”

Indeed, two years ago, Orban was accused of whitewashing Hungary’s Holocaust-era record when he ignored Jewish protests about a monument built in Budapest about the Nazi occupation that featured an innocent angel being attacked by a vicious eagle. Only last month, Orban in a speech called the Nazi collaborator Miklos Horthy, Hungary’s World War II leader, an “exceptional statesman.”

Orban’s statement made it counterproductive for Netanyahu to revisit the issue, Koves argued.

“I’m no diplomat, but I think it’s common sense that such a statement is more powerful coming from Mr. Orban than from Mr. Netanyahu,” Koves said while crediting Israeli diplomacy, at least in part, for obtaining the statement.

The statement was a step further than any gesture Orban had made previously regarding Hungarian complicity in the Holocaust. He also said the Hungarian government today has a “zero tolerance” attitude to anti-Semitism.

But the “problem is,” Zuroff said, “it doesn’t represent the reality on the ground.”

He was referring to a host of government initiatives celebrating fascists and obstructing efforts to bringing Nazi-era criminals to justice, as well as the recently terminated billboard campaign against Soros, a left-leaning American billionaire who funds opposition groups and organizations assisting Muslim immigrants both in Hungary and Israel.

Mazsihisz claimed the billboards, which featured pictures of a laughing Soros and a slogan saying “don’t let him have the last laugh,” encouraged anti-Semitism. Indeed, some of the posters were defaced with anti-Semitic slogans.

“Soros’ name has a different meaning in Hungary [than] in Israel,” Heisler, the Mazsihisz president, told JTA earlier this week. “In Hungary, Soros is the symbol of the Jewish capitalist. The campaign against Soros in Hungary incited anti-Semitic reactions.”

The Chabad-affiliated EMIH, however, disputes the assertion, viewing the campaign as criticism only of Soros’ politics and actions. Organizations belonging to both EMIH and Mazsihisz receive hundreds of thousands of dollars in government funding.

Israel’s ambassador to Hungary, Yossi Amrani, made a statement earlier this month that seconded the Mazsihisz view. But the following day, a spokesman for the Israeli foreign minister added a “clarification” to the Amrani statement saying that its “sole purpose” was to reflect that Israel rejects “any expression of anti-Semitism in any country and stands with Jewish communities everywhere in confronting this hatred.”

The clarification added that in no way was the statement “meant to delegitimize criticism of George Soros, who continuously undermines Israel’s democratically elected governments by funding organizations that defame the Jewish state and seek to deny it the right to defend itself.”

Regardless of the Israeli government’s open animosity toward Soros, Israel has good reasons to preserve its friendship with Hungary.

Netanyahu alluded to this in his statement, and later in a hot-mic incident in Budapest, where his private summit talk with Orban and three other leaders of EU member states in Central Europe was accidentally aired to journalists.

In his public address, Netanyahu thanked Orban for “standing up for Israel in international forums. You’ve done that time and again” – an apparent reference to Hungary’s public refusal to comply with European Union regulations requiring separate labeling for products from West Bank settlements and several similar cases.

Later, meeting with Orban and leaders of the Czech Republic, Poland and Slovakia, Netanyahu was heard calling the European Union “crazy” for insisting that closer trade ties with Israel will only come after the resolution of the Israeli-Palestinian conflict. He asked the leaders to help change that policy.

Insisting Israel downgrade its relations with Hungary over perceived anti-Semitism is “unrealistic,” according to Koves, who said doing so ignores Israel’s need for allies like Hungary. But it is also unjustified, he added, in light of the relatively positive situation of Hungarian Jewry.

According to TEV, a watchdog group on anti-Semitic incidents set up jointly by Mazsihisz and EMIH in 2013, there is no evidence suggesting the anti-Soros campaign is increasing anti-Semitic incidents. In its annual report for 2016, the group documented a total of 48 anti-Semitic hate crimes — a 16 percent decrease from the previous year.

The data, compiled according to international standards and without direct government funding, suggest that Hungary, which is home to 100,000 Jews, has the lowest per capita prevalence of anti-Semitic crimes of any EU state with a sizable Jewish population. This includes Britain (1,309 incidents in 2016), France (335) and Germany (461).

Hungary recently saw the opening of a major kosher slaughterhouse in its south amid vows by Orban to protect religious freedoms in his country. It came in stark contrast with steps to limit practices like kosher slaughter in Western Europe “that make life miserable for local Jews,” Koves said.

What these data and trends mean, Koves added, is that “Jewish communities are thriving and safer in Hungary, which is a reliable friend of Israel, than in many countries in Western Europe that do their best to isolate both their Jews and Israel. And the Israeli prime minister is supposed to boycott Hungary or destroy relations with it?”

Besides, Israel has leveraged its diplomacy in memory-related issues in Hungary, at times behind the scenes and at other times publicly, Koves said. He cited the 2012 withdrawal of an invitation to the Israeli Knesset extended to the Hungarian parliament’s speaker, Laszlo Kover, over his attendance at a commemoration of the anti-Semitic author Jozsef Nyiro.

Still, Zuroff said Israel can do more to counter Holocaust distortion and revisionism in Eastern and Central Europe while pursuing its strategic goals.

“Israel has abandoned ship, giving countries like Lithuania, Latvia, Hungary, Ukraine a green light to continue with the vilest forms of Holocaust revisionism that reflect local anti-Semitism,” he said.

Israel needs to forge its foreign relations according to its own strategic road map, Zuroff said, but Jerusalem can still “leverage the fact that Israel has become a powerful economic player, a hub of innovation, to achieve” additional goals.

“There’s a way to do this without harming partnerships,” he said. “But not without political will.”