Jake Tapper and Linda Sarsour mixed it up on Twitter. And it wasn’t about Jews. Or was it? 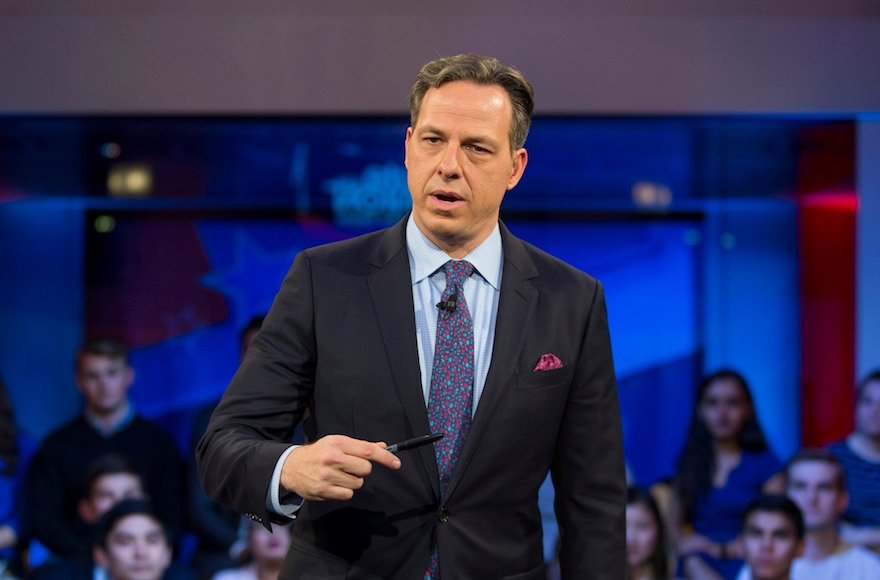 Jake Tapper, the CNN anchor, uses Twitter as a platform to joke, kibbitz with friends and colleagues, and, as he does on his show, “The Lead,” to call out deviations from what he sees as basic American values like tolerance and free speech.

One of his best-known encounters of the latter kind came last year, when he pressed candidate Donald Trump to disavow an endorsement by David Duke, the anti-Semite and racist. (Trump did, eventually.)

So it was odd to see Linda Sarsour, the feminist and Palestinian-American activist, say on Twitter on Tuesday that Tapper had joined “the ranks of the alt-right.”

.@jaketapper joins the ranks of the alt-right to target me online. Welcome to the party.

It was part of a fraught exchange between a Muslim American well known for her friendship with some liberal Jews and for her clashes with the Jewish establishment — she endorses the boycott Israel movement — and a celebrity who makes no secret of his Jewishness. But it was one in which Jews never came up, at least explicitly.

So what started it all?

Tapper earlier on Wednesday criticized Sarsour and the Women’s March — which she helped found — for celebrating the birthday of Assata Shakur, a black militant convicted in the 1973 murder of a New Jersey State Trooper. She was jailed in 1977 and escaped in 1979, eventually fleeing to Cuba, where she lives today. Tapper responded to Sarsour’s birthday greetings by tweeting, “Shakur is a cop-killer fugitive in Cuba. This, ugly sentiments from @lsarsour & @dykemarchchi …Any progressives out there condemning this?” He linked to a Women’s March tweet marking Shakur’s birthday.

Shakur is a cop-killer fugitive in Cuba. This, ugly sentiments from @lsarsour & @dykemarchchi …Any progressives out there condemning this? https://t.co/rXnHLgE2hR

The Women’s March, in an extensive thread, had said that it was feting Shakur because of her role in repudiating sexism in the black nationalist movement, and did not endorse her role in the murder of the trooper.

Sarsour rejoined on Twitter, first with her gibe about Tapper joining the alt-right and then asking him directly: “Please share my ‘ugly’ sentiments? Unapologetically Muslim? Unapologetically Palestinian? Pro-immigrant? Pro-justice? Shame.”

Tapper, replying, referred to Sarsour’s attacks on Ayaan Hirsi Ali, the onetime Muslim who is now an outspoken critic of Islam. Ali has at times said her focus is only on militant Islam, but at other times has targeted the faith more broadly, earning herself a reputation in some quarters as an Islamaphobe.

In a now deleted 2011 tweet, Sarsour, comparing Ali to anti-Islam activist Brigitte Gabriel, had said: “Brigitte Gabriel=Ayaan Hirsi Ali. She’s asking 4 an a$$ whippin’. I wish I could take their vaginas away – they don’t deserve to be women.” (Asked about the tweet recently, she said, “People say stupid shit sometimes.”)

That, Tapper said, was “pretty vile” addressed to Ali, a survivor of female genital mutilation.

This one specifically which is pretty vile to say about a survivor of FGM. https://t.co/Y2NLxzOmt5

So, nothing in this fight is Jewish, right?

Yair Rosenberg, the Tablet blogger, noted on Twitter that Tapper — a graduate of Akiba Hebrew Academy in suburban Philadelphia who frequently celebrates his Jewish upbringing —  came in seventh among Jews in an Anti-Defamation League tally of journalists abused by the alt-right.

Beyond that, there are some hints of a Jewish subtext — that Tapper was coming at this from the perspective of Jewish experience, and that Sarsour understood this. Certainly, Sarsour seemed, by lumping Tapper in with the alt-right, to be seeking to wound him in the way that some folks belittle some black men by referring to them as Uncle Toms.

And Tapper, in his initial tweet pointing out progressive excesses, called out the Chicago Dyke March, for also wishing Shakur a happy birthday. Chicago Dyke March’s only known controversy of late was its ejection of three Jewish marchers for bearing flags marked with the Star of David.

On the other hand, Tapper’s overarching outrage at the happy birthday greeting would appear to stem not from any animus toward Sarsour or anti-Zionists, per se, but toward Shakur. As an ABC reporter in 2011 he aggressively pursued a story about how unhappy New Jersey cops were that President Barack Obama had invited the rapper Common to the White House; Common had recorded a paean to Shakur. As recently as last year Tapper urged fellow journalists travelling to Cuba to ask Shakur if she wanted an interview.

Added bonus irony? Tapper, now reviled by President Donald Trump and many of his followers who consider CNN hopelessly biased, earned kudos in 2011 from conservatives for holding Obama’s feet to the fire.