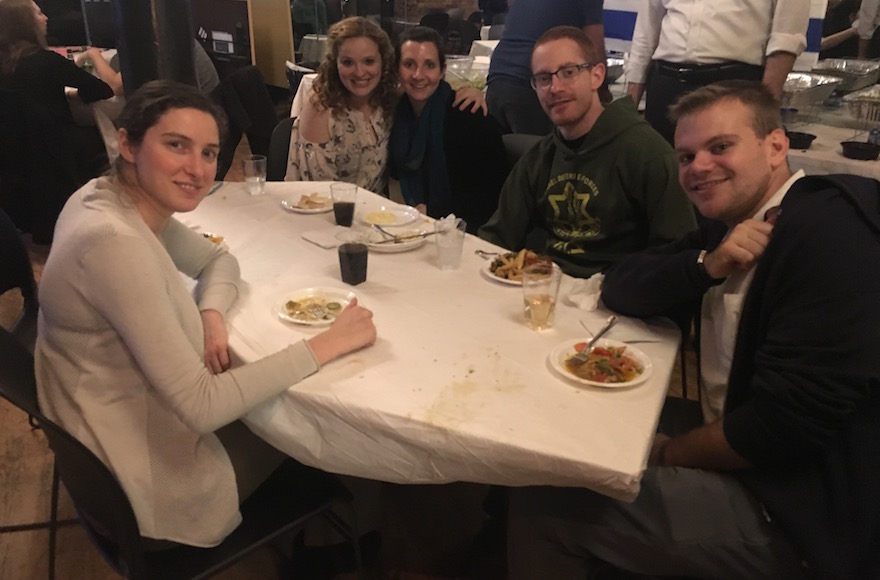 This is the first article in a series examining Jewish groups engaging young professionals.

NEW YORK (JTA) — The scene inside the brick-walled locale minutes from Union Square has the typical trappings of a New York hangout. On a recent Wednesday, 20-somethings in jeans and button-downs crowd around tables, raising their voices to be heard over the loud pop music. The bar is stocked with bottles of Heineken and Blue Moon, wine and mixers for cocktails.

It’s the second part of the evening that sets it apart: Downstairs, the group gathers in a book-filled room to hear rabbis lecture about topics such as the weekly Torah portion, the Jewish calendar, the Jewish perspective on human nature and anti-Semitism.

Some 120 young Jewish professionals — largely not religious — come every week to the signature event by the Manhattan chapter of Meor, an Orthodox Jewish outreach and education group. This is significant at a time when reaching millennials remains a significant challenge for many Jewish organizations.

“We’re starting off with a low demand constituency who’s not looking for Jewish engagement, as opposed to their predecessors,” Cohen told JTA.

The hardest age group to engage is the post-college set, he said.

“They’re not already accessible and organized and socially networked. There’s a high rate of geographic and occupational mobility,” Cohen said. “People move around a lot, they’re hard to find, they’re looking for friends, romantic relationships, building their careers, so they have lots of other pressures, needs that Jewish involvement doesn’t quite address.”

Meor Manhattan caters to a demographic that has already expressed interest in exploring its Judaism: alumni of campus programming by Meor or its partner organization and funder, Olami, a network of Orthodox groups seeking to counter assimilation by reaching out to unaffiliated students. Approximately 60 percent of the participants in the weekly Wednesday event are alumni of Meor or Olami campus programming, according to Meor Manhattan’s executive director, Rabbi Shmuel Lynn.

“We’re not chasing anybody; it’s people who want to come,” Lynn said. “But again, if the crowd is not pitched the right way, they’re not going to want to come. If it’s a meat market, if it’s a singles’ scene, if it’s a place that can be exploited, people are not going to come from work or leave work if they don’t feel comfortable. That’s why the basis of our program is the [Meor Olami] alumni connection.”

Meor, which launched in 2005, is active on 21 colleges and universities across the country, offering paid classes on Judaism, trips to Israel and other programming.

The remaining 40 percent are mostly friends of alumni.

“It’s intelligent, it’s sophisticated,” Lynn said. “We’re not advertising to every Cohen and Goldberg on Facebook in New York. It’s a lot of word of mouth.” 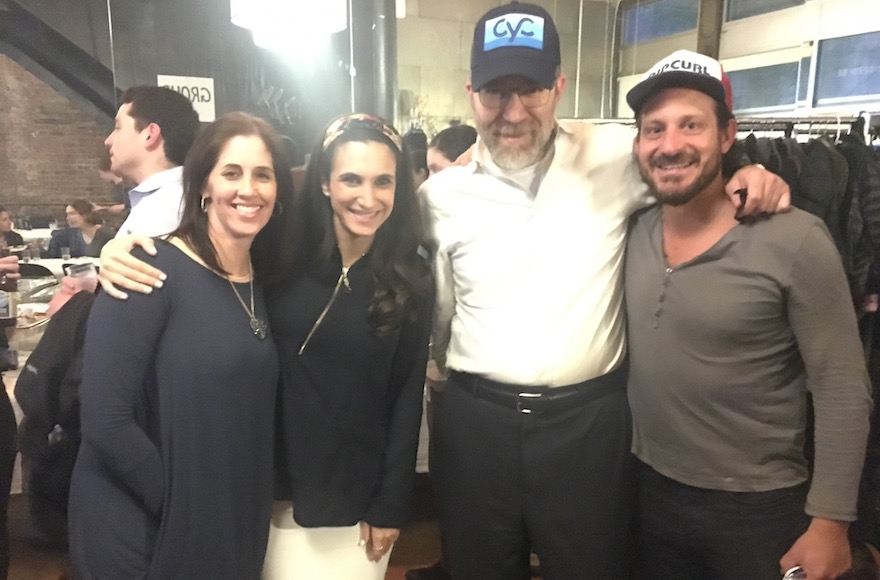 Dave Glicklich learned about Meor as a student at American University, attending a weekly seminar at the nearby George Washington University for which he was paid to attend — a common practice among outreach groups. Participants who complete one eight-week Meor program can earn a $300 stipend or a heavily subsidized trip to Israel.

“[I]t got me hooked” said Glicklich, a 23-year-old development associate at the World Union for Progressive Judaism.

Meor was Glicklich’s first real experience with studying Jewish texts, and it opened up the possibility of adding more spirituality to his life, he said.

“It was riveting, fascinating. I realized that I was living my life in a way that had maybe less meaning than I wanted to. I felt like it gave more purpose,” he said.

Glicklich now attends events about once or twice a week at Meor’s Manhattan location, which launched in 2015 and is the only one offering programming targeted to college graduates. In addition to the Wednesday event, it also offers smaller classes about Jewish texts and Hebrew, subsidized trips and Shabbat programming. 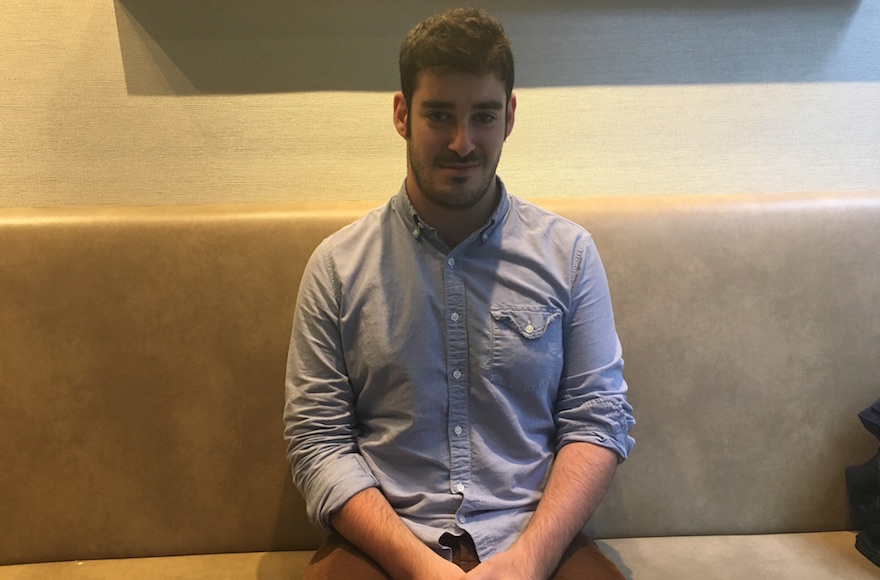 Meor only employs Orthodox instructors, and it counts Olami among its funders, but Lynn said the community is welcoming of those who relate to Judaism in different ways.

“It’s so inclusive, nobody is going to say anything to you,” she said. “They’d rather have you there than not be anywhere. I really like that about the mentality of the organization.”

Green said attending classes at Meor has made her want to live a more observant lifestyle.

“I think definitely long term [I see myself becoming more observant], not this week — but maybe next week,” she said with a laugh.

Green grew up in a small Jewish community in Huntsville, Alabama, and had little knowledge of Judaism before taking a class with the Meor group at Emory University in Atlanta.

There she learned “what Shabbat really entailed, and knowing that kosher was a lot more than not eating pork,” she said. 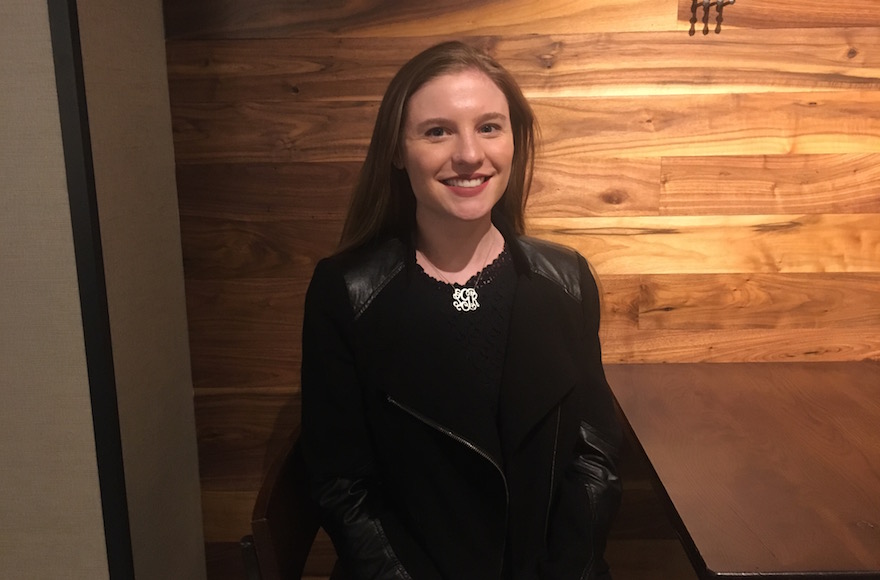 Glicklich, too, expressed a desire to become more observant, though he was not sure when that would happen.

“I need to know why I am doing something, and that’s an important part of Meor for me,” he said.

He added: “It’s easy to live your life in a secular way — all my friends are, my family is — and that’s how I live now. It’s about finding balance with what’s meaningful for me and what’s realistic, but there’s always a connection that’s there. I feel very strongly about defining as such and raising a family in a Jewish way and continuing that.”

Rivka Grossman has already made the change. Growing up in San Diego, Grossman was deeply involved in her family’s Reform synagogue. But after a trip to Israel her junior year of college, where she came in contact with observant Jews, she wanted to learn about Judaism from a traditional perspective. Upon returning to campus at George Washington University in Washington, D.C., Grossman started attending classes with Meor.

“At that time I didn’t know that I was going to be religious, but I wanted to know” more about traditional Judaism, said Grossman, a 23-year-old credit representative at B&H Photo.

Through the classes as well as a Meor summer program in Israel, she learned about Orthodox Judaism and launched a yearlong process of becoming observant, including keeping Shabbat and kosher, and wearing skirts that went past her knees and shirts that cover her elbows. In 2016, she married a man who also became religious through Meor.

Grossman said she may have ended up at the same level of observance without Meor, but that the group “helped facilitate the process.”

Since moving to New York last summer, she has attended only a couple of events at Meor Manhattan.

“I think it’s a really fantastic forum for people who are trying to learn more and trying to grow more and trying to understand their own identity, and I think Meor Manhattan does wonderful work, it’s just not the right place for me [anymore],” she said.

Instead, Grossman prefers attending classes at her Orthodox synagogue in Washington Heights. 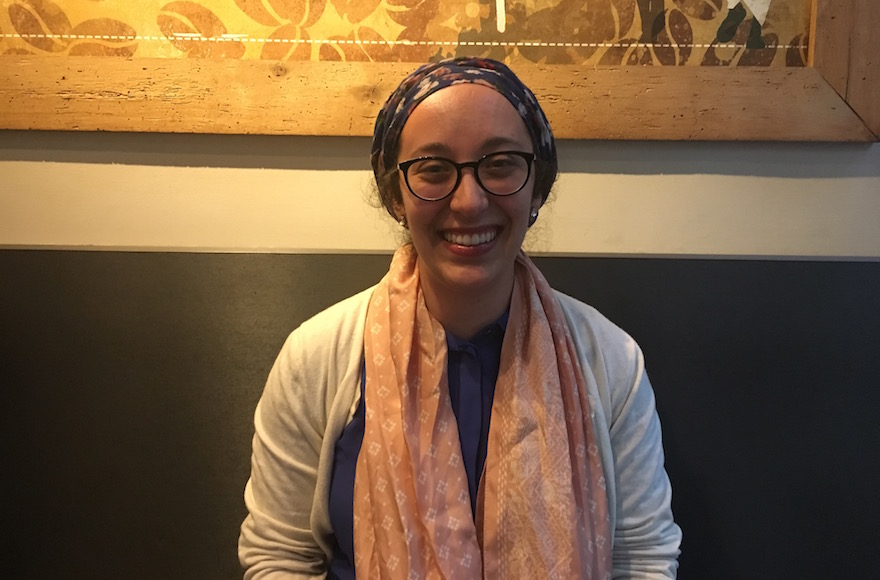 Lynn said Meor educators provide attendees with information so they can make their own decisions about how to identify and practice Judaism.

Though the Meor educators come from a variety of backgrounds — some are from Israel, while others are from the United States and Australia, and some identify as Zionists while others don’t — they all are Orthodox.

“Yes, the staff members we have are people who believe in the Torah, who live very connected integrated Jewish lives, they are keeping Shabbat — not [just keeping] Shabbat one week and not Shabbat another week. They’re role models,” Lynn said.

“People are going to take from them what they want, and they’re going to be inspired to do whatever they are inspired, but these are educators who live what they’re talking about in a very clear way.”

Being exposed to people living an observant lifestyle has had a major impact on Green.

Though Green used to think that doing without TV or attending ball games on Saturdays would be next to impossible, the path seems easier now, she said.

“I always [used to] think, ‘Oh that’s so hard,'” she said, “and then I really think it through and actually it’s really easy, and it’s probably fairly easy to give up for something better.”