This Yiddish film is a rare look into Hasidic Brooklyn life 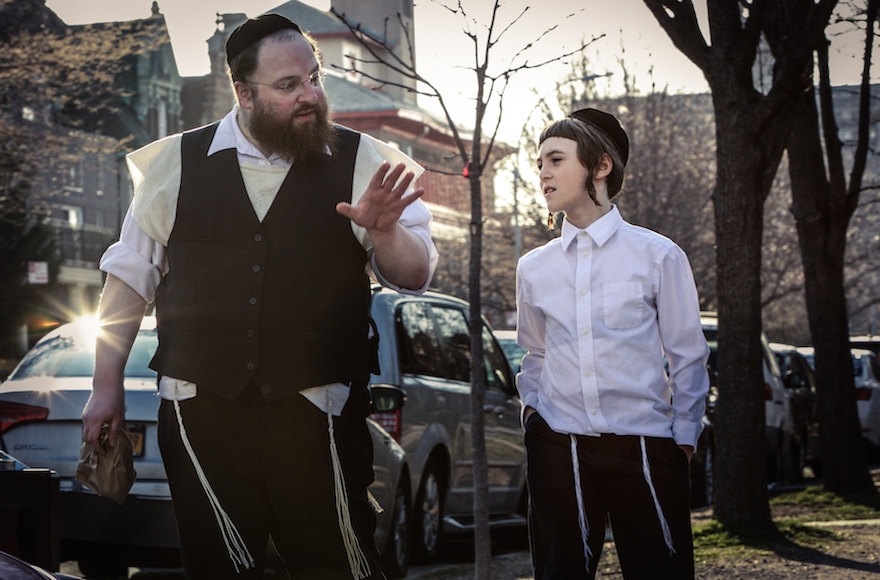 BOSTON (JTA) — With more than a decade’s worth of experience in the film industry, mostly in documentaries, director Joshua Weinstein has released his first feature-length narrative film.

What’s surprising is that Weinstein, a secular Jew, has made a movie entirely in Yiddish.

“Menashe,” about Hasidic Jews in the Borough Park section of Brooklyn, is among the first full-length Yiddish language films to hit the big screen in more than 70 years.

“I love going into small, closed societies and trying to understand and to represent them, and to tell all sides of their stories – the good and the bad – with honesty,” Weinstein, 34, told JTA recently when he and the film’s Hasidic star, Menashe Lustig, attended a screening at the Boston International Film Festival.

Though Weinstein knew he wanted to do a film about the Hasidim, he was not sure at the outset about the topic. He began to spend time among them in Brooklyn — to gain their trust and become familiar with their world.

“You can’t cast a film like this in the usual way – you put on a yarmulke, hang out and show up every single day,” he said. “I was researching and meeting people. I was also trying to find actors because you can only make a film if you can cast it.”

Lustig said a minor miracle occurred when he and Weinstein crossed paths.

“I had been acting very locally in the Hasidic community in a nonprofessional way when Josh approached me after he saw me appear in a short Hasidic commercial,” Lustig said. “We talked together and he said he’d like to make a film with me.”

As Weinstein got to know Lustig and began to hear the details of his life, Weinstein realized he had found his story. A recent widower, Lustig had been pressured by his religious community of Skver Hasidim to yield the rearing of his 9-year-old son to others until he remarried.

“Menashe” tells the story of a 30-something widower and single father, and contrasts the title character’s urge toward self-sufficiency with the demands of traditionalism in a small, tightly knit religious community.

“The whole movie is a 95 percent true story,” Lustig said. “We just touched it up a little bit.”

The film focuses on the decision by the community’s rabbi that Menashe yield the rearing of his son, Rieven, to the family of his late wife’s brother. The decision causes Menashe much anguish, which is made considerably worse by his brother-in-law’s severe and self-righteous demeanor.

In the eyes of the community Menashe, a grocery clerk, is a schlemiel. He bucks authority but, at the same time, does not carry himself in a way that garners respect. Menashe doesn’t want to marry just anyone, however, and he wants to prove he can adequately provide a home for his son.

“It is an emotionally true story,” Weinstein said. “The film expresses how Menashe Lustig actually felt when he went through what he did.”

With the exception of a few lines in English and Spanish — this is Brooklyn, after all — the film’s dialogue occurs entirely in Yiddish.

“The sheer challenge of making a new and unique film about Hasidim in Yiddish was very exciting,” Weinstein said.

It was just one of many challenges facing Weinstein.

The production schedule, for example, was frequently thrown off schedule — some actors who originally signed up, including Lustig, were pressured by their communities not to participate. Fortunately, Weinstein said his background making documentaries, which often depends on bending to the unexpected, gave him the flexibility to see the process through.

Another challenge: Weinstein doesn’t speak Yiddish. And yet, “You couldn’t really make this film in English,” he said. “If it weren’t going to be in Yiddish, then why not just make ‘Home Alone 7’?” (As it happens, one of the executive producers of “Menashe” is Chris Columbus, the director of the wildly successful 1990 movie “Home Alone.”)

Much of the script was written, in English, before filming started, said Weinstein, with translators providing a Yiddish version. Lustig developed some scenes by improvising in English — so Weinstein could understand — then would translate them into Yiddish. After that, with the help of translators, the dialogue was again reviewed carefully.

The accuracy of the words was not taken lightly. In post-production, a team of translators worked on the subtitles — many debates over word choices ensued.

“It was almost like translating the Talmud in some way,” Weinstein said.

“Menashe” will be in theaters in New York and Los Angeles on July 28, with a national rollout to follow.