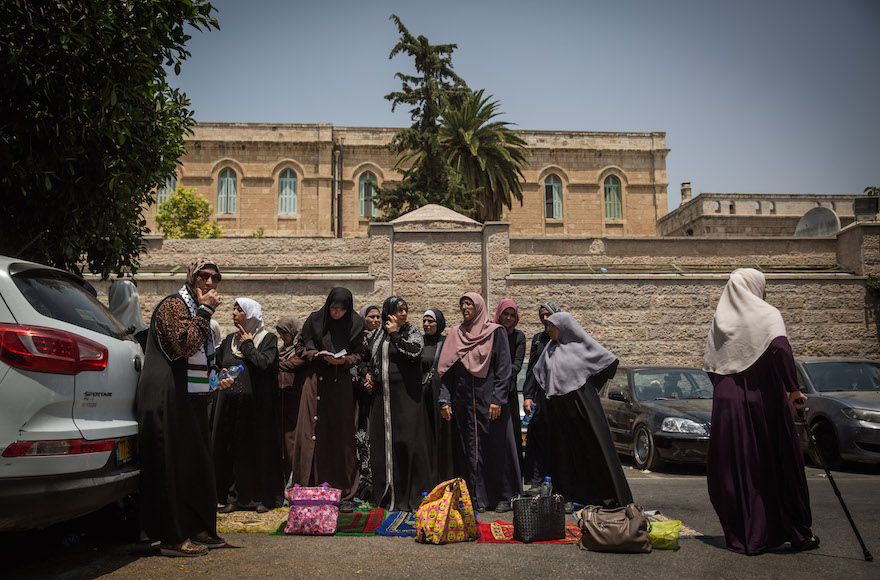 Muslim women protesting at an entrance to the Temple Mount at the Lion's Gate in Jerusalem's Old City, July 25, 2017. Muslim worshippers still refused to pray on the Temple Mount following the government's decision remove the metal detectors and instead place more security cameras on the compound. (Hadas Parush/Flash90)
Advertisement

JERUSALEM (JTA) — Metal detectors and security cameras installed at entrances to the Temple Mount for Muslim worshippers were removed, but  the religious trust that administers the holy sites there said Muslims should continue to stay away.

The Muslim Waqf said Tuesday that it rejected any security measures, including advanced technologies, calling for “completely” free worship for Muslims at the site.

That morning, the security measures that Israel had been put in place less than two weeks ago were completely removed, hours after its Security Cabinet made the decision.

Late Monday night, the Security Cabinet said it would instead incorporate security measures based on advanced technologies, called “smart checks,” and other measures instead of metal detectors. Israel will pay up to 100 million shekels, about $30 million, over the next six months to install the new devices, which include sensitive security cameras.

A Waqf official told The Times of Israel that “the new high-tech cameras” would not be accepted in place of the metal detectors.

A committee representing the Waqf was scheduled to tour the site later Tuesday and review the situation, Haaretz reported.

The new security measures had been put into place after three Arab-Israelis shot and killed two Israeli police officers at the holy site on July 14. Once the  metal detectors were put in place, Muslims refused to enter the Temple Mount, instead praying outside of its gates, leading to clashes and the deaths of at least five Palestinians in recent days.

The decision to remove the devices came after days of intensive consultations among Prime Minister Benjamin Netanyahu, King Abdullah of Jordan and the Trump administration, including President Donald Trump’s special envoy to the region, Jason Greenblatt, who flew in Sunday to help calm the tensions.