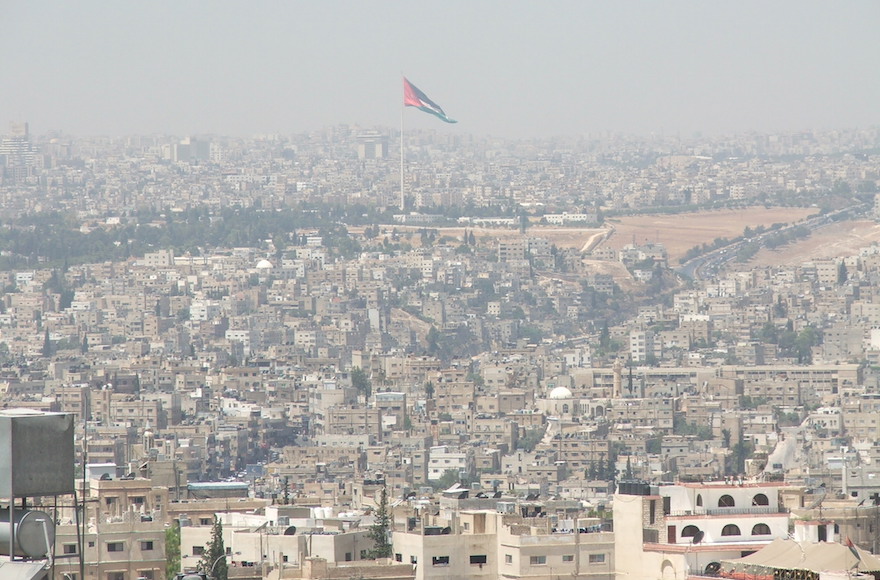 During a 2006 visit to the Jordanian capital of Amman, JTA's Uriel Heilman underwent some invasive security checks when he visited the Israeli Embassy there. (Uriel Heilman)
Advertisement

The order came curt and clipped, and it caught me by surprise.

“Drop your pants,” he repeated sternly.

I had been subject to the indignities of Israeli security before, but never this.

I was in a holding area of the Israeli Embassy in Amman, Jordan, on my way to a meeting with a senior Israeli official in the building. I had been thoroughly vetted: They knew I was a journalist, I had an appointment with a senior embassy official to talk about Israeli-Jordanian relations and the meeting had been facilitated by a high-level contact of mine at the Israeli Defense Ministry.

So why was this guard now telling me he needed to look inside my underpants?

I was reminded of my experience this week when I heard the news on Sunday that an assailant in Jordan who had been hired to move furniture stabbed an Israeli Embassy guard with a screwdriver before being shot dead by the guard.

My visit to Jordan took place more than a decade ago, in 2006, during a relatively quiet time in the Middle East. I was in the Hashemite Kingdom to write a series of stories for JTA, and I had been making the rounds in Amman.

The day before, I had visited the University of Jordan, where I was surprised to find a Star of David spray-painted on the steps leading to the school’s Department of Shariah Islamic Law. Only later that evening did I realize that the star was there so that visitors could stamp on the Jewish and Israeli symbol every time they entered the building. 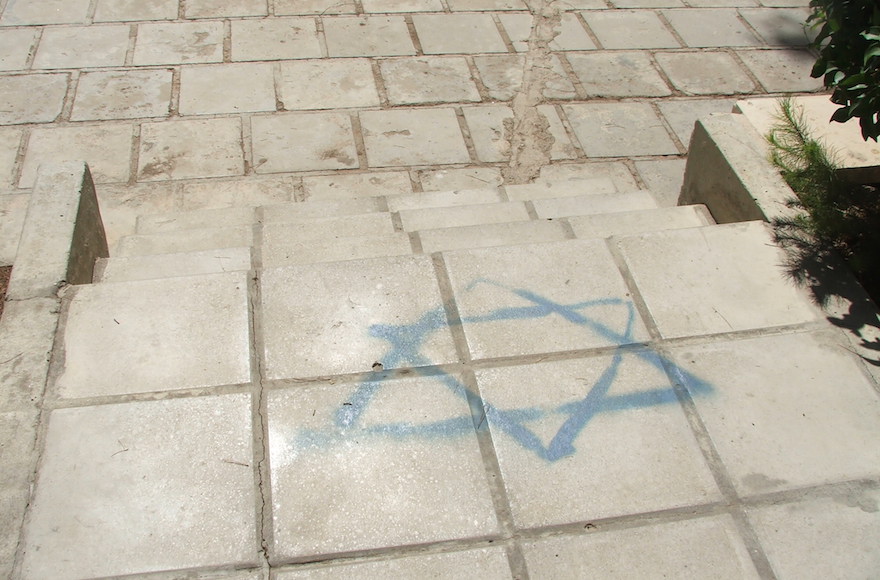 The Star of David that Uriel Heilman found outside the University of Jordan’s law department in 2006 was there so visitors could step all over the Jewish and Israeli symbol on their way to class. (Heilman)

It was a busy trip. I met with government officials and political scientists, toured gritty streets in Palestinian refugee camps and had a secret rendezvous with a Muslim Brotherhood official in a hotel lobby.

I had come to the country on my own, entering Jordan overland from Israel at the Allenby Bridge crossing in the West Bank. Traversing the border had taken much longer than I had anticipated, and by the time I got through I was late to a meeting at the Jordanian Defense Ministry. So I took a cab straight there, showing up for my meeting nearly an hour late and wheeling the large suitcase I had brought for my trip.

The ministry staff waved me right through with a smile, nobody giving my suitcase – or its contents – a second thought.

But the Israeli Embassy, located in an upscale Amman neighborhood, was more like a fortress. Guards had shouted at me angrily as I tried to approach the building, and let me enter only when I explained in fluent Hebrew who I was. I had encountered nervousness among security staff at Israeli embassies before – just six months earlier I had experienced similar skittishness outside the Israeli Embassy in Addis Ababa, Ethiopia, and security staff at the Israeli Mission to the United Nations in New York once inexplicably confiscated my lunch – but that was nothing compared to Amman.

In the holding area, guards rifled through the contents of my bag, turning on and off my camera and closely examining my audio recorder — this was in the pre-smartphone era. They opened my wallet and removed its contents, examining the credit cards and cash as if they could have been laced with anthrax. They told me I couldn’t bring any of my equipment into the meeting except my pen and a notebook.

Then they told me to drop my pants.

At first I angrily refused, face flushed, voice rising. From my experience, outrage often works in Israel, especially with authority figures. In America, the opposite is true: Losing your cool with someone in a position of authority, like airport security or police, can land you in big trouble.

But in Israel yelling is part of the national culture and an acceptable part of negotiation – a symbol that you’re no “frier,” or sucker. It’s often met with grudging respect and some kind of compromise.

So after some back and forth I finally dropped my pants. Then they told me they needed to look inside my underpants.

I got real hot under the collar – except by this time my shirt was off, too.

“Is this really necessary?” I said furiously, my heart pumping like mad. In the back of my mind, I was thinking: Why today, of all days, did I choose to wear my tighty-whities?

The security officers were calm. If you don’t let us look, you can’t go in, they told me.

I hesitated. Then, clenching my teeth and looking at the ceiling, I pulled out the waistband.

A moment later my pants were back on and I was led into a cozy office where I had a leisurely off-the-record chat with my interlocutor at the embassy. He offered me tea and sympathy, and we talked not just about Israeli-Jordanian strategic ties, but the personal challenges of an embassy posting in a country where security protocol bars you from going out at night or even taking a walk around the block. Israeli Embassy staffers in Amman are prisoners in their own embassy, which has a residential complex on site so staffers never have to leave the building.

Given the occasional paroxysms of violence against Israelis in places like this – recall the mob who stormed and ransacked Israel’s embassy in Egypt in September 2011, the Jordanian soldier who opened fire and killed seven Israeli schoolgirls in 1997, a 2000 episode where an Israeli Embassy official was shot in Amman, or this week’s screwdriver attack — those security concerns seem justified. You can certainly understand the atmosphere of high alert behind Sunday’s incident.

And given the indignities others have to endure at the hands of authorities – not least, minorities and immigrants in my own United States — my little episode at the embassy in Amman should be easily forgotten.

But did they really need to look inside my underpants?