Soon there will only be one Judaica store left in Manhattan 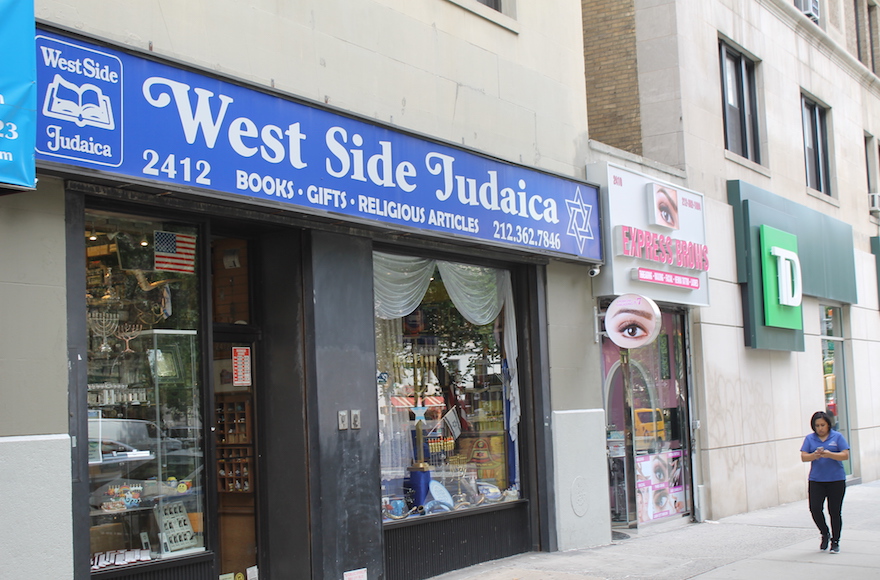 West Side Judaica, which has sold Jewish books and ritual objects in the heavily Jewish neighborhood of Manhattan's Upper West Side for decades, will close soon due to rising rent and increased competition from online retailers. (Ben Sales)
Advertisement

NEW YORK (JTA) —  Yaakov Seltzer remembers a different world, when he would sell his customers prayer books, then hand them an invitation to his daughter’s wedding.

When they would come in to Seltzer’s store to order a kippah for their new grandson, then ask him to attend the bris.

Or they would stop in on a Friday afternoon with nothing to buy, just to wish him a good Shabbat.

But though the Upper West Side of Manhattan is still heavily Jewish, the world Seltzer longs for has disappeared. And soon, so will his store, West Side Judaica, which Seltzer plans to close sometime next year.

When it shutters, after 83 years in operation, the neighborhood will be bereft of a Jewish bookstore. Only one Jewish bookstore, J. Levine Books and Judaica, will remain in all of Manhattan. The store’s closing was first reported Wednesday in the West Side Rag.

“I miss the people I used to have come into the store every week,” Seltzer told JTA. “The new generation doesn’t support us. They don’t know us personally because they use online [stores]. They don’t feel obligated.”

Seltzer made the decision to close after an automatic rent increase in his lease kicked in three months ago. He said the rent, combined with declining sales due to competition from online retailers, made the business unprofitable.

In the past decade, the store’s sales have been cut by more than half. For the first time in memory, Seltzer said, last week the store had a day with less than $1,000 in revenue — barely enough to make the new rent of $24,000 a month. He said he hasn’t taken home a salary in three months.

“It’s an online world,” Seltzer said. “There’s no way I can pay $24,000 a month in rent and compete with someone online who’s selling without any of my expenses.”

Several boutique Judaica stores will remain in Manhattan, mostly connected to museums or synagogues. West Side Judaica and J. Levine are the only ones selling a broad range of Jewish books and objects to Jews across the spectrum.

Nor is Daniel Levine, the fourth-generation owner of J. Levine’s, worried about meeting the same fate as West Side Judaica. Levine’s Midtown store has invested heavily in an online presence, including selling goods as a third party on Amazon. Between 2007 and 2012, Levine saw his revenue rise 20 percent. Since then, he said, it’s grown even more.

Plus, Levine’s relatives own his shop’s building — so he said he pays half as much as Seltzer in rent.

But Levine isn’t celebrating his newfound monopoly over Manhattan. He and Seltzer, separated by 50 city blocks, worked more as partners than competitors. They stayed in close touch and would send each other items when a customer asked for something that was out of stock.

After speaking to me, Levine’s first call was to check in on Seltzer, whom he calls “Yanky.”

“It’s a little scary to be the only Judaica store left in Manhattan,” Levine said, adding that if Amazon takes more of a toll from the Judaica business, people “won’t be able to physically see these things and touch them.” 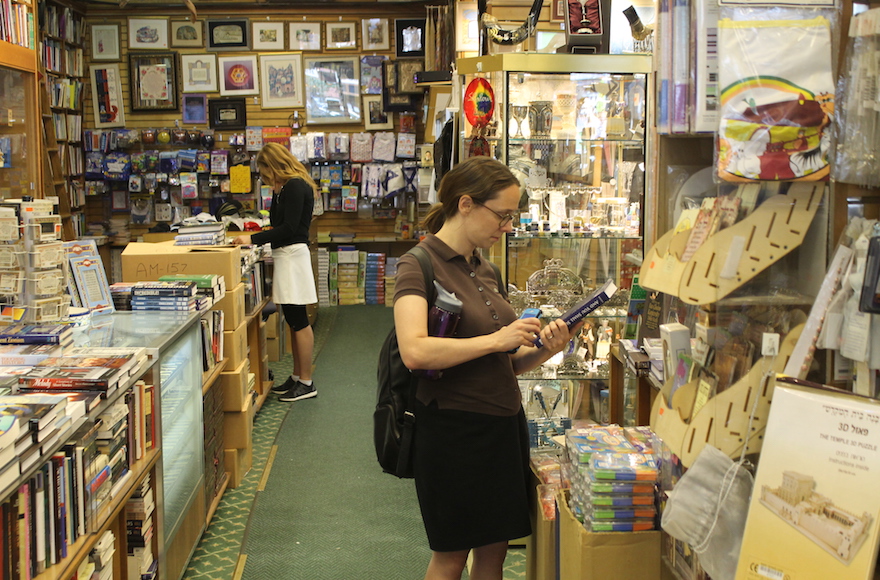 Seltzer also shifted his business in an effort to stay afloat. He once sold 80 percent books and 20 percent Judaica. Now it’s 50-50. The right side of the store looks largely like a standard-issue Jewish book shop: volumes from the Orthodox publisher ArtScroll sitting regally on the shelves next to specialty volumes on medical ethics, biblical geography and how to comfort mourners; a rack of prayer shawls in the back; a stack of framed Jewish wedding contracts up front.

But the left side is an emporium of novelties made for an Orthodox Jewish clientele with money to spend. There are greeting cards embossed with menorahs, birthday wishes in Hebrew or “Welcome to your new yeshiva.” There’s a line of games from Magical Mitzvah Park to Cholent, The Game! The Slow-Cooking, Fast-Moving Strategy Card Game.

At the front, a mesh sports shirt with ritual fringes hangs in the window. Nearby is a lectern used by religious Jews for prayer or study. Long, twisting shofars dangle from the ceiling. But in many cases, Seltzer said, the variety doesn’t help. Customers will photograph items with their phones and then buy online.

“I personally don’t think it’s ethical to take pictures, but my employees don’t want to be police,” he said.

Local Jewish schools and synagogues still buy from West Side Judaica, though that business has also declined. Lisa Exler, director of Jewish studies for the nondenominational Beit Rabban Day School a couple blocks away, still buys some books from Seltzer. The school orders its prayer books and Pentateuchs directly from Koren Publishers Jerusalem, an Israeli company. But Exler turns to West Side Judaica for niche items, like collections of Bible commentaries or the small, blue, right-to-left workbooks traditionally used in Jewish schools.

“They were super friendly, always happy to show me different books,” Exler said.

When she was choosing among Bible commentaries, an employee “showed me there’s this version and that version, this has a better binding and lasts longer. He knows his merchandise, and took the time to make sure I was getting what the students needed.”

Over the years he has hired family, employing his wife, mother, brother and brother-in-law. On Wednesday afternoon, three relatives talked in Yiddish as one wrapped a gift and another rang up one of the few customers in the store.

Seltzer has considered moving about half a mile up Broadway, where he could pay $15,000 a month. But at 60, he doesn’t have the energy for another move and the costs it involves. He will begin a going out of business sale soon, and will close sometime after Hanukkah, near the end of the calendar year.

And after that? Seltzer isn’t sure.

If he gets an influx of revenue, he may change his mind, though Seltzer said he does not want to be “the boy who cried wolf.” More likely, he anticipates doing what most in his situation have done: Take his decades of experience and connections with publishers, and sell books and Judaica online.

With the efficiency of shipping nowadays, Seltzer doesn’t even think he’ll need to keep an inventory.

“You can have a big website, and you think they have everything,” he said. “They have nothing.”