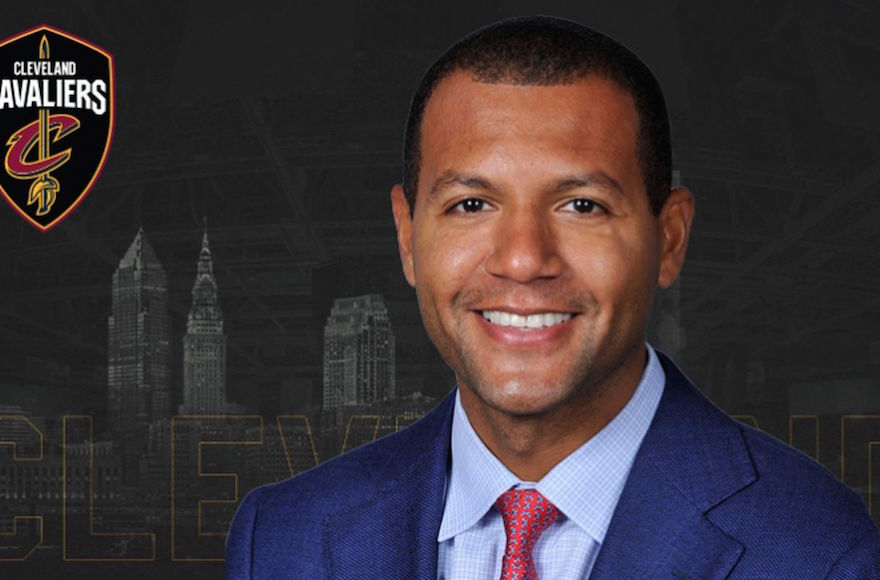 (JTA) — The team that brought you Maccabi Tel Aviv’s David Blatt as coach, led by a Jewish owner in Dan Gilbert, now has a Jewish general manager.

Koby Altman, 34, was named GM of the Cleveland Cavaliers on Thursday after serving as an interim replacement for the past five weeks.

He may need some help from Hashem to keep the Cavs on the championship path, what with one of their top players, Kyrie Irving, reportedly requesting a trade off the LeBron James-powered squad after it was vanquished by the Golden State Warriors in the NBA Finals last month.

At a news conference with Gilbert alongside, Altman noted the team’s “unprecedented success” over the past three seasons – consecutive appearances in the Finals and a title capping the 2015-16 campaign, the Cleveland Jewish News reported.

Blatt was the Cavs’ coach until he was dismissed in January with Cleveland holding the best record in the Eastern Conference. Assistant Tyronn Lue took over for the championship run and remains the head coach. The previous season, Blatt had guided the Cavaliers to the Finals – a losing effort to the Warriors.

Altman, a native of Brooklyn, New York, has been leading the front office since David Griffin left the organization after serving three years as general manager. He and the team could not reach an agreement on a contract extension.

Regarding Irving, Gilbert said he heard about the request from media reports and did not confirm whether the All-Star performer had made the request.

Altman was promoted to assistant general manager last September from director of pro personnel. He had joined the Cavs in 2012 as pro personnel manager.

Altman was a three-year starter at point guard for Middlebury College in Vermont.

He is the second Jewish GM in Cavs’ history: Harry Weltman held the post from 1982 to 1986. Under his direction, the Cavs made the playoffs for the first time in seven years, in 1984-85.