How ‘The Red Tent’ invented a new kind of fiction 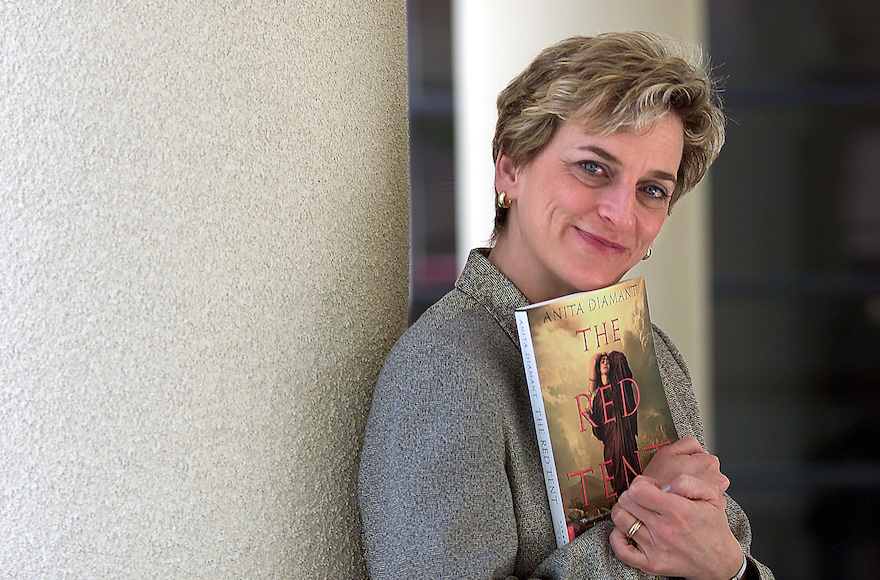 Anita Diamant with a copy of "The Red Tent" in 2000. (David Bohrer/Los Angeles Times via Getty Images)
Advertisement

(JTA) — Twenty years ago this summer, Anita Diamant — a freelance writer and author of several nonfiction books about Jewish practice, including “The New Jewish Wedding” — was awaiting the publication of her first novel. It was a work of historical fiction, set in biblical times, that focused on the story of Dinah, the only daughter of Jacob and Leah.

The book was called “The Red Tent,” and it has since achieved iconic status. The novel has sold millions of copies around the world and was adapted into a 2014 Lifetime miniseries starring Minnie Driver.

But “The Red Tent” did not become a best-seller when it first hit shelves in 1997. In fact, Diamant never expected such extraordinary success.

“It was not a given that the book was going to get published” at all, Diamant told JTA in a recent interview, describing the difficulties she encountered in trying to find a literary agent to represent the project.

The novel, Diamant recalled, seemed to strike people as “a weird idea.”

Dinah receives only brief attention in the Bible, and her story is a violent one. In Diamant’s book, the Dinah narrative expands, revealing a fuller, fictionalized understanding of her life — as well as a powerful portrait of ancient feminine community and experience.

Alongside her work on other writing projects, Diamant spent about three years drafting “The Red Tent.” Eventually it sold to St. Martin’s Press, and Diamant received a modest advance.

The novel sold reasonably well for a debut and subsequently was issued in paperback. Still, the publisher was planning to destroy (or “pulp”) some remaining hardcover copies.

At that point, Diamant had an idea: Why not ship the books directly to select groups of readers? The publisher agreed, and several copies went to members of the Women’s Rabbinic Network, a group of women in the Reform rabbinate. Another batch went to members of the Reconstructionist Rabbinic Assembly. In both cases, the books were accompanied by letters of endorsement from the organizations’ presidents, both personal friends of Diamant.

From there, word about “The Red Tent” spread. Ultimately, Diamant credits independent book stores and book clubs for making the novel a best-seller. In June 2001, nearly four years after publication, “The Red Tent” won the Book Sense Book of the Year Award for Adult Fiction, now known as the Indies Choice Book Award.

Diamant has since published four novels and continued to write nonfiction. (“The New Jewish Wedding” was updated, redesigned and revised as “The Jewish Wedding Now” and re-released earlier this year.)

“I’m eternally grateful to readers for whom the book has meant so much,” Diamant said of “The Red Tent.” “And it means such different things to different people.”

“I’m still kind of amazed at its success. I’m touched by the way people find inspiration in it for all kinds of things.”

Some fans, Diamant notes, credit the book for steering them to work as midwives. Others say “The Red Tent” inspired them to become artisanal bread bakers or to study the Bible — or to write biblical fiction of their own.

Thanks to the success of “The Red Tent,” lovers of historical fiction can enjoy an ever-growing number of books that reimagine the lives of biblical characters. In many cases, these novels, like Diamant’s, give voices to lesser-known (and often female) individuals. Here is a sampling of some of the best that have been published in recent years.

Sinners and the Sea: The Untold Story of Noah’s Wife (Howard Books, 2013)
By Rebecca Kanner

Although the Bible doesn’t name her, Noah’s wife was on the ark, too. Kanner’s debut novel gives her a voice — but still no name — as she tells us, in the first person, about her early years, her marriage and family, and everything that happened on that giant ship.

After Abel and Other Stories (Prospect Park Books, 2015)
By Michal Lemberger; foreword by Jonathan Kirsch

Each of the nine stories in this book presents a tale of a biblical woman. Some you’ve likely heard of, like Miriam, who sets the basket holding her baby brother afloat in Nile, follows its course and approaches the woman who retrieves it: Pharaoh’s daughter. Others focus on characters who are less well known, such as Zeresh, Haman’s not-so-nice spouse, who suffers consequences, just as her husband does when his evil plot goes awry.

King David, the focus of this novel, isn’t exactly a minor biblical figure. But his circle was large, and Brooks attends closely to many of the characters — men and women, like the prophet Natan and Nizevet, David’s mother — who were closest to him in this chronicle of key episodes in David’s life.

The inspiration for this book was the biblical princess Michal, who is most popularly identified as King Saul’s daughter or as King David’s wife. “But even at the beginning my research,” Brandes wrote in the preface, “I realized that a historical novel about the destruction of the House of Saul at the hands of David could not make do with a single protagonist.” Thus, this novel — which was a best-seller in Israel, where it was published in 2008 under the title “Kings III” —  is a compelling, multigenerational saga.

This novel reimagines tales of King David and his contemporaries, including the fearsome Goliath. Boorstin conjures up a new female character: Goliath’s wife, Nara, who in this telling exerts considerable influence on the outcome of one of the most famous biblical battles.