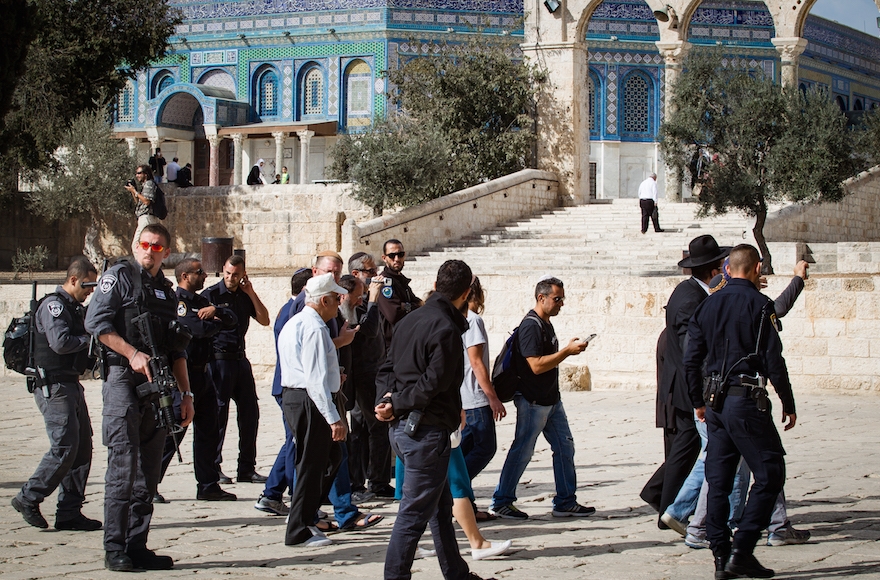 At least 1,046 Jews visited the site on the observance of Tisha b’Av by early afternoon. More were expected to visit later in the day when the site reopens to visitors, Haaretz reported, citing Jewish Temple Mount activists.

The fast day marks the destruction of both the First and Second Temples in Jerusalem.

On Jerusalem Day, in May, some 900 Jews visited the Temple Mount.

The visitors passed through metal detectors at the Mughrabi Gate, the only one allotted for non-Muslim visitors to the site. They were required to leave their identity cards at the gate before entering.

Seven people were detained after fighting between Jews and Muslim worshippers at the site, according to Israel Police. Six Jews were arrested after praying there, according to reports.

Tens of thousands also were expected to visit the Western Wall throughout the course of the day after thousands gathered at the site on Monday night to read the Book of Lamentations.

The mass influx of visitors comes after nearly two weeks of tensions roiled the site over increased security measures, including metal detectors, following an attack on the Temple Mount that left two Israel Police officers and their three Arab-Israeli gunmen dead.