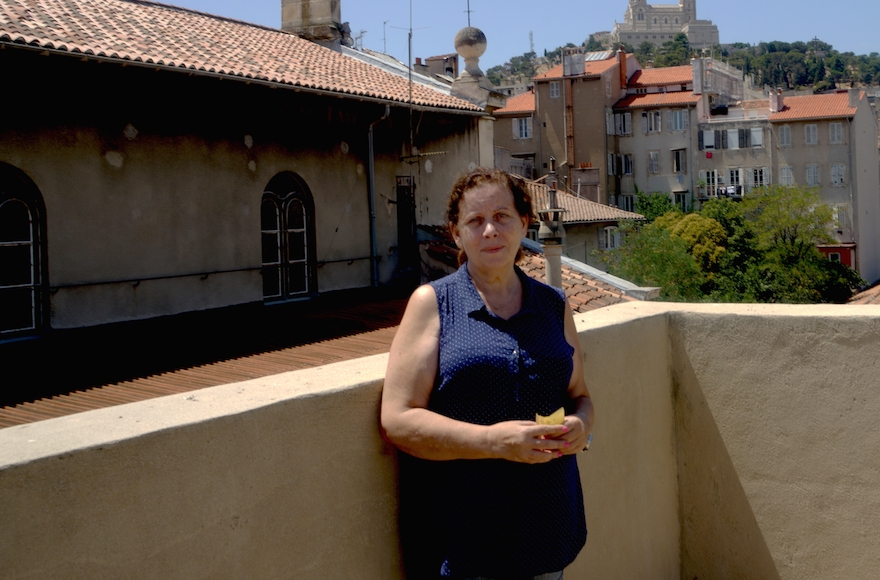 MARSEILLE, France (JTA) — The Edmond Fleg Center is the cultural heart of France’s second largest Jewish community, even if its facade resembles a prison.

But behind the exterior of security cameras and blast-proof doors – a response to anti-Semitic attacks in recent years on members of Marseille’s Jewish community of 80,000 – this five-story building is nonetheless an attempt at welcoming one and all into a space that encourages unity.

Jews of all denominations come here for activities and workshops. There’s a state-of-the-art cinema, a breezy terrace roof and regional offices of the major Jewish groups in France.

One thing that’s absent: a synagogue. And that’s by design. The lack of a dedicated space for worship at the center, which was established 53 years ago, is meant to emphasize the shared culture that connects all French Jews, regardless of their level of observance, the center’s president, Raymond Arouch, told JTA last month.

But that changed this summer. In June, after hosting an event where women read the Torah aloud, the Edmond Fleg Center for the first time emerged as a flash point that exposed bitter divisions within France’s Jewish community.

Held in one of Europe’s most deeply conservative Jewish communities, the event triggered furious criticism by religious authorities – including a rabbinical judge who warned of an impending divine reckoning. It also prompted two small demonstrations by young Orthodox men and a slew of insults and threats by other French Jews, in Marseille and beyond.

The violent opposition to the event — a graduation ceremony for a seminar about women in Judaism — surprised and shocked Martine Yana, the center’s director. She said the protests demonstrated the need for conversations about women’s roles within Orthodox Judaism in France.

“I know this is a very conservative community,” Yana said of Marseille, where only three out of some 50 synagogue are not Orthodox, “but even I never imagined it would generate such reactions.”

“I would have canceled the event to keep the peace, but we found ourselves under attack,” she added. “It’s a very painful position for an institution like ours.”

The scandal, which Yana said is indicative of growing radicalization and insularity in France’s traumatized Jewish communities, erupted a few days before the June 24 event. Shmouel Melloul, a dayan, or rabbinical judge, wrote an impassioned plea for the cancellation of the event and for prayers to God so He may “spare the city His wrath” over the affair.

“We are all furious, terribly disturbed and outraged over this precedent,” he wrote of the event, in which a mixed crowd of men and women read aloud the weekly Torah portion. “It is urgent and imperative to forcefully and rapidly protest” for its cancellation.

Answering this call to arms, a small group of young men twice gathered around the center, asking visitors to boycott the institution in what Yana said was an act of intimidation. Dozens of men and women left offensive remarks on the center’s Facebook page or called the center’s switchboard.

One of them, a Facebook user by the name of David Bendennoune, wished the center “the same fate as Korah,” a biblical rebel whom the earth swallowed whole without a trace.

Yana, for her part, published a statement on the center’s Facebook page condemning the violent rhetoric. She told JTA that “the growing radicalism exposed in this affair makes me afraid for my safety, not only from Muslim radicals, but now also from Jewish ones.”

As the affair intensified, there was an attempt to temper the flames by the Marseille branch of the Consistoire – a 210-year-old state-recognized Orthodox body that employs rabbis and caters to the religious needs of Jewish communities.

Events featuring women reading aloud from the Torah are “not forbidden but not recommended either,” Consistoire spokesman Michel Cohen-Tenoudji told La Croix daily. But, he added, his organization was opposed to the event because it mixes women and men.

Several prominent Orthodox rabbis have ruled that the reading aloud of the Torah by women at synagogue is permissible according to halachah, the Jewish code of law, as long as the sexes remain separated at synagogue. And in the United States and Israel, some Orthodox synagogues allow women to chant from the Torah, and some employ women as clergy.

But the French Jewish community is “30 years arrears, and continuing to regress,” according to Liliane Vana, a philologist and expert on Jewish law and the Talmud —  a central text of Jewish tradition. Vana also counsels women and men appearing before the beit din, or rabbinical court, on the dos and don’ts of divorce in Judaism.

Vana, a co-organizer of the controversial event in Marseille, sees this radicalization also in the treatment of gay people. Deviating from a don’t-ask-don’t-tell modus vivendi of previous years, some Orthodox rabbis in France have begun to refuse to allow gays to take part in religious ceremonies.

This change coincides with a demographic shift within French Jewry, which beginning in the 1950s became predominantly Sephardic following waves of immigration by Jews from North Africa and Arab countries. The influx followed the annihilation of a quarter of France’s predominantly Ashkenazi population during World War II.

The increase in violent anti-Semitism in France – hundreds of cases are now recorded annually, compared with dozens prior to the year 2000 – is further contributing to isolationism, according to Delphine Horvilleur, a Liberal, or Reform, rabbi from Paris.

“It’s shutting down the debate and adding to an atmosphere of siege that does not encourage self-reflection,” she said.

The perceived radicalization is alienating some French Jews from Orthodoxy and sending into the open arms of the country’s small but growing Liberal stream of Judaism. Horvilleur’s synagogue, MJLF Beaugrenelle, is one of the best attended in Paris, with hundreds of families filling the synagogue to capacity on holidays.

Horvilleur was recently invited to officiate alongside the Orthodox chief rabbi, Haim Korsia, at the funeral of Simone Weil, a Holocaust survivor who became health minister and one of France’s most influential politicians before her death on June 30 at 89. Though it was not Korsia’s choice – his office attempted to downplay Horvilleur’s role at the funeral – the ceremony was nonetheless an interdenominational first in France.

But Horvilleur, too, sees French Jewry as “folding inwards” and becoming radicalized. Partly, she says, this is because of the Consistorial model, which makes Orthodox Jewry the only stream with state recognition.

And whereas the Consistoire and Korsia have addressed women’s rights – Korsia recently pressured a recalcitrant and abusive husband into granting his wife a divorce after 29 years – “there is little sign that things are changing,” Horvilleur told JTA.

The brouhaha in Marseille is divisive and reflective of “the refusal of French Orthodoxy to let in any measurement of change,” she said. “But the very fact it is happening maybe is a sign of a belated start of change despite everything.”