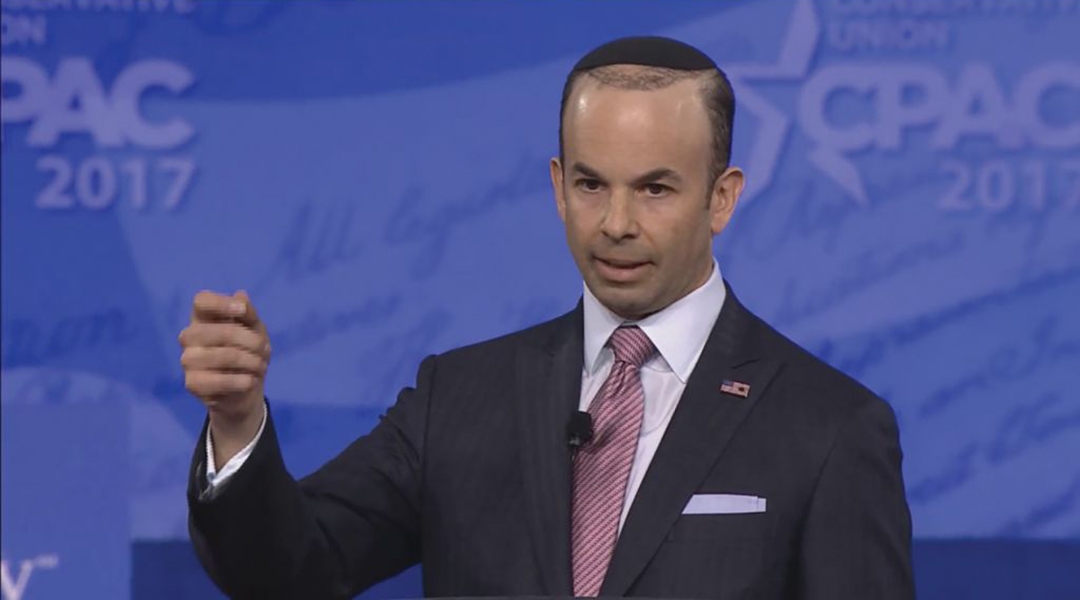 In February, Sander Gerber, chief executive of a New York-based hedge fund, mounted the stage at an influential annual gathering of conservative activists and elected officials from across the United States.

“Thanks for the opportunity to share something surprising, something that frankly I didn’t know,” said Gerber in his talk at the Conservative Political Action Conference (CPAC), which describes itself the “birthplace” of modern conservatism.

Gerber, wearing a knitted black kipa, proceeded to educate the audience about the Palestinian Authority’s “pay to slay” program, a system codified in the Palestinian governing body’s law that administers financial payments to convicted terrorists and the families of Palestinians who commit violence against Israelis or Americans.

The U.S. taxpayer foots some of the bill for those payments as part of America’s approximately $400 million a year foreign aid package to the Palestinian territories.

But perhaps not for long, as a result of a bill that is moving quickly to the Senate floor. Known as the Taylor Force Act — named in memory of the Texas-native and West Point graduate who was stabbed to death by a Palestinian assailant while visiting Tel Aviv in 2016 — the legislation, which has since received bipartisan support, was passed by the Senate Foreign Relations Committee last Thursday on a 17-to-4 vote.

Should it pass, the bill would compel the State Department to cut off funding to the PA if it directs any funds toward terrorists or their families. The PA would also be required to take “credible steps” against incitement to violence against Israelis and Americans.

On Monday, Senate Minority Leader Charles Schumer added his name as a co-sponsor of the bill, cementing bipartisan support for the legislation and almost assuring it will become law.

Who, then is Sander Gerber, the man who many believe was instrumental in bringing the P.A.’s practice of payments to terrorists and their families into public view?

Who, then is Sander Gerber, the man who many believe was instrumental in bringing the P.A.’s practice of payments to terrorists and their families into public view?

The Ann Arbor, Mich., native and 1989 University of Pennsylvania graduate is an observant Jew who lives in Manhattan and has been involved in Israel policy for “decades.” Chief executive and investment officer at Hudson Bay Capital Management, Gerber, who also graduated with honors from the Wharton School, became a member of the American Stock Exchange in 1991; today, he has over 20 years of experience developing and trading securities.

In 2005, Gerber, always a passionate advocate for the Jewish people according to those close to him, represented the United States at the Organization for Security and Co-operation in Europe (OSCE) Conference on Anti-Semitism and Other Intolerances in Cordoba, Spain. In 2006, he was appointed as a trustee of the Woodrow Wilson International Center for Scholars, a non-partisan policy forum for tackling global issues.

A family man, Gerber took action on this issue after Force’s murder in 2016. “I contacted his family, who are such special and warm people,” Gerber told The Jewish Week in an exclusive interview. “My children are especially fond of them.” The Force family was “determined to create positive out of their loss,” Gerber said, and with him to Washington to start lobbying on the issue.

Determined to buoy his message with hard data, Gerber, who has served in advisory roles dealing with international terrorist financing since 9/11, turned to decoding the P.A.’s budget, available online. Since it is written in Arabic, he worked with former Brig.-Gen Yossi Kuperwasser, a senior intelligence officer for the Israel Defense Forces, to translate the PA’s laws on the matter line-by-line.

The process, Gerber said, “enabled me to understand that the PA had created an infrastructure to indoctrinate, reward and incentivize their people to become terrorists.”

The report of his findings, published last month by the Jerusalem Center for Public Affairs (JCPA), found that the PA spends over $300 million a year to distribute cash and benefits to incarcerated and released Palestinian prisoners, many of whom are convicted terrorists, and to the “families of martyrs” — nearly 8 percent of the PA’s $4 billion budget. (Gerber, a fellow at JCPA, partnered closely with the think tank on the study. He also credited the Orthodox Union, Christians United for Israel and the Republican Jewish Coalition for advancing the effort.)

Tamar Elashvili, a research assistant at JCPA who worked closely with Gerber to publish the findings, told The Jewish Week he was “essential” to “uncovering and publicizing this data.”

“When I learned that the PA had laws to kill the Jews, I couldn’t sleep at night,” said Gerber.

“This was clearly driven by passion and a desire to see justice served,” said Elashvili.

“When I learned that the PA had laws to kill the Jews, I couldn’t sleep at night,” said Gerber, who eschews the limelight. “Even more disturbing was that I had been completely unaware. Frankly, I was ashamed of myself.

“This issue is not just about money,” he said. “It’s really about the nature and narrative of the PA, which lies to the West by not just allowing, but actually sponsoring a society that is focused on violence against Israel.”

“Sander Gerber brought me this issue, explaining to me the Palestinian law is so corrupt,” said Graham, citing data unearthed by Gerber detailing how financial incentives to “martyrs” vary, based on the nature of the attack and if the assailant dies or not in the act. “It is a sick system. It needs to change,” Graham said.

Gerber showed the PA’s laws to Rep. Ed Royce (R-Calif.) and Graham early in 2017. Graham immediately reintroduced legislation to cut U.S. funding to the Palestinian Authority until it ceased incentivizing terror; it was first introduced in the House in February. Philanthropist Haim Saban and Sen. Bob Corker (R.-Tenn.) were “instrumental” is gaining bipartisan support for the bill, said Gerber.

“Any resistance to the bill came from people who, like me, had been uninformed,” he told The Jewish Week.

“Sander Gerber brought me this issue, explaining to me the Palestinian law is so corrupt,” said Sen. Graham.

The legislation then began to pick up steam in the media, with op-eds popping up in The Washington Post, The Wall Street Journal and The New York Times in fast succession. Indignation dripped from the pages of the go-to conservative outlets — the National Review, Commentary Magazine and Hudson Institute. Lobbyists rushed to pressure their local representatives to protest the status quo.

(The Jewish Week posted an op-ed by Israeli Ambassador to the U.N. Danny Danon on the subject, and it appears on page 29 in this issue.)

Last month, President Trump said he supports the ‘high level goals’ of the Taylor Force Act and is ‘closely monitoring’ developments with the legislation.

Gerber’s level of influence in Washington is highly uncommon for an outsider, according to several Washington-based observers.

Gerber’s level of influence in Washington is highly uncommon for an outsider, according to several Washington-based observers.

“This was the first time I ever heard of him,” said Thane Rosenbaum, director of the Forum on Law, Culture & Society, hosted by NYU Law School, where he is a distinguished fellow. He was inspired by Gerber to write an op-ed on the Taylor Force Act for the Washington Post, published in April. “He was fixated on the Taylor Force Act and he reached out to me to see whether I would agree to write about it.”

A Washington insider, who requested to speak off the record for political reasons, said it was “very unusual” that a political outsider like Gerber was able to bring the legislation to prominence. “Without Sander Gerber, this wouldn’t have happened,” said the insider, who added that Gerber stepped down from the AIPAC national board because of its hesitancy to support the legislation due to security concerns. The pro-Israel lobby did come around, urging members of the Senate Foreign Relations Committee to vote “yes” 24 hours before the vote took place.

“Sander was really the key figure in all of this,” said Noah Pollak, a political consultant who worked closely with Gerber to help bring the bill to national prominence. “He was the one who was willing to make this a relentless focus. He was right, and it worked.”

Pollak attributed the bill’s rapid ascent to the newly sympathetic Trump administration, asserting that “for eight years, this issue couldn’t be addressed.” The legislation is heading to the Senate floor soon, only a few months after the effort began.

David Halperin, executive director of the Israel Policy Forum, a nonpartisan group that supports a two-state solution to the Israeli-Palestinian conflict, said enacting this legislation now was “like pushing an open door.”

“The [PA’s] policy itself is indefensible,” said Halperin. “We have a president who is establishing his relationship with the State of Israel after a rocky period with the previous administration and looking for ways to demonstrate solidarity and support.”

“We have a president who is establishing his relationship with the State of Israel after a rocky period with the previous administration.”

According to the PA Finance Ministry’s 2017 budget, published on its website in July, salaries to incarcerated and released Palestinian prisoners — some of whom are convicted terrorists — will amount to NIS 552 million ($153.4 million) in 2017 — an increase of 13 percent since 2016, according to the report published by the Jerusalem Center for Public Affairs.

The Israeli government initially withheld support for bill, fearing it could negatively impact the security cooperation between Israel and the PA’s security forces, according to a Washington source. A PA economic collapse would have severe consequences for both Palestinians and Israelis. The revisions are aimed to address these concerns.

Jewish organizations across the spectrum, including those originally uninterested in pursuing the matter, have expressed support for the bill.

Correction: A previous version of this article said Gerber goes by “Sandy.” This is not the case. We regret the error.