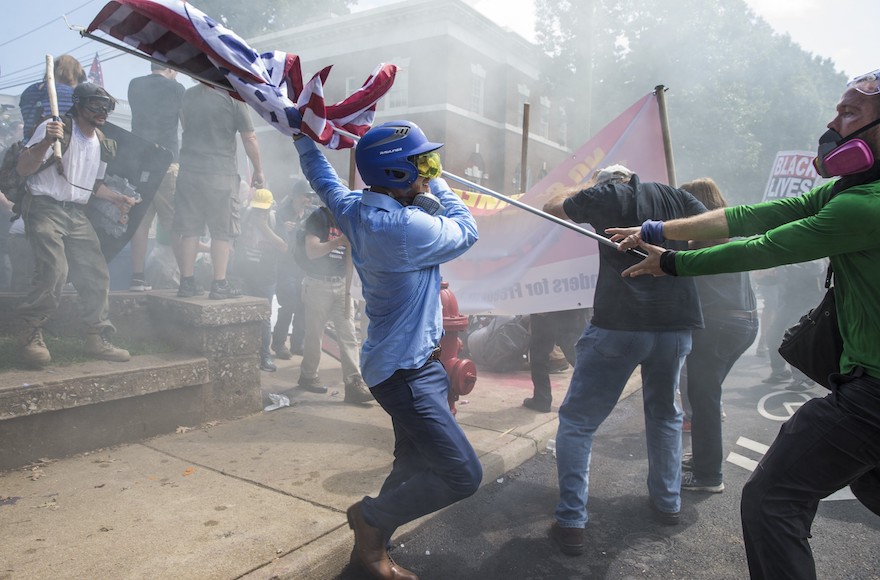 (JTA) — Jewish groups and Jewish leaders condemned the violence at a white supremacist event in Charlottesville, Virginia, and criticized President Donald Trump for saying that the hatred and violence came from “many sides.”

“The vile presence and rhetoric of the neo-Nazis who marched this weekend in Charlottesville is a reminder of the ever-present need for people of good will to stand strong, to speak loudly against hate, and act both to delegitimize those who spread such messages and to mitigate the harm done to the commonweal of our nation and to those that are the targets of hate messages,” Rabbi Rick Jacobs, president of the Union for Reform Judaism, said in statement issued on Saturday evening, adding that “once again, hate has killed.

Three people were killed as a result of the weekend neo-Nazi event. One woman was killed and 19 injured, some seriously, after a car driven by an Ohio man slammed into a crowd of counterprotesters. The driver, identified as James Alex Fields Jr., 20, of Maumee, Ohio, was taken into police custody and the incident is under investigation.

Two Virginia state troopers were killed when their police helicopter crashed and caught on fire while responding to clashes between white supremacist protestors and counterprotesters.

“We commend the opening of President Trump’s statement condemning the “egregious display of hatred, bigotry and violence” but are deeply troubled by the moral equivalence evident in President Trump’s statement today. White supremacists wielding Nazi flags and spewing racist vitriol need to be specifically condemned, not only violence and hate ‘on many sides.’ If our leaders can’t call out this virulent strand of hate we will surely fail to stop it,” Jacobs also said in his statement.

Trump held a news conference from his summer vacation in Bedminster, New Jersey, after posting tweets criticizing the violence in Charlottesville, including one which read “We ALL must be united & condemn all that hate stands for. There is no place for this kind of violence in America. Lets come together as one!”

“What is vital now is a swift restoration of law and order and the protection of innocent lives. No citizen should ever fear for their safety and security in our society,” he also tweeted.

We ALL must be united & condemn all that hate stands for. There is no place for this kind of violence in America. Lets come together as one!

Ronald Lauder, president of the World Jewish Congress, condemned the “inconceivable violence” on display in Charlottesville.

““It is utterly distressing and repugnant that such hatred and bigotry still run rampant in parts of this country. There is no place in our democratic society for such violence and intolerance. We must be vigilant and united in our opposition to such abhorrence,” he said in a statement.

Anti-Defamation League CEO Jonathan Greenblatt condemned the violence in Charlottesville in a tweet posted Saturday afternoon. “Mayhem in #charlottesville. We pray for victims of #violence & condemn those who marched thru streets chanting #hate,” he tweeted.

He also praised Trump for condemning the violence but criticized him for not specifically condemning the white supremacist movement. “Glad @POTUS blasted violence but long overdue for moral ldrshp that condemns the agents of #hate: #WhiteSupremacists, #NeoNazis, #AltRight,” he tweeted.

Mayhem in #charlottesville. We pray for victims of #violence & condemn those who marched thru streets chanting #hate https://t.co/dzrwg0dzsC

In a statement later issued by ADL, Greenblatt said: “This is a moment that demands moral leadership. President Trump should acknowledge that this is not a matter of equivalence between two sides with similar gripes. There is no rationalizing white supremacy and no room for this vile bigotry. It is un-American and it needs to be condemned without hesitation.”

“We call on the White House to terminate all staff with any ties to these extremists. There is no rationale for employing people who excuse hateful rhetoric and ugly incitement. They do not serve the values embodied in our Constitution nor the interests of the American people,” he also said.

The organization also called on Trump to find “moral clarity.”

Israel’s Minister of Diaspora Affairs, and Security Cabinet member Naftali Bennett, who is head of the right-wing Jewish Home party, condemned the rally and called on U.S. leaders to denounce the anti-Semitism connected to it.

“The unhindered waving of Nazi flags and symbols in the U.S. is not only offensive towards the Jewish community and other minorities, it also disrespects the millions of American soldiers who sacrificed their lives in order to protect the U.S. and entire world from the Nazis,” he said in a statement, adding: “The leaders of the U.S. must condemn and denounce the displays of anti-Semitism seen over the past few days.”

Sen. Bernie Sanders, I-Vt., in a tweet slammed Trump for his handling of Charlottesville.

“No, Mr. President. This is a provocative effort by Neo-Nazis to foment racism and hatred and create violence. Call it out for what it is,” said Sanders, a former Democratic presidential candidate.

No, Mr. President. This is a provocative effort by Neo-Nazis to foment racism and hatred and create violence. Call it out for what it is. https://t.co/WibPqkLsLa

Former Ku Klux Klan leader David Duke, who ran for and lost his bid for a Senate seat in Louisiana, and was an early and vocal supporter of Trump’s presidential run, tweeted in response to Trump’s call for all Americans to unite against hate.

“I would recommend you take a good look in the mirror & remember it was White Americans who put you in the presidency, not radical leftists,” Duke tweeted.

I would recommend you take a good look in the mirror & remember it was White Americans who put you in the presidency, not radical leftists. https://t.co/Rkfs7O2Ykr