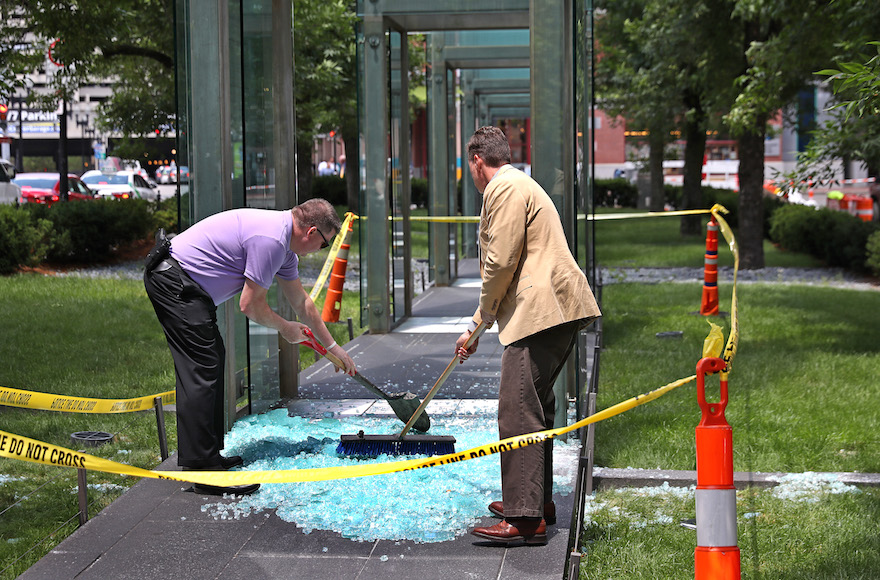 BOSTON (JTA) – A pane of glass was shattered Monday evening at the New England Holocaust Memorial, the second time in less than two months the Boston memorial was vandalized.

A 17-year-old male suspected of the vandalism is in custody, a spokesman for the Boston Police Department told JTA. Two passers-by tackled the  suspect and held him until police arrived, according to the Boston Globe, which reported that the police are investigating whether it was a hate crime.

A visitor to the memorial, which is located along Boston’s historic Freedom Trail, told the Globe he heard the sound of glass shattering as he was reading panels at the memorial and later saw police make an arrest.

“It’s a reminder that we as a community need to be united, both in our opposition to all forms of hate, but also in the important role that memorials play in our community,” Robert Trestan, the region’s director of the Anti-Defamation League, told the Globe.

Trestan said it was a second blow to the community.

“It comes at a time when most of Boston is standing in solidarity [against] the hatred that we saw in Charlottesville over the weekend,” he said.

The Jewish Community Relations Council of Greater Boston published a joint statement with Combined Jewish Philanthropies linking the vandalism to the deadly violence at the white supremacist rally in Charlottesville, Virginia, over the weekend.

“We are appalled and saddened that the New England Holocaust Memorial was vandalized Monday night for the second time in just 6 weeks,” the statement said. “The images of Nazis marching in the streets of America over the weekend in Charlottesville and now shattered glass once again at this sacred space in Boston are an affront to our Jewish community and to all those who stand up against bigotry, hatred and anti-Semitism.

“We thank the Boston Police and the Public Works Department for their rapid response and for their continuing support during this difficult time. We will remain resilient and will have a timeline for rebuilding the memorial once we have assessed the damage.”

“I’m saddened to see such a despicable action in this great city,” he said.

The 22-year-old memorial was recently repaired and rededicated following the earlier vandalism in which one pane of glass was shattered, the first time it was struck by vandalism, allegedly by a 21-year-old man with a history of mental illness.  The six-towered memorial, designed by architect Stanley Saitowitz, features 132 panels of glass etched with seven-digit numbers symbolizing the numbers tattooed on the arms of Jews during the Holocaust.

“The horrible suffering that we, the survivors, endured in concentration camps cannot be forgotten. When we repeatedly say ‘remember,’ we turn first of all to the world around us,” Arbeiter said at the ceremony, which was attended by Walsh and Massachusetts Gov. Charlie Baker, as well as leaders of the Jewish community and other faith and civic groups.