Closing A Chapter On ‘Open Orthodoxy’ 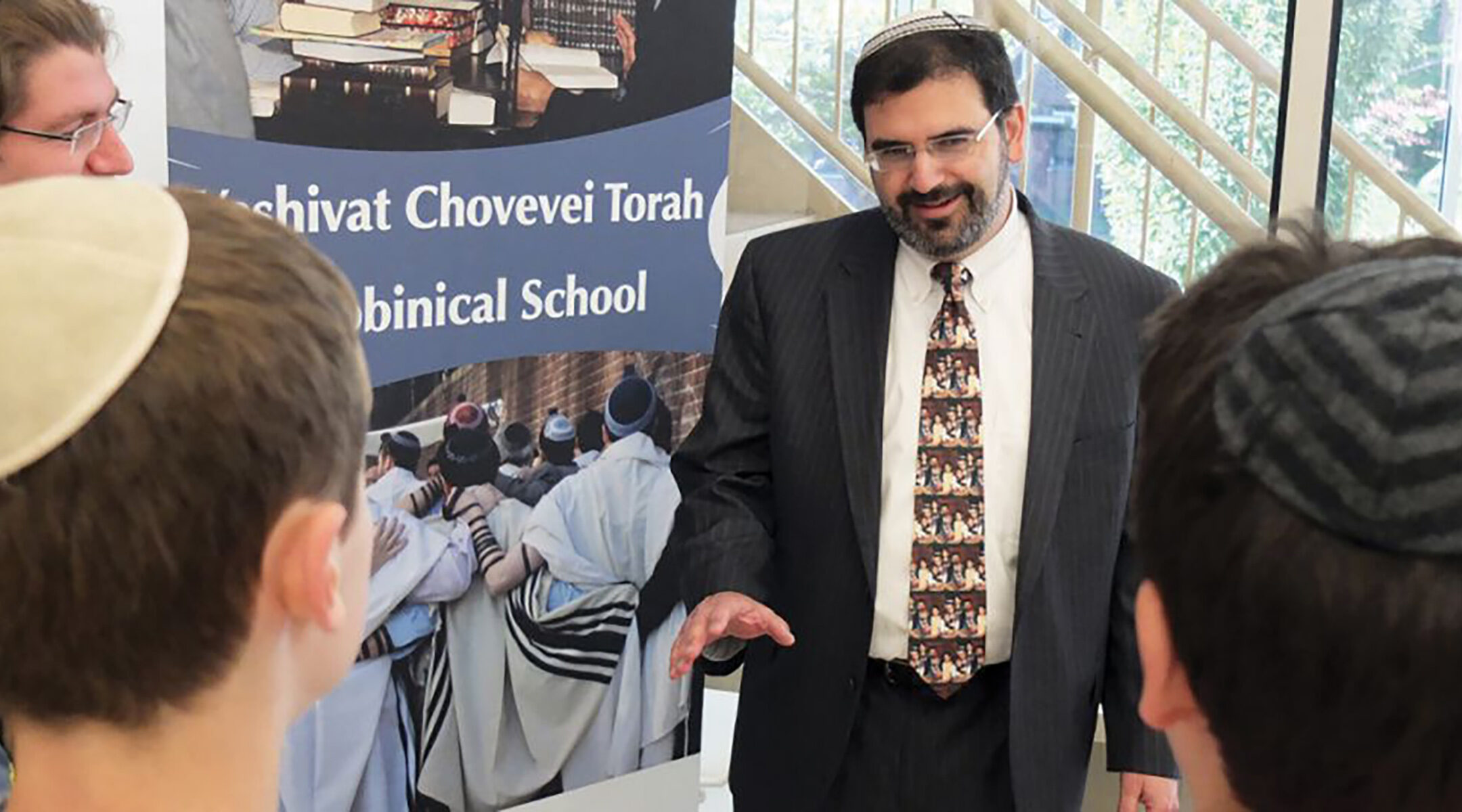 Nearly 20 years ago, as Modern Orthodoxy was continuing its rightward march, a pioneering seminary opened in Riverdale. Yeshivat Chovevei Torah (YCT), founded by the Soviet Jewry activist and maverick Rabbi Avi Weiss, would offer a more liberal option for men pursuing rabbinic ordination. Describing itself as more inclusive and open-minded than the prevailing norms, the fledgling seminary was a tangible symbol of the split that was opening up in the Modern Orthodox community.

And it had a name for its brand: Open Orthodoxy.

Now, in what appears to be a rebranding — or de-branding — effort, the leadership of YCT is distancing itself from the term “Open Orthodoxy.”

“We want to focus on the important work we are doing in the Orthodox community and beyond … rather than focus on a label that … has become a distraction,” said Rabbi Asher Lopatin, who succeeded Rabbi Weiss as YCT president in 2013.

On July 26, The New Jersey Jewish News (The Jewish Week’s sister publication) received an email from YCT that read, in part: “We have been referred to as an ‘Open Orthodox Seminary’ by your newspaper, which is incorrect. ‘Open Orthodox’ is not a term that we use to describe ourselves, nor is it part of any language on our site, mission, marketing materials, etc.”

That message indicates a marked change for a school established in 1999 to embody the philosophy of Open Orthodoxy, which Rabbi Weiss has described as “expressing vibrancy, inclusivity and non-judgmentalism.” In particular, he has written that the “key issue today is inclusivity” — for women’s ritual roles in the synagogue, accepting LGBTQ members as full participants of the community, reducing stringent rules for conversion and encouraging dialogue with other denominations and faiths.

The YCT website incorporated the language of “Open Orthodoxy” in its mission statement from its inception, and for several years, it carried the tagline “Where open Orthodoxy begins.”

But that language is gone.

At issue is more than terminology. It’s about a political and ideological struggle within Orthodoxy, with YCT seeking to bolster its standing as part of that movement, albeit on its left wing, countering critics who say it is beyond the bounds of halacha, or Jewish law.

At issue is more than terminology. It’s about a political and ideological struggle within Orthodoxy.

The stakes are high for YCT, which has had an uphill battle in placing its rabbis in mainstream Modern Orthodox pulpits. Yeshiva University, the well-established far larger and more venerable institution, sponsors the primary Orthodox rabbinical school in the field. YCT’s decision to drop the “Open Orthodox” phrase appears to signal a renewed bid to become more acceptable within the movement. As 2017 YCT graduate Rabbi Daniel Geretz, who leads Ma’ayan, a partnership minyan in West Orange, N.J., put it, “The context might be about who has the ‘right’ to speak for Modern Orthodoxy.”

Rabbi Lopatin’s preferred wording reflects that reality. “The term ‘Modern Orthodox’ has developed into a nice, inclusive term in the Orthodox world,” he said.

Rabbi Weiss says he continues to use Modern Orthodox and Open Orthodox interchangeably, noting “we are all talking about the same thing, and what matters is the holy work we are doing.” His latest book, due out in a few months, is entitled “Journey To Open Orthodoxy.” But Rabbi Lopatin has taken to correcting the language of supporters, even in conversation. “When they say, ‘Open Orthodox,’ I say, ‘We are Modern Orthodox. We are a full part of Modern Orthodoxy,’” he said.

“We are all talking about the same thing…. What matters is the holy work we are doing.”

Steven Bayme, national director of contemporary Jewish life for the American Jewish Committee, observed that Rabbi Weiss uses “open” to highlight “being open to a range of viewpoints and to all Jews,” but not necessarily to create a new movement. Bayme said there is a wide range of ideological positions among YCT students. He personally prefers the term “Modern Orthodox” because “it suggests synthesis and is “value-based,” while he believes “Open Orthodox sounds utilitarian.”

Rabbi Steven Exler, a YCT graduate, is senior rabbi at the Hebrew Institute of Riverdale (HIR), which Rabbi Weiss led for more than four decades. Rabbi Exler said he often uses “the word ‘open,’ lower case” in describing the synagogue as welcoming. It is known for its outreach and pioneering efforts on behalf of women clergy.

The terminology debate “doesn’t keep me up at night,” the rabbi said. “Our shul never felt a need to prove [anything] to anyone else. What matters, whether the label remains or not, is that we continue our mission, and that everyone recognizes we are part of the Orthodox community. We don’t want to give others ammunition to write us out [of Orthodoxy]; we want to stay in.”

Rabba Sara Hurwitz, dean of Yeshivat Maharat, also sought to play down the issue. She said the women’s seminary established in 2009 by Rabbi Weiss sees itself as a “big tent” institution, attracting women from across the Orthodox spectrum. “Our values are clearly associated with both Modern Orthodoxy and Open Orthodoxy,” she said, “and we are reflective of the entire Orthodox community at large.”

Yeshivat Maharat used the language of Open Orthodoxy on its website from 2009 until 2012, though to a much lesser extent than YCT, but no longer does.

“Words have come and gone,” Rabba Hurwitz said. “We use them as descriptions of our values and those are values we are proud of.”

(It should be noted that while Yeshiva University is often cited as the educational and spiritual core of Modern Orthodoxy, it has not used the term since Dr. Norman Lamm chose “Centrist Orthodox” to describe the school more than four decades ago, as its president. YU is widely seen as having moved further right in recent years.)

As a YCT student, Rabbi Menashe East, who was ordained in 2003 and leads the Mount Freedom Jewish Center in Randolph, N.J., found Rabbi Weiss’s approach — focusing less on tightening religious boundaries and more on welcoming worshippers — “deeply inspiring.” Rabbi East called that method an antidote to the “closed, insular, afraid-of-questions, dogmatic” form of Orthodoxy he describes as “condescending to the non-Orthodox and resentful of the non-Jew,” a form that has replaced the Modern Orthodoxy of his childhood.

He said YCT was created in part as an effort to instill “values meant to help recover and redeem a Modern Orthodoxy that had lost touch with these core attitudes.”

The reason the phrase “Open Orthodoxy” disappeared from the YCT website and mission statement at the end of 2015 may well be connected to the stepped-up criticism the seminary was receiving from the Orthodox right that year.

That was when the charedi Agudath Israel of America targeted Rabbi Weiss and his institution, calling Open Orthodox ideas “heretical.” It was also the year the mainstream Orthodox Rabbinical Council of America, which bars YCT graduates from membership, barred the ordination of women and prohibited its synagogues from hiring women with the title Maharat, used by Yeshivat Maharat, the seminary for women Rabbi Weiss founded.

In 2016, The Jewish Press, a voice of the Orthodox community, condemned the school, suggesting that “Open Orthodoxy is “openly unorthodox,” asserting that the philosophy is for “heretics,” and calling it “a wolf in sheep’s clothing, appealing to unknowing Jewish communities that seek a meaningful and genuine Orthodox religious experience.”

That same year, 11 YCT graduates joined a petition distancing themselves from “partnership” minyanim, which embrace a liberal view of halacha and permit women to read Torah, receive aliyot, and lead certain parts of the Shabbat service.

This year, the Orthodox Union formally banned synagogues from hiring women clergy and is in the process of deciding what action, if any, to take against the handful of OU synagogues that engage women in rabbinic-like positions.

He and other proponents of the liberal approach point to successes in the last two decades with the creation of JOFA, the Jewish Orthodox Feminist Alliance, and the International Rabbinic Fellowship (a liberal response to the Rabbinical Council of America), in addition to the founding of YCT and Yeshivat Maharat. (Edah, a liberal Orthodox organization, closed in 2007; and the jury is still out on Porat, a national effort launched last year by Rabbi Weiss and others to revitalize Modern Orthodoxy around the country.)

Most observers view the last two decades as one of dramatic ascendancy in numbers and influence for the more fundamentalist, charedi elements of the Orthodox community. (According to a 2015 Pew Research Center study, 62 percent of Orthodox Jews are charedi.)

YCT officials point to its 120 rabbinic graduates as a sign of their acceptance in the Orthodox world. But only 20 are in OU-affiliated synagogue pulpit positions, including three at the Hebrew Institute of Riverdale, the congregation Rabbi Weiss led.

Many more have taken positions in Modern Orthodox and pluralistic day schools, or serve in chaplaincy or as Hillel directors on campus. At least one is in an OU-sponsored JLIC (Jewish Learning Initiative on Campus) position at a university. It is difficult to say whether the shift away from pulpit positions has been intentional or a necessity, given that many Orthodox synagogues feel pressured to hire YU graduates.

Sylvia Barack Fishman, a professor of Judaic studies at Brandeis University, noted that more than 90 percent of YCT graduates have jobs that utilize their rabbinic skills. She said that those who disparage YCT do so because they feel threatened.

Barack Fishman asserted that some Orthodox critics use the term “Open Orthodox derogatorily rather than descriptively, with the goal of delegitimizing Modern Orthodox leaders and lay people who support women’s leadership in public Judaism.” Such critics “are trying desperately to make Modern Orthodoxy into a closed club — and insisting that only they may define who belongs in that club,” she said.

Even as the intra-Orthodox debate goes on about terms, definitions and boundaries – who’s in and who’s out — there are those who call for greater unity.

Rabbi Daniel Geretz of the Ma’ayan doesn’t see the need to choose one brand of Orthodoxy over another.

“The challenges facing the Modern Orthodox Jewish community, and really the greater North American Jewish community — all the denominations — are so great that we really need to work together. … I don’t see that anyone who uses labels to set up a divisive atmosphere is really working to help resolve those challenges.”

Johanna Ginsberg is a staff writer at The New Jersey Jewish News. Jewish Week editor Gary Rosenblatt contributed to this report. Full disclosure: He is a member of the Hebrew Institute of Riverdale.