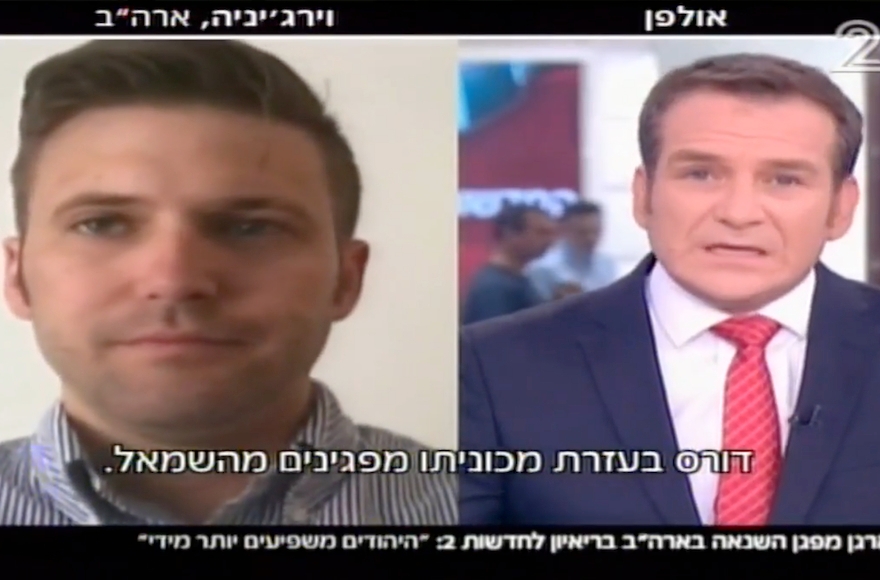 TEL AVIV (JTA) — White nationalist leader Richard Spencer told Israelis during an evening TV interview that they should respect him because he is essentially a “white Zionist.”

Spencer made the comment Wednesday on Channel 2 in response to a question about how he should feel about the anti-Semitism on display over the weekend at the violent white supremacist rally in Charlottesville, Virginia.

“As an Israeli citizen, someone who understands your identify, who has a sense of nationhood and peoplehood and the history and experience of the Jewish people, you should respect someone like me who has analogous feelings about whites,” Spencer told anchor Dany Cushmaro. “I mean, you could say that I’m a white Zionist in the sense that I care about my people. I want us to have a secure homeland that for us and ourselves just like you want a secure homeland in Israel.”

Cushmaro did not follow up on Spencer’s comparison, which is not uncommon in far-right circles, though it is widely rejected by Israelis and Israel supporters.

Earlier in the interview, Cushmaro pressed Spencer to explain why the far-right protestors’ chants of “Jews will not replace us” and other “anti-Jewish slogans” were not anti-Semitism. Spencer, a leader of the racist and anti-Semitic “alt-right” movement, justified the rhetoric, citing Americans’ right to free speech and Jews outsize role in left-wing American politics.

Asked how he would like to see President Donald Trump respond to Charlottesville, Spencer said he should investigate why the city’s mayor, Michael Signer, who is Jewish, and Virginia Gov. Terry McAuliffe “allowed chaos to reign.” He claimed that he and the other protesters were “peaceful.”

Spencer also said both the alt-right and Trump are “symptoms of a greater cause, and that is the demographic dispossession of white people in the United States and around the world.”

Far-right protesters converged on Charlottesville in defense of a statue of Confederate Gen. Robert E. Lee and brawled with counterprotesters. Some of the protesters carried Nazi and Confederate flags, gave Nazi salutes and expressed anti-Semitic and racists views.

After police broke up the the rally, a white supremacist, James Fields, rammed his car into a crowd of the counterprotesters, killing one woman and injuring at least 19. Two police officers also died when their helicopter crashed while monitoring the rally.

Spencer said it was not yet clear whether Fields had committed murder, but that he would “absolutely reject” his actions if they were proved to be “malicious” after a “fair trial.”

Trump said at a news conference Tuesday that not all the participants in the rally were white supremacists. Confronted about whether he was putting white supremacists and neo-Nazis on the same “moral plane” as the liberal and leftist counterprotestors, he said, “I’m not putting anybody on a moral plane.” Trump seemed to backtrack from his statement a day earlier condemning neo-Nazis and white supremacists for the violence.

Trump’s statements were widely criticized, including by Jewish and Israeli leaders and Republicans, but Spencer quickly tweeted praise, calling them “fair and down to earth.”

Trump's statement was fair and down to earth. #Charlottesville could have been peaceful, if police did its job. https://t.co/3FUgmWoiWi