Who are you calling a Nazi? 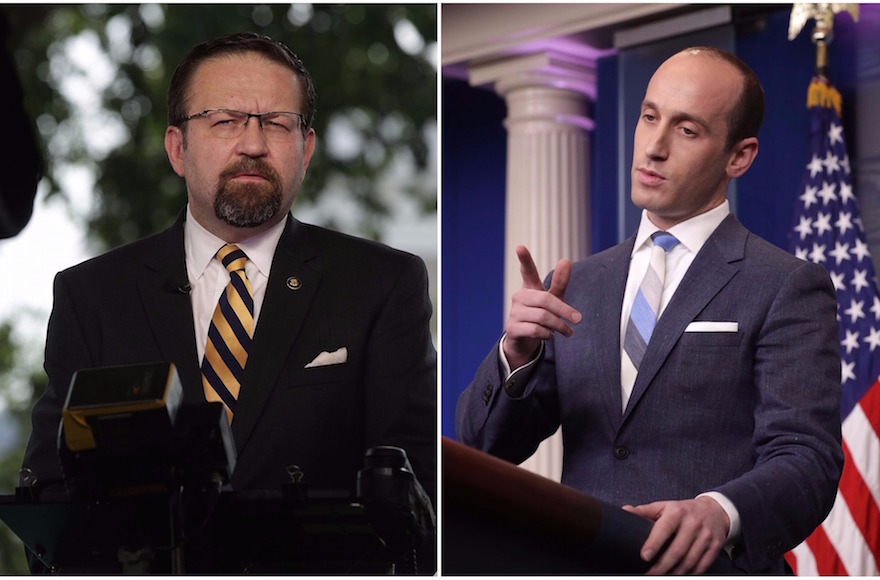 (JTA) — President Donald Trump and his top aides have been accused of indulging the nationalist far right and its various hangers-on, including the rogue’s gallery of white supremacists and neo-Nazis who marched on Charlottesville last weekend.

But does that make them Nazis?

Jewish groups usually steer clear of Holocaust comparisons and direct accusations of Nazism except where absolutely and specifically warranted. But earlier this week the progressive group Bend the Arc Jewish Action called on Congress to demand the firing of three administration aides and demanded a “Nazi-Free White House.” The subject line on the email I was sent from their publicist read “Fire the Nazis.”

The petition, which had nearly 8,500 signatures by Friday afternoon, calls for the ouster of Stephen Miller, a senior advisor for policy; Sebastian Gorka, a deputy assistant to the president; and, until Friday, Stephen Bannon, Trump’s chief strategist.

All three, says Bend the Arc, “espouse white nationalism in words and policy.”

“These three men, all members of President Trump’s inner circle, have championed the antisemitic, racist, neo-Nazi movement that chanted ‘Jews will not replace us,’ gave the Nazi salute, and stoked the deadly violence in Charlottesville this past weekend,” the petition reads, referring to the far-right rally in Virginia in which a 32-year-old counterprotester was killed.

“There are three things I would say,” Kimelman-Block said in an interview. “We have clear neo-Nazis in the streets saying Trump is their president. Sebastian Gorka is reportedly a lifelong member of the Hungarian fascist group Vitézi Rend that was aligned with the Nazis and he has pledged lifelong membership in that group. And just yesterday, Richard Spencer was asked and said that fellow travelers like Bannon and Miller are his people.”

The ideologies and biographies of all three men have been the subject of intense scrutiny, debate and speculation.

Kimelman-Block was referring to reports in the Forward that Gorka, a native of Britain who is the son of Hungarian immigrants, is a member of Historical Vitézi Rend, the namesake of a pro-Nazi order disbanded and outlawed following World War II. Gorka has denied being a fascist or anti-Semite, and said he never took an oath of loyalty to the Vitézi Rend.

In a news conference Tuesday, Spencer, a self-styled white nationalist and a leader of the “alt-right,” referred to Miller — who is Jewish — and Bannon as fellow travelers.

Miller, whose key issue in the White House has been tightening immigration, has strongly denied Spencer’s claims that he and Spencer were connected when they both attended Duke University. On Tuesday he told New York magazine, “As I have said on numerous occasions, I strongly condemn Spencer, his cohorts, and his views.”

Bannon, who describes himself as an “economic nationalist,” previously ran Breitbart News, which he once described as “the platform for the alt-right.” Bannon acknowledged this week that he welcomed Trump’s polarizing comments on the Charlottesville violence, saying that as long as the left is focused on race and identity, his side will “crush” the Democrats.

Bannon, however, also denies charges that he is racist or anti-Semitic, and on Wednesday said in the same interview with The American Prospect that he considered the far-right figures supporting Trump irrelevant.

“Ethno-nationalism — it’s losers. It’s a fringe element,” Bannon said. “I think the media plays it up too much, and we gotta help crush it, you know, uh, help crush it more.” He called the ethno-nationalists on the far right “clowns.”

Nevertheless, Kimelman-Block insisted the three White House advisers either espouse or promote white nationalism, and called them a “huge issue and problematic.”

But he said his group has been focused on Trump himself.

“We have been raising concerns that since launching his campaign, he has been playing the classic demagogue tool kit of scapegoating immigrants and minorities,” Kimelman-Block said. “What happened this past weekend was absolutely horrifying, and an outgrowth of the direction he has been taking the society with his rhetoric and actions.”

Still, Nazis? The deadly march in Charlottesville, with protesters chanting “Sieg Heil” and waving swastikas, showed that Hitler’s genocidal ideology still has eager adherents. Far-right groups in Europe seem more than happy to assume his mantle. And supporters of Trump peeled away this week over his failure to adequately denounce a march that was dominated not by, as he put it,  some “very fine people,” but by ghouls chanting “Jews will not replace us!” and “Blood and soil!”

But there’s also a threat that “Nazi” will lose its meaning if too broadly or indiscriminately applied — just as conservatives overdid it this week in referring to “terrorists” in the antifa and Black Lives Matter movements, or critics of the pro-Palestinian activist Linda Sarsour aren’t content to quote her harsh criticism of Israel, but rather label her a member of the Muslim Brotherhood or Hamas.

The inflation of political language, on all sides, might rally the troops, but it does little to clarify the situation it describes.