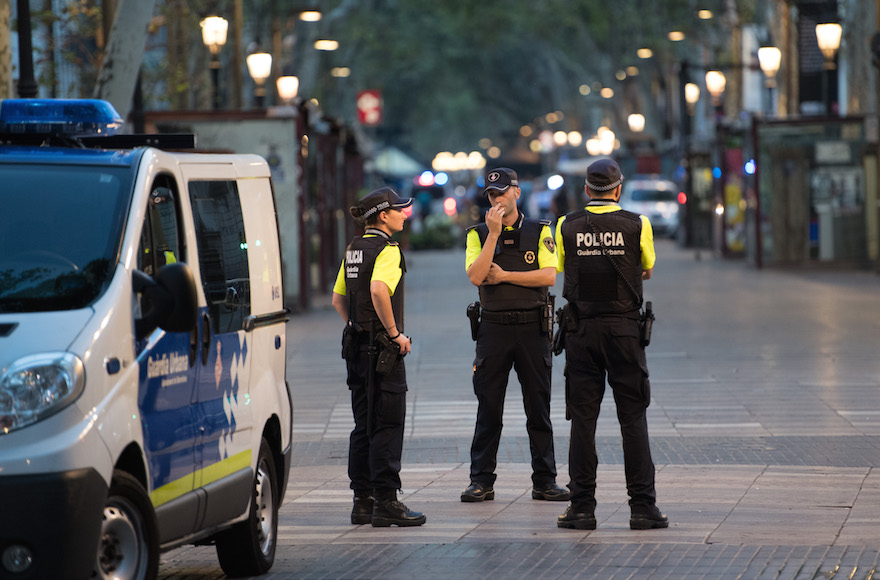 (JTA) — Commenting on deadly attacks in Catalonia, the chief rabbi of that region in Spain said his community is doomed, partly because of radical Islam and the alleged reluctance of authorities to confront it.

Rabbi Meir Bar-Hen has been encouraging his congregants to leave Spain, which he called during an interview with JTA a “hub of Islamist terror for all of Europe,” for years before the attacks Thursday and Friday, he said. At least 14 victims and five suspected terrorists were killed in Barcelona and the resort town of Cambrils, 75 miles south of that city.

To Bar-Hen, whose community on Friday resumed activities that it had suspended briefly following the Barcelona attack, “Jews are not here permanently,” he said of the city and region. “I tell my congregants: Don’t think we’re here for good. And I encourage them to buy property in Israel. This place is lost. Don’t repeat the mistake of Algerian Jews, of Venezuelan Jews. Better [get out] early than late.”

A white van on Thursday careered into crowds on Las Ramblas, Barcelona’s feted thoroughfare, when the street was packed with locals and tourists. Along with the fatalities, more than 100 were injured. The driver of the van fled on foot and was believed to be still at large on Friday. Police shot dead another man at a checkpoint Thursday. The Islamic State terrorist group claimed responsibility for that attack.

Hours later, police killed five men during a raid in Cambrils whom police said were terrorists planning an imminent attack.

Part of the problem exposed by the attacks, Bar-Hen said, is the presence of a large Muslim community with “radical fringes.” Once these people are “living among you,” he said of terrorists and their supporters, “it’s very difficult to get rid of them. They only get stronger.” He also said this applied to Europe as a whole.

Bar-Hen emphasized that he was speaking as a private person and not for all the members of his community.

Displaying a defiant and more confident attitude than Bar-Hen, the Federation of Jewish Communities of Spain issued a statement expressing “full confidence in security forces who work daily to prevent fanatics and radical Muslims from inflicting pain and chaos on our cities.”

Bar-Hen also charged that authorities and some politicians are reluctant to confront Islamist terrorism. He cited the government’s decision in April to allow Leila Khaled, a Palestinian terrorist who was convicted in a plot to hijack an airplane in 1969, to enter the country for a book festival. This showed authorities “do not understand the nature of terrorism, if they treat it as an action by the disenfranchised,” Bar-Hen said.

On Friday, Colau Ballano wrote on Facebook: “Barcelona is a city of peace. Terror will not make us stop being who we are: a brave city open to the world.” She urged readers to show up at a solidarity rally that day.

Angel Mas, founder of the ACOM pro-Israel group, which protested Khaled’s visit, said it is “pure cynicism” by Colau Ballano to claim to oppose terrorism in light of her support for Khaled “and other individuals that support terrorist causes,” as he phrased it.

Bar-Hen said he may not attend the rally called by Colau Ballano, as security officials instructed him to avoid public areas in the coming days because he is recognizably Jewish.