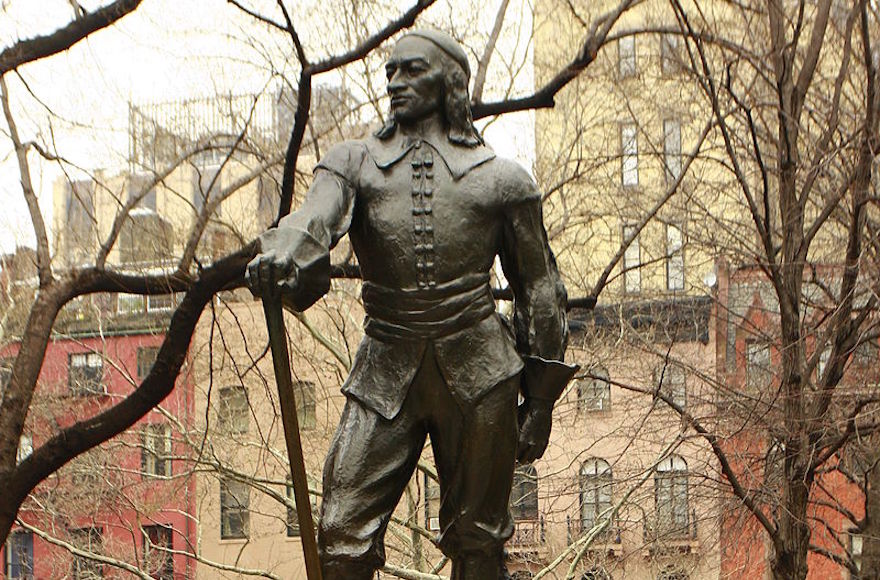 One of these things is not like the others.

Amid the impassioned debate over whether, when and how to remove statues memorializing the Confederacy, an Israeli nonprofit is seeking a piece of the action. On Tuesday, Shurat HaDin, which represents terror victims in court, called on New York City Mayor Bill de Blasio to remove all memorials to Stuyvesant, the last Dutch director-general of New Amsterdam (now New York), who was an anti-Semite.

“Peter Stuyvesant was an extreme racist who targeted Jews and other minorities including Catholics and energetically tried to prohibit them from settling in then New Amsterdam,” read a statement by Nitsana Darshan-Leitner, Shurat HaDin’s president. “New York, of all American cities, which boasts such important Jewish history and claims such a present day vibrant Jewish community, should take the lead in denouncing Stuyvesant’s bigotry.”

The group’s complaint would affect a range of locations and institutions around the city — from the elite Stuyvesant High School to Bedford-Stuyvesant, a Brooklyn neighborhood. The Dutchman also has a statue in Manhattan’s Stuyvesant Square.

It’s true that Stuyvesant hated the Jews — to put it lightly. He didn’t want them to stay in his colony when they arrived in 1654 from the Netherlands via Brazil. When that didn’t work (because — awkward! — some of the colony’s owners were Jewish), Stuyvesant settled for prohibiting them from building a synagogue and serving in the militia. And he slapped them with a special tax.

He also called them “the deceitful race, such hateful enemies and blasphemers of the name of Christ.” So, yeah, not a fan.

But does that put him on par with the leaders of the Confederacy?

Opponents of the statues of Lee, Davis and Jackson say they aren’t being taken down only because they were racist, though they certainly were. It’s because they led an armed rebellion against the United States so they could form a country built on the principle of enslaving an entire race.

If activists were calling for the removal of any monument to any racist (or anti-Semite), municipal workers would have their hands full taking down monuments to everyone from George Washington (he owned slaves) to Franklin Delano Roosevelt (who interned Japanese Americans en masse) to Edith Wharton (who has been described as “vehemently anti-Semitic, even by the standards of her milieu and her era”). Despite the protestations of President Donald Trump, no one is demanding these actions.

And in the generations following the Civil War, Lee and crew became symbols not just of military honor but of institutionalized racism. Most of the Confederate memorials went up during the imposition of Jim Crow and the resurgence of the Ku Klux Klan in the 1920s, and there was another burst of defiant statues during the civil rights era. The statues celebrated segregation, and worse.

“After the Civil War, these statues were a part of that terrorism as much as a burning cross on someone’s lawn,” said Mitch Landrieu, the mayor of New Orleans, in a speech in May. “They were erected purposefully to send a strong message to all who walked in their shadows about who was still in charge in this city.”

Darshan-Leitner said her group, given its focus on Jewish and Israeli issues, doesn’t take a position on whether to remove statues of racists. But she also pointed to those calls as the reason why Shurat HaDin’s demand to remove Stuyvesant’s monuments is coming now.

Though Stuyvesant institutionalized anti-Semitism for a brief period, his likeness isn’t viewed as a call to Jew- or Catholic-hatred. A statue of the peg-legged Stuyvesant, located in Manhattan’s Stuyvesant Park, was dedicated in 1941 to represent the “spirit of a great leader,” according to the New York City Parks Department. The inscription includes only his name, title and the years of his birth and death.

The Dutch government donated a bust of Stuyvesant to St. Mark’s Church in lower Manhattan in 1915 as a gesture of its friendship with the city. One of the speakers at the dedication, Maj. Gen. Leonard Wood, a war hero and prominent Republican Party leader, described how Stuyvesant was blamed for the English takeover of the Dutch colony and “was made the scapegoat of his superiors.”

Shurat HaDin is calling for all of Stuyvesant’s memorials to be renamed for Asser Levy, a prominent member of the first New York Jewish community who campaigned for equal rights. Levy already has two city parks, a school to his name — and he’s unlikely to get all of Stuyvesant’s real estate. Notably, Shearith Israel, the still-running congregation founded by the original New York Jews, has not joined Shurat HaDin’s campaign.