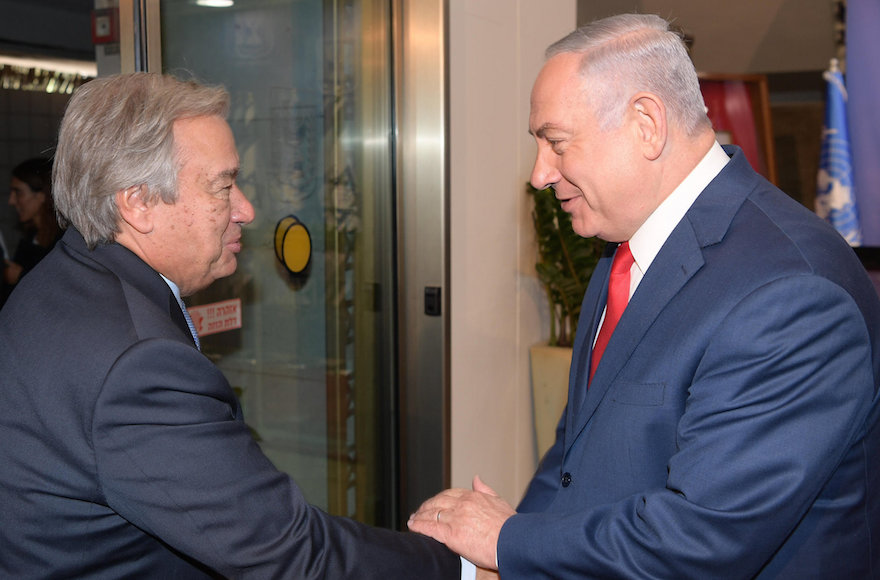 Iran is “building sites to produce precision-guided missiles towards that end in both Syria and in Lebanon. This is something Israel cannot accept. This is something the U.N. should not accept,” Netanyahu told Guterres Monday prior to their meeting in Jerusalem.

Netanyahu also told Guterres that the United Nations was failing to prevent Hezbollah from obtaining arms, a mandate that was part of the U.N. Security Council Resolution 1701 passed at the end of the Second Lebanon War in 2006. The prime minister charged that the United Nations Interim Force in Lebanon, or UNIFIL, has not reported one of the “tens of thousands of weapons smuggling into Lebanon for Hezbollah.”

Guterres, who is making his first visit to Israel and the Palestinian areas since becoming head of the United Nations in January, responded that he will “do everything in my capacity” to ensure UNIFIL fulfills its obligations.

“I understand the security concerns of Israel,” he said, “and I repeat that the idea or the intention or the will to destroy the State of Israel is something totally unacceptable from my perspective.”

Prior to meeting with Netanyahu, the secretary-general also met with Israeli President Reuven Rivlin at his residence in Jerusalem. Rivlin called on Guterres to work to end the discrimination against Israel in branches of the United Nations.

“This targeting of Israel, this singling out of the world’s only Jewish state — and even actions and statements that threaten to destroy Israel  are unacceptable and should come at a price,” he said.

Guterres in his appearance with Rivlin said that calls for the destruction of Israel are “a form of modern anti-Semitism,” then added, “but you also understand that I sometimes disagree with positions with the Government of Israel or any other government, and that is absolutely normal in a society where many of your citizens have exactly the same expressions of opinions.”

Guterres noted that he started his visit Monday morning at Yad Vashem, where he laid a wreath in the memorial hall.

“Yad Vashem is there to remind us that we need to be in the first line in fighting against anti-Semitism, but first of all fighting against all other forms of bigotry be it racism, xenophobia, even anti-Muslim hatred, to promote understanding and to promote dialogue, and I am very appreciative Mr. President for what has been your commitment to dialogue and understanding,” he said.

On Tuesday, the secretary-general is scheduled to meet with Palestinian Authority President Mahmoud Abbas. The following day he will tour Gaza.