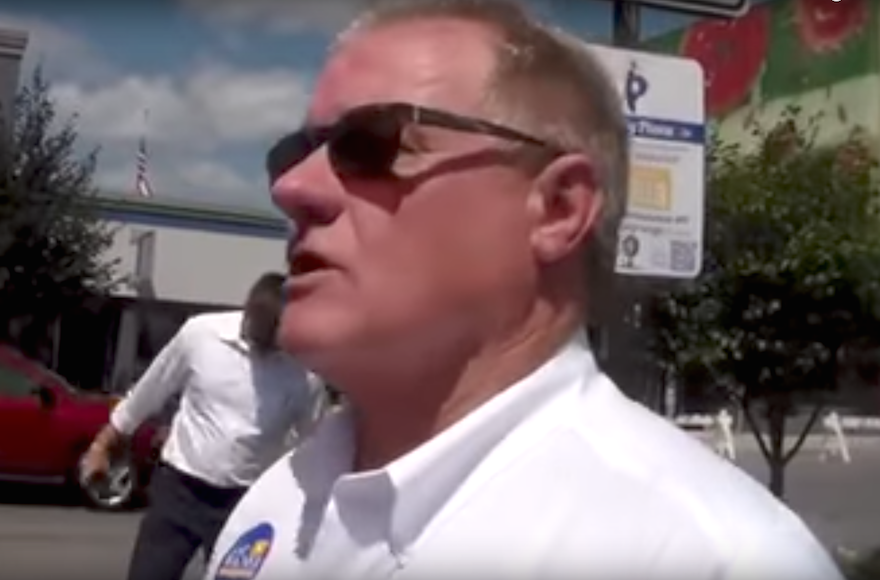 (JTA) — Three rabbis and three Christian clergymen have called on a Republican candidate for governor to apologize for making derogatory statements about billionaire businessman George Soros while noting he is a “Hungarian Jew.”

State Sen. Scott Wagner, appearing at a campaign event during the Pittstown Tomato Festival a day after the deadly Charlottesville rally confronted a tracker that he says works for Soros, a Democratic supporter.

The Allentown Morning Call reported that the tracker works for the Pennsylvania Democratic Party and is a regular at Wagner campaign events.

Wagner said on camera that it is great that America allows such trackers to follow him and went on to slam Soros, including accusing him of “hatred of America.”

“You know what’s amazing is that a guy who came from Hungary, a Hungarian Jew, and made a fortune, and think where he came from, and he has an opinion of America that he does,” said Wagner, a millionaire businessman working in waste management. “It’s just amazing to me.”

“Because of his ethnicity?” the tracker asks.

“No, because his hatred of America,” Wagner replies.

When the tracker asked Wagner why he mentioned that Soros is Jewish, the senator replied that “I have a lot of friends who are Jewish friends,” among them relatives of concentration camp survivors.

On Friday, Wagner told the Philadelphia Inquirer that he was trying to “bring a little humor” to the campaign.

He also offered his bona fides against the accusation that he is anti-Semitic, noting his involvement in and donations to a Jewish community center in York, Pennsylvania, according to the newspaper.

“This type of hateful behavior has no place in our political environment. We may have differences of opinion, different position on policy, and different ways at viewing the world. But there is absolutely no need to declare that people are un-American, especially because of another person’s religion or race,” the letter said.

“We are disturbed that you referred to these comments as your idea of ‘a little humor,’ and hope that you will clarify this characterization and illustrate that this incident does not reveal your true belief system.”