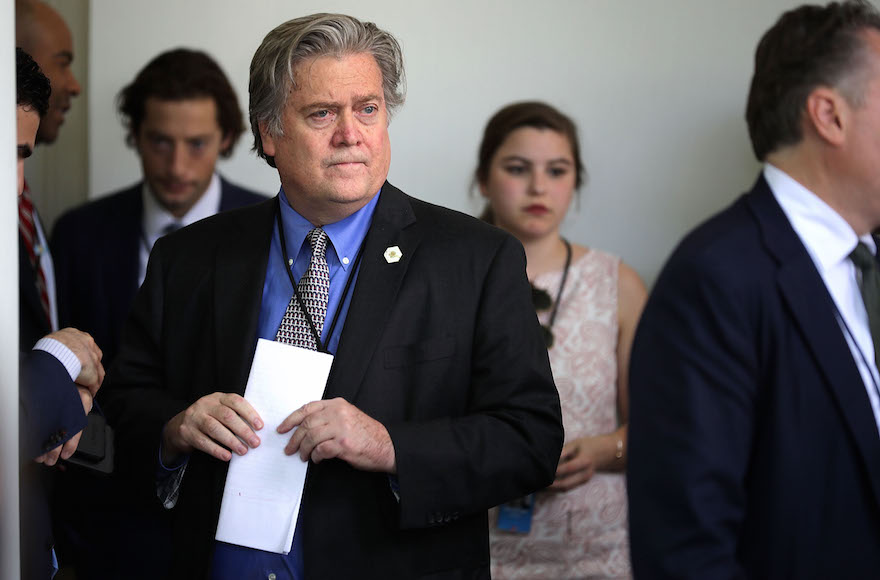 (JTA) — Stephen Bannon will speak at the Zionist Organization of America dinner in November in his first scheduled public appearance since he was fired from his post as chief strategist for President Donald Trump.

ZOA President Morton Klein confirmed to The Atlantic on Monday that Bannon will speak at the Justice Louis D. Brandeis Award Dinner on Nov. 12 at the Grand Hyatt in New York.

Among those to be honored that night, according to the ZOA website, are the U.S. ambassador to Israel, David Friedman, and former U.S. Sen. Joseph Lieberman of Connecticut. Billionaire philanthropist Sheldon Adelson and his wife, Miriam, are listed as presenters. Bannon may introduce Adelson, ZOA’s top donor, at the dinner, The Atlantic reported.

Bannon was scheduled to attend the ZOA gala last year but was a no-show.

He returned to his position as executive chairman of Breitbart News after leaving the White House earlier this month.

Bannon had been feuding for months with other members of the Trump administration, including senior adviser Jared Kushner and National Security Adviser H.R. McMaster.

ZOA in attempts to depose McMaster issued a report earlier this month alleging that he is anti-Israel. The report also charged that McMaster was undermining Trump’s Middle East agenda and the U.S.-Israel relationship by firing officials supportive of the Jewish state and critical of the Iran nuclear deal.

Bannon had been under fire since he began working for the Trump campaign last year. He was criticized for calling Breitbart a platform for the “alt-right,” a far-right and white nationalist movement that includes anti-Semitic figures and followers.

ZOA has consistently defended Bannon against charges, by the Anti-Defamation League and other groups, that the former White House strategist traffics in ideas that encourage the anti-Semitism on the alt-right. ZOA has praised Bannon and Breitbart for their “friendship and fair-mindedness towards Israel and the Jewish people.” It also praised Breitbart for articles reporting on anti-Israel incitement by the Palestinian Authority, violations of the nuclear arms deal by Iran and activity by the anti-Israel boycotts, divestment and sanctions movement.