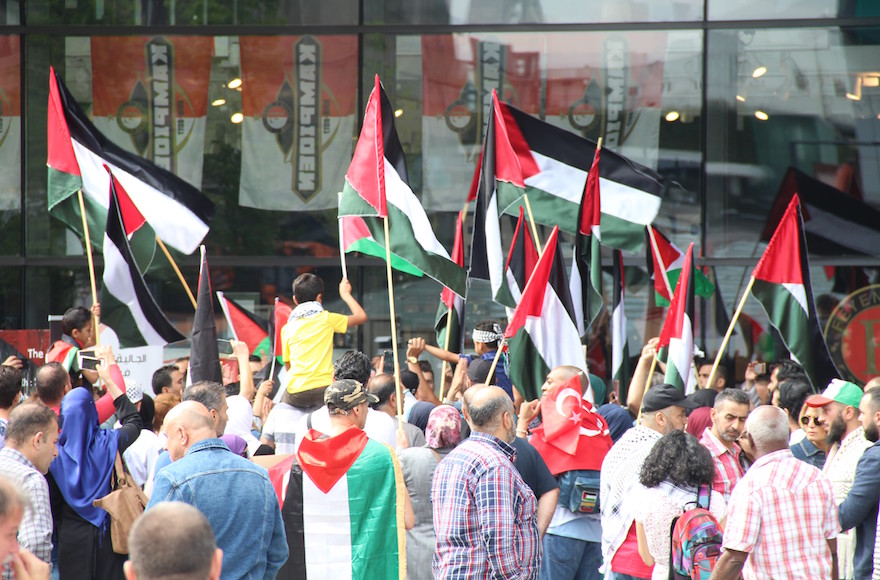 AMSTERDAM (JTA) — A Jewish umbrella group has filed a police complaint over demonstrators in Rotterdam shouting in Arabic about killing Jews.

The Dutch Central Jewish Board said in a statement Wednesday that the July 22 incident occurred at a rally advertised by a newly formed organization called the Palestinian Community in the Netherlands, or PGNL. The Rotterdam branch of the Boycott, Divestment and Sanctions movement, which also advertised the event on its Facebook page, was the real organizer of the rally, according to the statement.

A day earlier, BDS Rotterdam shared a call on Facebook to attend the rally by Amin Abou Rashed, a senior operative of the Al Aqsa Foundation, which the Dutch secret service and judiciary in 2003 flagged as a Hamas front and banned.

Participants in the rally, which was protesting the use of security measures by Israel around the Al-Aqsa mosque following a deadly terrorist attack there, shouted in Arabic, “Jews, remember Khaybar, the army of Muhammad is returning,” the statement said. The cry relates to an event in the seventh century when Muslims massacred and expelled Jews from the town of Khaybar, located in modern-day Saudi Arabia.

The Rotterdam rally, including the anti-Semitic chants, was broadcast live by the Shebab News Agency, an organization banned by the Palestinian Authority over its alleged ties to Hamas.

The Jewish board’s complaint with police was for racist incitement to violence, the statement read. Earlier this year, a Belgian court convicted a Palestinian who shouted the same words in 2014 in Antwerp.

BDS Rotterdam in a statement said the chants came from “one group of a coalition of several groups” that came together to protest against Israel, and that organizers “noted that the chants were not welcome.”

None of the participating groups, the BDS Rotterdam statement also said, “intended to call for violence or discrimination against Jewish people generally.”

Leefebaar Rotterdam, a right-wing faction on the Rotterdam City Council, asked last month in a query to the mayor to specify what measures will be taken against the people who shouted about Khaybar at the Rotterdam event. The municipality gave no concrete answers.

The Central Jewish Board wrote in its statement that the incident in Rotterdam underlines the need to formally apply in the Netherlands a definition of anti-Semitism that includes demonization of Israel – a move undertaken since last year by the United Kingdom, Austria, Romania, the European Parliament and the International Holocaust Remembrance Alliance, or IHRA.

Last week, Justice Minister Stef Blok wrote in replying to a parliamentary query on whether the Netherlands would adopt the definition that while it supported the definition’s adoption as a nonbinding working reference by IHRA, “currently the cabinet sees no added value in the adoption of a legally binding international definition because definitions have varying applications in different justice systems.”

The IHRA definition has prompted opposition by anti-Israel activists for its mentioning of vitriol against the Jewish state. The European Union’s agency for combating hate crimes in 2013 dropped its former working definition of anti-Semitism, which was similar to the one adopted by IHRA, amid pressure by Pro-Palestinian activists. A spokesman for the EU Fundamental Rights Agency agency told JTA that the EU neither needed nor had a real definition for the phenomenon.

The rally in Rotterdam is among “examples that demonstrate why the Central Jewish Board is a strong supporter of giving also in the Netherlands a juridical status to the definition,” the organization wrote. “We regret very much the outgoing cabinet’s announcement that it would not do this.”