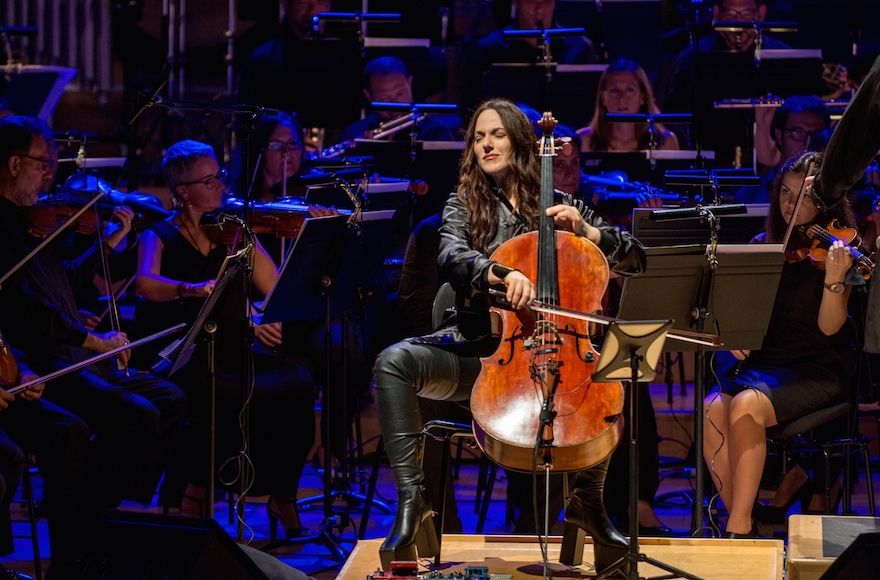 NEW YORK (JTA) — There’s a small music room in the basement of cellist Maya Beiser’s large, kempt house in the leafy Riverdale section of the Bronx. It’s pretty spare — a few cellos, some basic recording equipment and posters from past concerts.

Against one wall, though, rests a cherry red Gibson SG guitar, the kind made famous by AC/DC guitarist Angus Young. Beiser — a tall, auburn-haired and beautiful Israeli-American — smiles when asked about it.

“I play around with it sometimes,” she said.

She also owns several foot pedals, which alter and distort the sound of her cellos, but those are housed in a different space upstate, she explains.

Most cellists — most classical musicians, for that matter — don’t experiment with guitars and distortion pedals. But Beiser isn’t your typical cellist, even if she’s had a successful 30-year career playing classical music. She has performed solo at the world’s most prestigious venues and as a featured soloist on scores in some M. Night Shyamalan films.

On top of all that, she is known as one of the most inventive cello players in the avant-garde music world. Famed minimalist composer Steve Reich wrote his only solo cello piece specifically for her in 2003. In 2014, Beiser released an album of covers of classic rock songs by the likes of Jimi Hendrix, Led Zeppelin and Nirvana, all arranged for cello. She has collaborated multiple times with Philip Glass and Brian Eno. This year she has taken an orchestral arrangement of David Bowie’s final album, “Blackstar,” on tour in the U.S. and Europe.

Yet despite her accomplishments, as the 52-year-old Beiser prepares to release her 10th solo album early next year, she is not a household name like fellow Israeli virtuosos Itzhak Perlman or Pinchas Zukerman.

Asked if her decision to pursue experimental music is the reason, she gets a focused look in her eyes and immediately answers: “It is.” 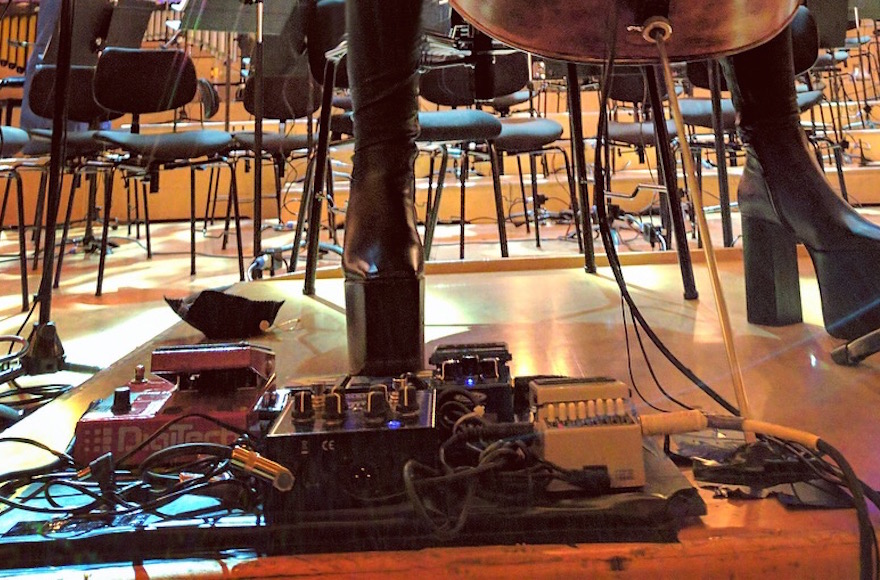 Beiser has been a self-described bucker of trends since her childhood in Gazit, an arts-focused kibbutz in Israel’s southern Galilee region. Locals suggested that she play the violin, as it was a common instrument in the community.

“Nobody played the cello,” she said. “The thing about the kibbutz is that you kind of had to do what everybody else does, and I was a rebel and I wanted to do my own thing.”

The renowned Jewish violinist Isaac Stern quickly discovered her during one of his trips to Israel through the America-Israel Cultural Foundation, which he founded. Stern, who mentored several Israeli musicians through the organization, wanted to bring her to the United States to ramp up her classical music studies, but Beiser’s mother wanted her to stay in Israel through the years when she would be required to serve in the army. (Her father pushed her from an early age to aim for Carnegie Hall; her mother was an advocate for a more “normal life.”)

Also, Beiser began to tire of classical training, which dictated how every single note of a piece of music should be played.

“I can go on Ableton Live [the music software platform] and make a really good cello that can play a lot faster than me and a lot more accurate than me. But who cares? It’s not interesting. What we love about art is the human expression, which always has imperfections in it.”

When Beiser was 15 — having not heard much else besides the classical music from her cello lessons and what was played in the kibbutz bubble — her boyfriend played her a Janis Joplin album. The Texas-born rock singer’s “raw expression,” as Beiser once put it, blew her mind.

Since then, Beiser says, she has tried to play cello the way Joplin sings.

“Classical training teaches you how to play … but what if I want to play it the complete opposite way?” she said. “At some point if you’re actually going to become an artist, as opposed to a student, then you have to start creating your own way.”

Beiser served in the Israeli military and studied music at Yale before moving to New York City. She became a key player in the creation of the contemporary avant-garde collective Bang on a Can along with founders Julia Wolfe, Michael Gordon and David Lang — who, she noted, are all observant Jews (as is Reich).

Although she is more spiritual than religious, Beiser says she is interested in Jewish tradition and its sense of morality. She draws inspiration from Abraham Joshua Heschel and says she often talks with Wolfe about “what it means to be Jewish today.” Wolfe wrote a piece titled “Emunah” — “faith” in Hebrew — for Beiser’s last album, “TranceClassical.” Lang’s opus “World to Come,” which he wrote for Beiser more than a decade ago, was inspired by the 9/11 attacks but is based on Judaism’s concept of the afterlife.

Israeli-Palestinian coexistence is another important topic for Beiser. For “TranceClassical” she commissioned a half-Palestinian, half-Egyptian Muslim to write a song inspired by Kol Nidre, the invocation chanted the night of Yom Kippur. She said the composer, Mohammed Fairouz, was “fascinated” with the idea.

Although she still considers Israel her homeland, Beiser says she now feels equally, if not more, tied to the U.S. She says she never set out to become an American — her goal was simply to leave the kibbutz, which despite all of its liberal principles felt small and restrictive. Once here, New York City was the place to be for an up-and-coming experimental musician.

“This is my home, New York is really where I belong,” she said. “New York is this incredible place that doesn’t really have a nationality. What I think drives all of us [in New York] and what connects all of us is the idea that we want to live creative lives.”

Of all of the memorable performances and projects thus far, the moment that stands out most distinctly for Beiser was her appearance at a TED talk conference in 2011. In between playing pieces by Reich and Lang, she spoke of the cello’s “endless possibilities.” Afterward, some of the influential audience members, such as Bill Gates and Al Gore, praised her performance.

“It felt like anything could happen,” she said. “Like yeah, I have the platform to speak and to communicate my art.”