This factory makes thousands of shofars each year 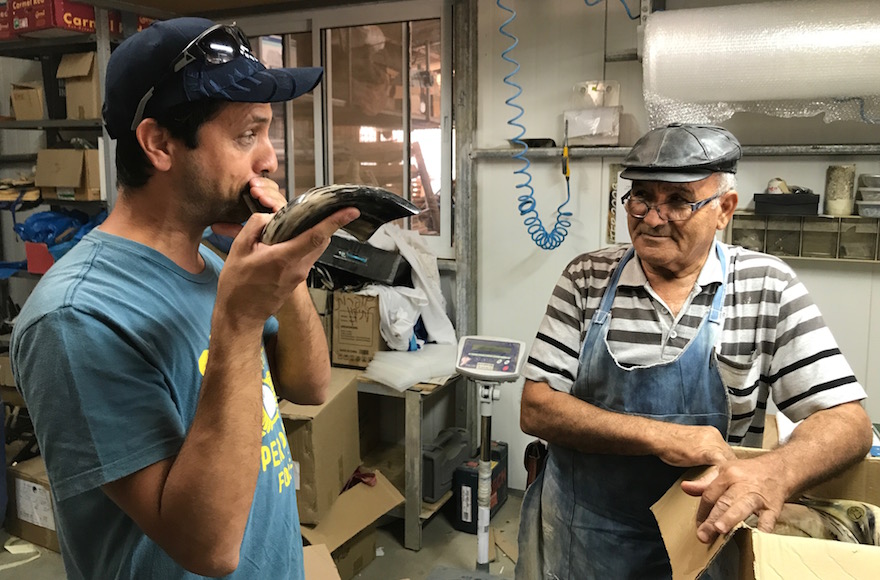 GIVAT YOAV, Golan Heights (JTA) – Shimon Keinan has a business to run. He doesn’t have time to teach you how to blow the shofar.

But if you come all the way to his Kol Shofar factory here, Keinan is going to make sure you walk away with the horn that’s right for you.

“What should I do?” he explained to JTA. “If someone is going to blow one of my shofars on Rosh Hashanah, I have to make sure he doesn’t fail.”

Even now, in the busy weeks ahead of the Jewish New Year, Keinan spends much of his day helping customers pick a shofar — and how to make it sound just right. It may not help his financial bottom line, but it keeps him attuned to a higher calling.

On a recent weekday morning, Keinan, 70, was reviewing shofar orders when a family of seven showed up. The husband, Dror Yoggev, took the day off from work and made the several-hour drive from central Israel to buy his first shofar.

“My father-in-law said not to go anywhere else,” he said.

Sorry, Keinan said, but he could not possibly find the time to help at the moment. Why didn’t Yoggev call ahead?

Yet minutes later Keinan, whose work uniform consists of a denim apron and a black leather cap, was rummaging through boxes of shofars in the back of the factory.

“According to your skin color, you probably want a Yemenite shofar,” Keinan said, offering Yoggev a spiraling, unpolished kudu horn, the type traditionally used by the Yemenite Jewish community. (A kudu is a type of African antelope.)

Yoggev explained that while his parents are from Yemen, he would be blowing the shofar at the Ashkenazi synagogue of his wife’s family and thus was looking for the kind of shiny ram’s horn preferred by European Jews.

“So yalla,” Keinan grunted, heaving a box of dozens of ram horn shofars onto the table in the storage room. “If it takes more than 15 minutes to pick one, you’re doing something wrong.”

Over the next couple of hours, Yoggev blew shofars while Keinan offered guidance and criticism: “Chin up. Chest out. Blow from the center of your mouth, not the side.”

In the end, Yoggev settled on a medium-sized ram horn with a small mouthpiece.

“It suits that strange game you play with your lips,” Keinan said. “Now I have to get back to work.”

For Keinan, running Kol Shofar is the fulfillment of a lifelong obsession. He likes to say he was born with a shofar in his hand. But in reality, his parents, who immigrated to Israel from Morocco in 1949, when Keinan was a baby, never had enough money to buy him one. He learned to blow the shofar as a child at his Orthodox synagogue in Tiberias, a small, working-class city on the Sea of Galilee, and he built his own out of a funnel and tubing. 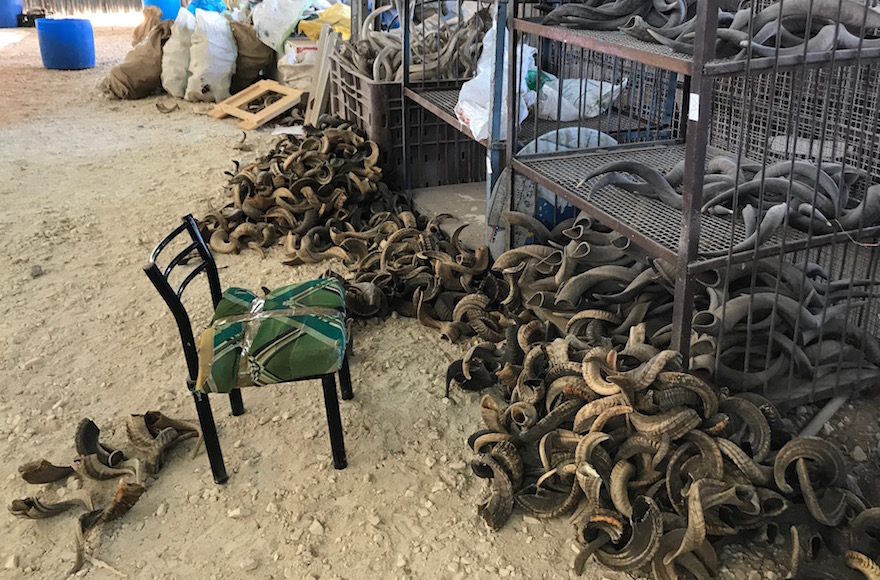 Some of the thousands of horns lying around the Kol Shofar factory in Givat Yoav, Golan Heights, Sept. 6, 2017. (Andrew Tobin)

Dropping out of school at 16, Keinan worked as a welder and was finally able to save enough money to buy a real shofar, which he blew every Rosh Hashanah at his synagogue as well as at the nearby Ashkenazi one. After marrying, he moved to Givat Yoav in the 1970s, where he built a metal workshop that doubled as a turkey farm and raised four children.

In the 1990s, Keinan got a chance to turn his passion into a profession when his rabbi introduced him to an elderly shofar maker in Jaffa who wanted to retire. For two years, Keinan drove to the man’s factory twice a week, more than two hours each way, to learn his techniques. In 1998, he turned the turkey farm into a shofar factory.

Today, Kol Shofar, which still looks a bit like a farm, with thin metal walls and concrete and dirt floors, is one of just two in Israel — the other being the much older Bareshet-Ribak Shofarot Israel, which has locations in Haifa and Tel Aviv.

Keinan said he sells about 7,000 shofars a year, at least 90 percent of them mail orders. Half are sold to Israelis, he said, while most of the rest go to Jews in the United States and Europe. Among his clients are famous Israeli rabbis, he said, including current Sephardi Chief Rabbi Yitzhak Yosef. The  months between Tisha b’Av and Sukkot are his busiest time of year.

According to Keinan, the hardest part of producing shofars is obtaining the raw materials. Every two or three years he travels to Africa to buy ram and ibex horns. He gets the ram horns — by far the most popular shofar material because of their recommendation by the Jewish sages – from his native Morocco, where millions of the animals are ritually slaughtered every year for the Muslim festival of Eid. 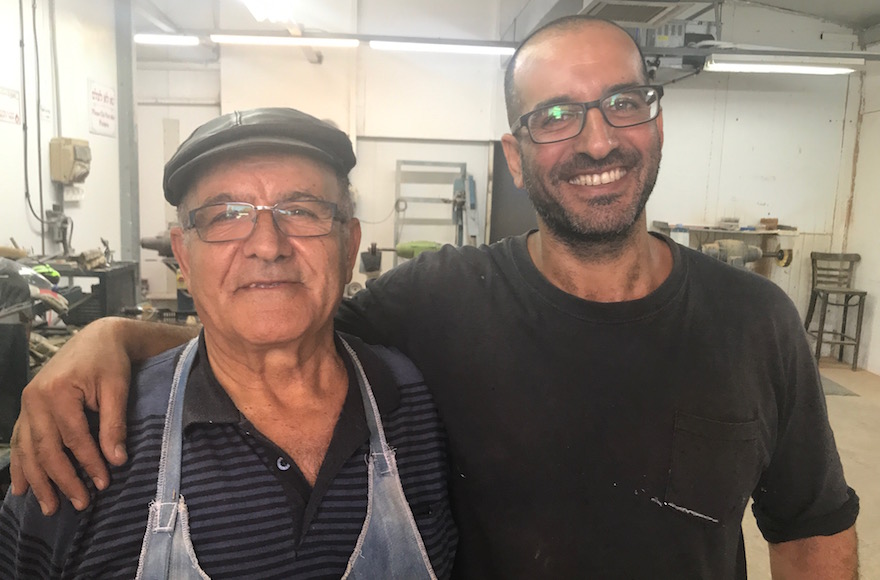 At the moment, the shofar factory is packed with thousands of horns. They fill boxes, shelves and shopping carts; some are heaped in huge piles on the floor. Keinan estimated that he has 20,000 ram horns, 2,000 kudu horns and a few ibex horns on hand. The ibex horns are rare because they come from Israel, where the wild goat is protected. An ibex horn shofar costs about $1,000, compared to about $100 for a ram horn.

Some 15 years ago, Keinan’s son, Hanan, 42, started accompanying his father on his Africa trips. Soon thereafter, he returned to Givat Yoav with his wife and children to join the family business full time. Along with his father, he handcrafts every shofar the factory produces. Three other employees help run the factory and the office.

While the younger Keinan acknowledged that he cannot match his father’s passion for shofars — and he’s also not religious, he added — Hanan has helped upgrade Kol Shofar’s production process with new techniques and machines.

Kol Shofar’s first two steps for producing shofars are family secrets, but they involve treating the horns to remove the gamey smell and applying heat to straighten them. After that, the narrow end of the horn is sawed off, a hole is drilled in the end and a special tool is used to expand the hole into a mouthpiece. The last step is buffing and shining the exterior.

Hanan Keinan has also pushed to expand the factory’s tourist business —  in recent years, he and his father paved the driveway and built a visitors center, parking area and restrooms. Some 7,000 people took tours of the factory last year, which at about $9 per person is a significant new revenue stream.

But while his son may have a head for business, Shimon remains the heart of the factory.

“He’s not afraid to give visitors a hard time, but when it comes to shofars, he has a serious desire to deliver knowledge and perfection,” Hanan Keinan said. “I think that is a big part of the reason our shofars are really the best.”