Family of Chabad emissary on St. Martin evacuated after weathering storm in mikveh 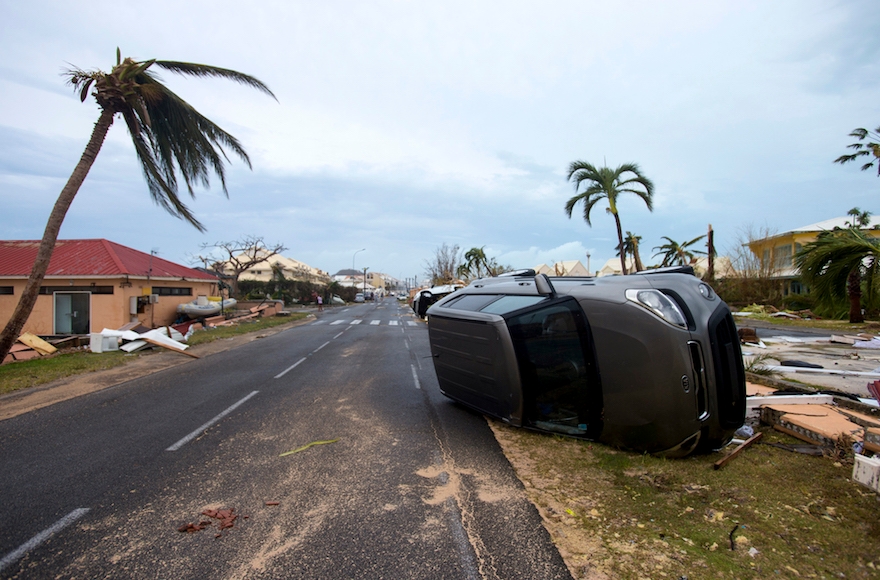 UPDATE: Due to inaccurate information supplied in a news release by ZAKA, the Israel-based rescue and recovery volunteer organization, an earlier version of this story indicated that the Chanowits family was evacuated from Saint Martin on the Sabbath by a private airplane carrying humanitarian cargo arranged by ZAKA. In fact, Sara Chanowits and her five children left the island for Puerto Rico on a U.S. military transport earlier on Friday. The story has been updated to reflect the new information.”

(JTA) — After remaining on the Caribbean island of Saint Martin and riding out the onset of Hurricane Irma in the Chabad House mikveh, the wife and children of the Chabad emissary were evacuated prior to Shabbat.

Rabbi Moishe Chanowits, his wife Sara and five children aged under 8, remained on the island to offer assistance to others when Hurricane Irma first hit early on Wednesday. However, as the winds picked up speed again before Shabbat, the family had difficulty finding a safe haven.

The Chabad House where the family had sheltered earlier in the week was under construction. It sustained damage in winds that reached 180 miles per hour.

Sara Chanowits and her five children left  for Puerto Rico on a U.S. military transport on Friday, according to Chabad officials. Moishe Chanowits remained on the island to assist others.

A group of Jewish tourists including medical students from the United States and Canada also were evacuated from the island.

Early Sunday morning the hurricane, measuring in at Category 4 with winds at nearly 130 miles per hour, was prepared to make landfall on the Florida Keys.