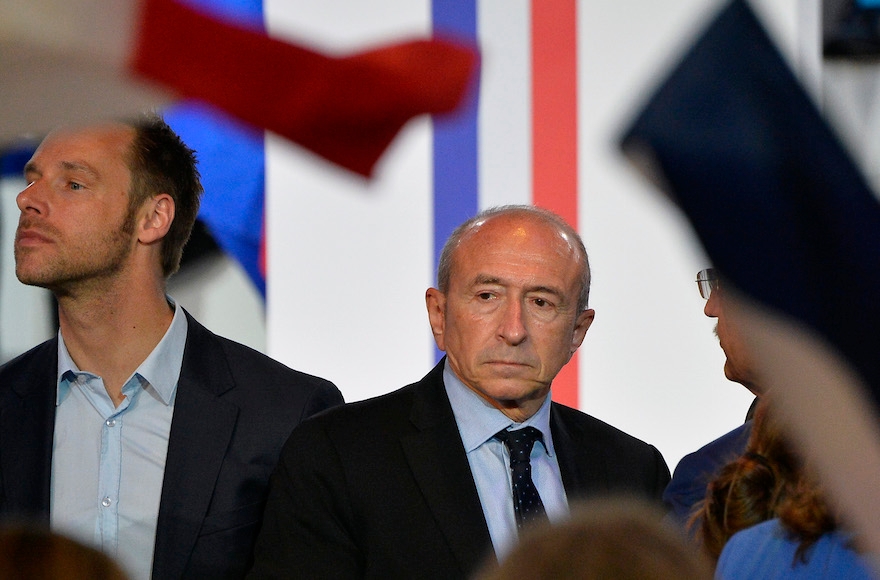 France’s Interior Minister Gerard Collomb, then the mayor of Lyon, at a rally at Grande Halle de La Villette in Paris, May 1, 2017. (Aurelien Meunier/Getty Images)
Advertisement

(JTA) — France’s Interior Minister Gerard Collomb condemned an anti-Semitic attack in which a French Jewish leader and his family were assaulted in their home.

The statement issued over the weekend by Collomb’s office reiterated the French government’s determination ‘’to do everything to combat every form of racism and anti-Semitism, which have no place in the French Republic.”

Collomb’s statement expressed his ‘’indignation’’ about the attack, which took place Thursday night, and ‘’according to the first elements, the motivation for this cowardly act seems to be directly related to the religion of the victim.”

“Everything will be done to identify and arrest those who carried out this foul attack,” the statement also said.

In the attack Thursday night, three men, two of whom were wearing masks, broke into the home of Roger Pinto, the president of Siona, a group that represents Sephardic Jews. The attackers beat Pinto’s son and wife in the home in the northeastern suburb of Livry Gargan, the Dreuz news website reported Sunday.

One of the attackers said: “You Jews have money,” according to the family members.

The Pintos were taken to hospital for treatment. They suffered some minor injuries and were deeply traumatized, the report said.

The incident, one of several cases in France in recent years in which criminals apparently singled out Jews based on the belief that they have money, provoked passionate condemnations from the CRIF umbrella group of French Jewish communities and the National Bureau of Vigilance Against Anti-Semitism. Both groups said the incident was an anti-Semitic attack.

The European Jewish Congress called on French authorities “to firmly root out societal anti-Semitism and its passive acceptance.”

“We appreciated the important words of the French Government in trying to make Jews feel safe in their country,” Dr. Moshe Kantor, president of the EJC, said in a statement. “However, it doesn’t appear that much has changed on the ground for French Jews who are still regularly attacked.”