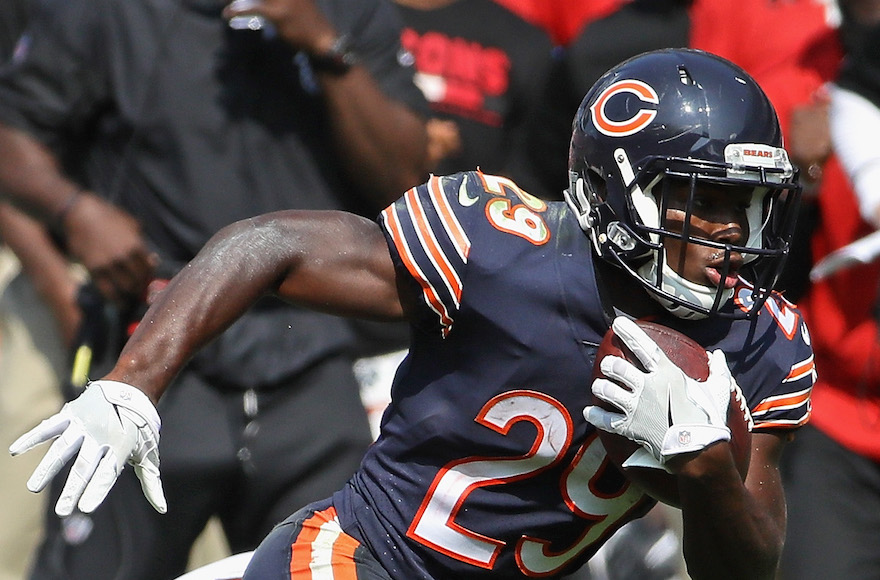 (JTA) — Since Jewish star player Julian Edelman is out for the entire 2017-18 NFL season after tearing his ACL, Jewish football fans may be looking for a new player to root for.

On Sunday, during the league’s first full slate of games, a possible candidate emerged: Chicago Bears running back Tarik Cohen.

Cohen, a rookie who was drafted in the fourth round of the draft back in April (not exactly a high pick) and played in college at North Carolina A&T (not exactly a high-profile school), proved his doubters wrong with a strong debut performance. He notched 66 rushing yards and 47 receiving yards, leading his team in both categories, and scored a receiving touchdown.

Along the way, he was involved in several plays that made highlight reels. Maybe fans shouldn’t have been so surprised. It turns out that Cohen’s nickname is “The Human Joystick,” and he can pull off special stunts like the catch below.

In the Jewish tradition, a Cohen is a Jewish priest. Historically, it’s one of the most popular Jewish surnames in the world. But is the Bears rookie Cohen a member of the tribe?

The team confirmed to JTA that he is not.

The team does have one actual Jewish player (and one more, like Cohen, with a Jewish-sounding name).

Wide receiver Daniel Braverman, who didn’t make the team’s player roster but remains on its practice squad (a group of backups who could be claimed by another team during the season), is Jewish. Defensive lineman Eddie Goldman, who is 6-4, 320 pounds and, like Cohen, African-American, is not Jewish.