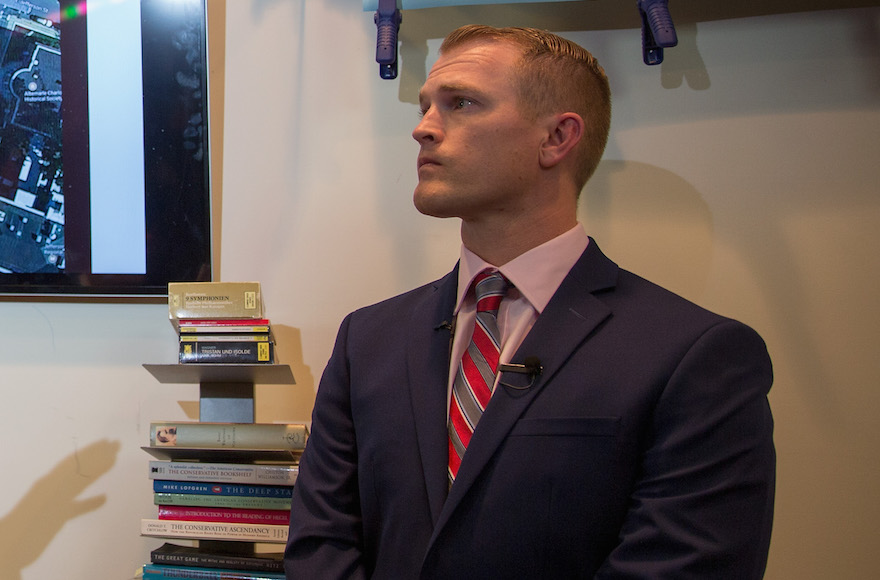 (JTA) — A group that took part in the recent white supremacist rally in Charlottesville, Virginia is embarking on a yearlong recruitment campaign on college campuses, according to the Anti-Defamation League.

Identity Evropa, a group founded last year that seeks to promote “white American culture,” is engaging in a campaign called “Project Siege,” which involves posting fliers and posters on campuses promoting its goals. The ADL, which  tracked a rise last school year in white supremacist activity on college campuses, has documented 12 campuses where the group has advertised in the new school year.

Identity Evropa led chants of  “You will not replace us” at the Charlottesville rally last month, which some rally-goers then paired with “Jews will not replace us.” Fear of “replacement” by immigrants is a major theme of European nativist movements. Identity Evropa supports a policy of “remigration” of immigrants out of the United States, and does not allow Jews as members.

In August, its members disrupted a pro-immigration forum at Miami-Dade College. During the 2016-2017 school year, the ADL reported 65 incidents of Identity Evropa materials on American college campuses.

“Identity Evropa is actively targeting campuses and their actions are extremely disruptive and unsettling to students,” said ADL National Director Jonathan Greenblatt. “The message is explicitly racist and anti-Semitic. They know they’re going to get a reaction when they show up on campus. Fortunately their message is near-universally rejected by students and faculty.