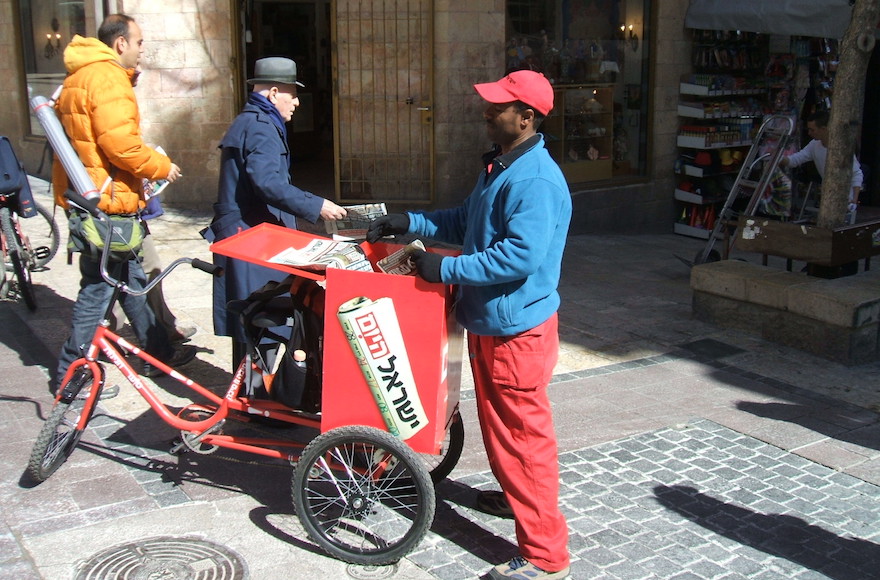 The lawsuit filed Tuesday alleges that the journalists knowingly lied in three reports that the New Israel Fund paid for a going-away event for a former Arab-Israeli lawmaker who was imprisoned in July for smuggling cellphones to Palestinian prisoners. It requests a total of 75,000 shekels ($21,000) in damages from the reporter, Yair Altman, and editor-in-chief, Boaz Bismuth.

“Israel Hayom is using its power to spread lies and propaganda, and this must stop,” the group’s director-general, Miki Gitzin, said in a statement. “The newspaper cannot blatantly ignore all the rules of journalistic ethics, or any basic decency, and will not be able to trample the truth under its feet.”

The New Israel Fund claims in the lawsuit that it told Altman and his editors the reporting was inaccurate prior to the articles’ publication in July. Afterward, the group says it asked the newspaper to publish an apology and correction, but Israel Hayom refused. Each article justifies damages of 150,000 shekels, the group claims, but it is asking for much less “in order to enable an expeditious and efficient investigation of the claim.”

Israel Hayom, which is funded by the pro-Israel American billionaire Sheldon Adelson and generally tows a pro-Netanyahu line, did not immediately respond to a request for comment.

The former lawmaker in question, Basel Ghattas of the Balad party, began a two-year prison sentence on July 2 as part of a plea deal in which he admitted smuggling cellphones and SIM cards to Palestinian security prisoners in Israel last year. At the time Ghattas said he was entering prison as a “freedom fighter” for the Palestinian people.

The evening before he entered prison, Ghattas attended a solidarity event for him in northern Israel that was attended by Ayman Odeh, the chairman of the Arab Joint List, of which Balad is a part, and Palestinian activists and artists.

“The New Israel Fund had nothing to do with Ghattas, and certainly had no hand or leg in any ‘parting event’ that was held for him,” Gitzin said.

Israel’s right-wing leaders often rail against the New Israel Fund for supporting left-wing nonprofits like the anti-occupation group Breaking the Silence and human rights group B’Tselem, which critics see as work to delegitimize Israel. In recent months, the Knesset passed controversial laws prohibiting Israelis from performing their national service for left-wing nonprofits and imposing on them new transparency requirements.

In July, Netanyahu accused the New Israel Fund of funding weekly demonstrations that for nearly a year have been demanding indictments in a raft of police investigations of him and his family, as well as associates. The group denied the claim.