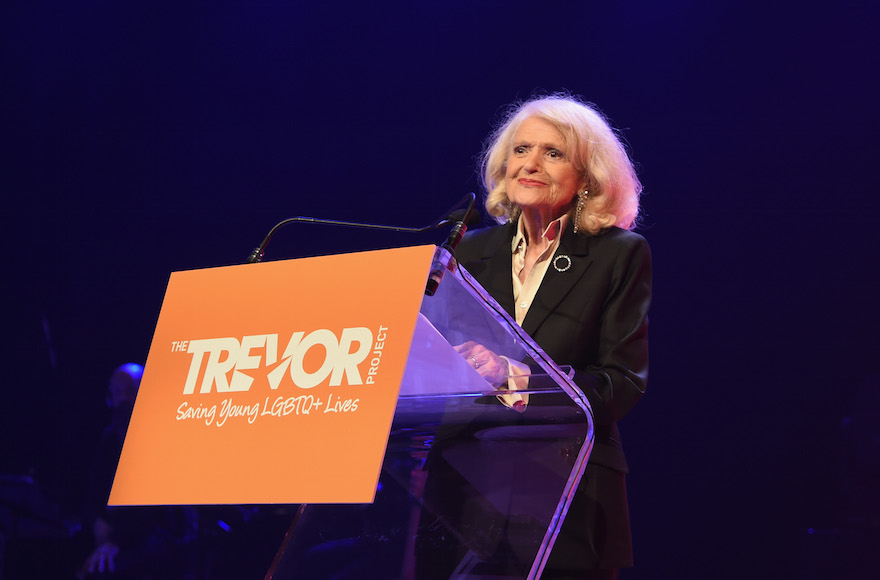 WASHINGTON (JTA) — Edie Windsor, whose fight for marriage equality ended with a historic victory and was suffused with her Jewish sensibility, has died at 88.

The New York Times on Tuesday quoted her second wife, Judith Kasen-Windsor, as confirming her death.

In 2009, Windsor was denied a spouse’s exemption and forced to pay federal taxes on the estate of her late wife, Thea Spyer, who also was Jewish, although their Canadian marriage was recognized as legal by the State of New York, where they resided. She pursued her case all the way to the Supreme Court, and in a narrow ruling in 2013, the court decided that the federal government must abide by the laws of individual states in its dealings with couples from those states.

That set the stage for a ruling two years later that removed all barriers to equal marriage rights.

“Because of today’s Supreme Court ruling, the federal government can no longer discriminate against the marriages of gay and lesbian Americans,” she said then in a statement. “Children born today will grow up in a world without DOMA,” the 1996 Defense of Marriage Act that denied federal benefits to partners of gay people. “Those same children who happen to be gay will be free to love and get married — as Thea and I did — but with the same federal benefits, protections and dignity as everyone else.”

After her win, she attended services at her Manhattan synagogue, Beit Simchat Torah, which was founded to serve the gay community, and listened to her lawyer, Roberta Kaplan, deliver a sermon on the win. Kaplan said Windsor’s victory was a landmark for Jews, particularly.

“The Jewish Theological Seminary, for the first time in its entire history, submitted an amicus brief in a court case,” Kaplan said in the sermon. “Which case, one might ask? Edie Windsor vs. the United States, when JTS, along with the entire Conservative movement, joined an amicus brief urging the Supreme Court to strike down DOMA as unconstitutional.

“Think about this for a moment if you will – less than 10 years ago, any gay rabbi ordained at the Jewish Theological Seminary had to be in the closet. Today, JTS signed on to a brief at the United States Supreme Court arguing that the marriages of gay people should be respected under the law.”

Windsor, who retired as a senior programmer at IBM, remained Jewishly involved. In 2016, she was one of 90 Jewish LGBTQ activists who signed a letter saying that anti-Israel protesters who forcibly shut down a reception at the National LGBTQ Task Force’s Creating Change conference displayed “dangerous” behavior.

Her first date with her second wife, Kasen-Windsor, whom she married last year, was at a Hanukkah party.

Former President Barack Obama marked her passing, saying in a statement that he had spoken with Windsor in recent days. He also recalled the 2015 Supreme Court decision removing bars to marriage equality two years after Windsor’s win.

“I thought about all the millions of quiet heroes across the decades whose countless small acts of courage slowly made an entire country realize that love is love – and who, in the process, made us all more free,” Obama said.