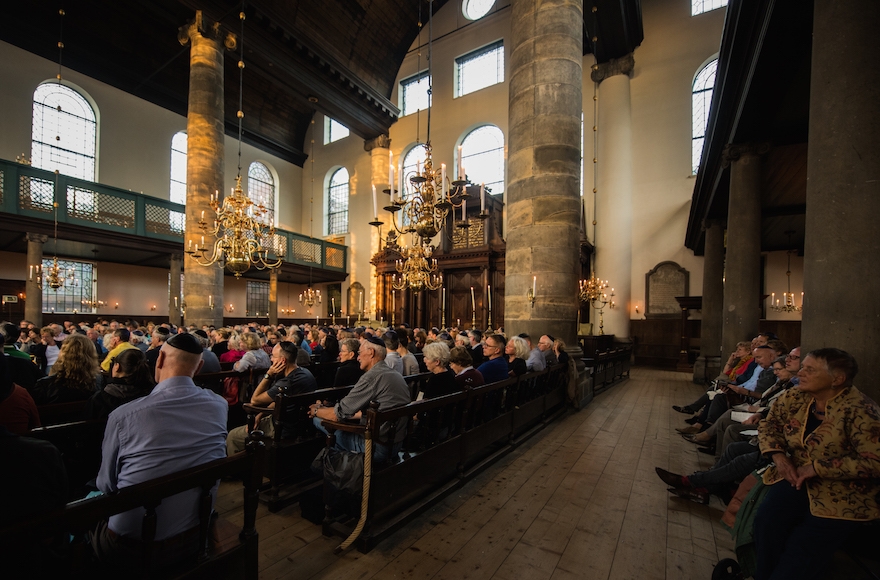 AMSTERDAM (JTA) — As one of Europe’s oldest and most impressive Jewish buildings, this city’s Portuguese Synagogue is known far and wide for its majestic beauty.

Built in 1675 for the descendants of Jews who fled religious persecution on the Iberian Peninsula, the Portuguese Synagogue today sees some 200,000 tourists annually. Inside its vast sanctuary, a massive Torah ark made of Brazilian Jacaranda wood towers over 17th-century furniture and a multitude of low-hanging golden chandeliers hang among 12 stone pillars.

Its architect is said to have drawn inspiration from Solomon’s Temple, and the synagogue would be Europe’s largest and most ornate, according to historians. While the Portuguese Synagogue was later eclipsed by even larger and more magnificent shuls — like the one on Dohany Street in Budapest — the Amsterdam building remains a spectacular sight on any day of the year.

Yet most of the synagogue’s visitors are not around on the day when its beauty shines brightest: Yom Kippur. On the holiest day of the Jewish calendar, the hall is packed to capacity as worshippers pray by the warm light of hundreds of candles — a tradition that dates back to the invention of electricity — accompanied by unique cantorial melodies that resemble operas.

“It’s one of European Jewry’s most profound and beautiful sights,” according to Esther Voet, a regular visitor to the synagogue and the editor-in-chief of the Dutch-Jewish NIW weekly. On Yom Kippur, entering the candlelit synagogue “has a cleansing effect – which is what Yom Kippur is all about,” she said.

It’s also like “stepping into a time machine,” she added. “You feel that you are a link in a very long chain of Jewish tradition.”

Few congregants experience this intergenerational dimension more than Ronit Palache, whose ancestors were among the early leaders of the synagogue.

“Coming there means being a part of history, and it’s my history,” said Palache, whose great-great-grandfather was a chief rabbi of the Portuguese Jewish community.

But you don’t need a personal connection to appreciate the historical dimensions of Yom Kippur services at the synagogue, according to Bart Wallet, a University of Amsterdam historian and author of the book “History of Jews in the Netherlands,” which was published in Dutch this year.

“There is growing interest in attending on Yom Kippur and, in response, the community only a few years ago started assigning pre-ordered tickets,” he said.

Some Jews, including Lipika Pelham, a London-based author and journalist with Indian roots, travel with their families especially to attend the Yom Kippur service here. Tickets cost just $22 but need to be ordered well in advance.

On Yom Kippur, the service is essentially conducted by the community’s men, who are seated around the bimah, or pulpit, in the central section of the main hall. Male guests sit in pews surrounding the central section. Women sit upstairs, in the women’s section, “where we struggle to follow the reading of the text below, which is not easy because of the acoustics,” Voet said.

Still, while it may be less than ideal for reading prayers, the acoustics at the Portuguese Synagogue work beautifully for musicians and singers — something that was key to the synagogue board’s decision 10 years ago to host occasional concerts here. During those events, non-Jewish audiences can get a taste of the Yom Kippur atmosphere because all the candles are lit.

The candles are illuminated as well when important dignitaries visit, including Dutch royals and world leaders such as Prime Minister Benjamin Netanyahu of Israel and the late President Shimon Peres.

On Yom Kippur, the men of the community put on the traditional Portuguese Jewish top hats, an article worn by Jews who immigrated here from Portugal, Spain and their colonies when they adopted the church’s anti-Jewish Inquisition as policy. The wood used for the Torah ark was brought from Recife by Jews who fled the Brazilian city for Amsterdam. Flanking the ark are two 16th-century sofas from the Middle East.

“The interior makes for a very cosmopolitan mix,” Wallet said. “You have artifacts from many corners of the world.”

Nowhere else in 17th-century Europe were Jews allowed to build a synagogue quite as large and impressive as the Portuguese Synagogue, Wallet added, which makes the building a testament also to the relative tolerance that Jews had enjoyed in the Netherlands for centuries, before the Nazis and local collaborators nearly wiped out the community.

With so much history in view, folklore inevitably grew around almost every aspect of the synagogue — even the fine sand that is strewn on its floor, which some believe is a reference to the desert that the ancient Hebrews crossed on their way to Canaan. In truth, though, the use of sand on wooden floor was a common cleaning and maintenance method in the 17th century that has disappeared almost everywhere else.

The Yom Kippur service also features prayers by Santo Servicio, the synagogue’s resident choir, which curates the special tunes that have evolved here over the centuries. Sung in Hebrew in the Portuguese inflection, the tunes are melodic because they were composed in the 16th and 17th centuries to please the ear and compete with Christian choirs, Wallet said.

It was part of a broader effort by community leaders to rehabilitate and preserve in Amsterdam what the Inquisition destroyed in Iberia.

That effort is also evidenced in the thousands of manuscripts of the Ets Haim Jewish library, the oldest institution of its kind still in operation, which is part of the Portuguese Synagogue compound.

“You can see in the books their enthusiasm about being able to reconnect with their Jewish traditions openly and resume the study of it,” said Ruth Peeters, a senior cataloger at the library.

The library’s central role in the daily life of synagoguegoers is evident in the name that locals use for this house of worship: Esnoga — a mashup of the Portuguese-language words for school, “escola,” and synagogue, “sinagoga.”

At times, enthusiasm led astray worshippers and even the community leaders.

Around the time the synagogue was built, the community was split between followers and opponents of Shabbetai Zevi, the Turkey-born Jewish eccentric who divided the Jewish world with his claim that he was the Messiah before his conversion under duress to Islam in 1666.

Even this community’s founding father and rabbi for 40 years, Isaac Aboab da Fonseca, for a while was a follower of the man who would be known as the “false messiah.” Wallet said the debate on the issue was “a crisis for the community,” but was largely purged from its official records.

But the community’s ultimate test came in 1940, when Nazi Germany invaded the Netherlands, initiating racist policies that ended with the murder of 75 percent of the Netherlands’ Jewish population of 140,000. The Portuguese Synagogue was sealed, its library and treasures looted.

But while Amsterdam’s Ashkenazi synagogue was gutted, the Portuguese Synagogue remained essentially unharmed.

“I think they didn’t quote know what to do with it,” Wallet said. “Ultimately even they didn’t dare destroy it.”