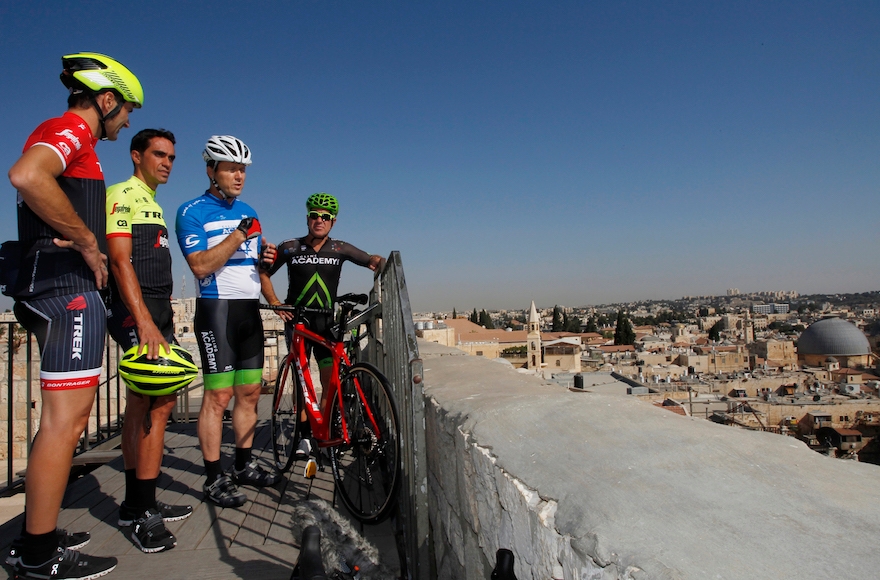 JERUSALEM (JTA) — Stressing the chance to show off Israel to the world, Israeli officials joined with their Italian counterparts in announcing Monday that three stages of the prestigious Giro d’Italia cycling race will be held in the country, starting in Jerusalem.

It will mark the first time that any leg of cycling’s Grand Tour races — the Giro, the Tour de France and the Spanish Vuelta — will take place outside of Europe, and just the 12th time the Giro had gone outside of Italy in its 101-year history.

Israeli officials said the race will be the biggest sporting event ever held in their country and touted it as an opportunity to showcase the Jewish state — and its capital — to the world.

“Hundreds of millions of viewers around the globe will watch as the world’s best cyclists ride alongside the walls of Jerusalem’s ancient Old City and our other historic sites,” Jerusalem Mayor Nir Barkat said at the hotel gathering. “Our message to the world is clear: Jerusalem is open to all.”

The race will bring more than 175 of the world’s best cyclists to Israel along with tens of thousands of tourists and cycling enthusiasts.

Culture Minister Miri Regev called on “everyone who loves the Giro to come here to Israel.”

“This bike race across the Holy Land will be a fascinating journey through time covering thousands of years,” she said. “I’m sure it will be a thrilling experience for everyone.”

Israel will host the first three stages of the Giro, or “the Big Start,” on consecutive days from May 4 to 6. Stage 1 will be a 6.3-mile individual time trial in Jerusalem, passing the Knesset and ending near the walls of the Old City. Stage 2, in the North, will start in Haifa with riders pedaling 103.8 miles down the Mediterranean coast to the Tel Aviv beach. Stage 3, in the South, will cover 140.4 miles through the arid Negev from Beersheba to Eilat on the Red Sea.

Italian officials told the Israeli newspaper Haaretz earlier this month that they were being careful to avoid crossing into politically sensitive areas, like the West Bank or eastern Jerusalem, which they feared could spark protests. An official map of the Stage 1 route shows it approaching but not entering the Old City, which is located in eastern Jerusalem — where much of the world, but not the Israeli government, envisions a future Palestinian capital.

According to the Italian daily Corriere della Sera, the route will pass the Yad Vashem Holocaust memorial as part of a tribute to Gino Bartali, an Italian cycling champion credited with saving hundreds of Jews during the Holocaust. While ostensibly training in the Italian countryside, Bartali, who won the Giro four times and the Tour de France twice, would carry forged papers in the frame and handlebars of his bicycle to Jews hiding in houses and convents. He also hid a Jewish family in his cellar.

In 2013, years after his death in 2000, he was recognized as a Righteous Among the Nations by Israel’s Holocaust authority, Yad Vashem. 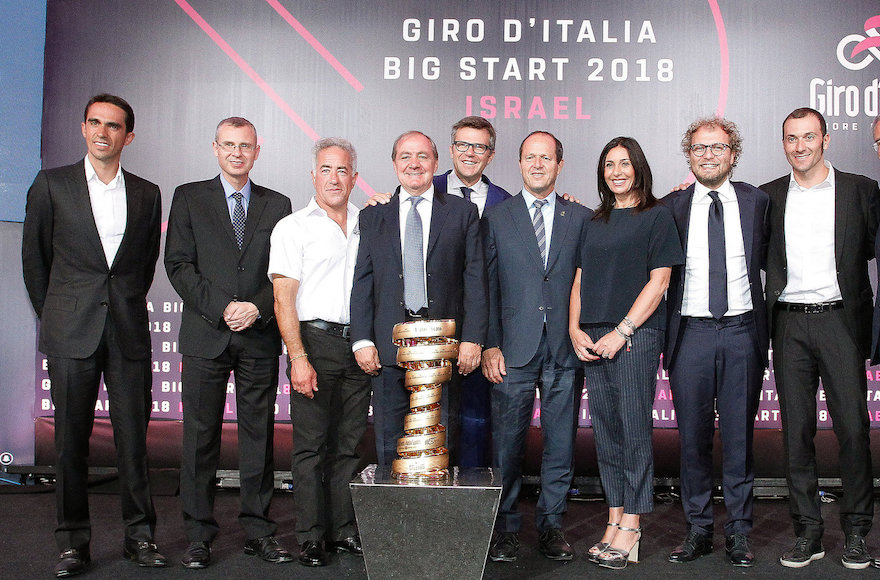 Alberto Contador, left, and Ivan Basso, right, former winners of the Giro d’Italia, with race and Israeli officials including Jerusalem Mayor Nir Barkat, fourth from right. (Courtesy of the Giro)

Italian Sports Minister Luca Lotti said Monday that the race would celebrate Bartali’s memory. In addition to being a great sports champion, he said, Bartali “was also an extraordinary champion of life, and a man of heroic virtues, and this needs to be commemorated, and shared, especially with the young generations — never to be forgotten.”

Retired Giro champions Alberto Contador of Italy and Ivan Basso of Spain, both two-time winners, also were on hand for the Jerusalem announcement.

Sylvan Adams, a Canadian real estate magnate and philanthropist who recently immigrated to Israel, helped bring the Giro to Israel and will serve as its honorary president. Adams said he was motivated by love of cycling and a desire to help his adopted country.

“I would call this the antidote to BDS,” he told JTA, referring to the global Boycott, Divestment and Sanctions campaign against Israel. “The media sometimes portrays our country in a negative way, and this is a way to bypass the media and go straight into the living rooms of 800 million people. They’ll see our country exactly as it is, and my experience is people almost universally have positive experiences when they encounter Israel.”

The Giro is just part of Adams’ larger plan to make Israel a cycling powerhouse. A co-owner of the Israel Cycling Academy, Israel’s first professional cycling team founded in 2014, he is building the first velodrome in the Middle East in Tel Aviv to be finished in time for the race.

“My plan is to bring Israeli athletes to the highest level of the sport,” he said.

Ran Margaliot, an Israeli former professional cyclist and the general manager of the Israel Cycling Academy, said the team has applied to compete in the Giro and will find out if it qualified in December. It is among 32 second division teams jockeying for a wild card spot, but he is hopeful.

“I certainly think we deserve an invitation,” Margaliot told JTA. “No one can tell me we’re not good enough, and we work as hard as the Europeans, even harder.”

Margaliot said that while he failed to achieve his ambition of becoming the first Israeli to race in a Grand Tour, the next best thing would be for an Israeli member of his international team to do it.

“You can imagine what it would mean for an Israeli rider to be racing in his own country, passing near his home and friends and family,” he said before catching himself. “But we have a lot of work to do to get ready.”