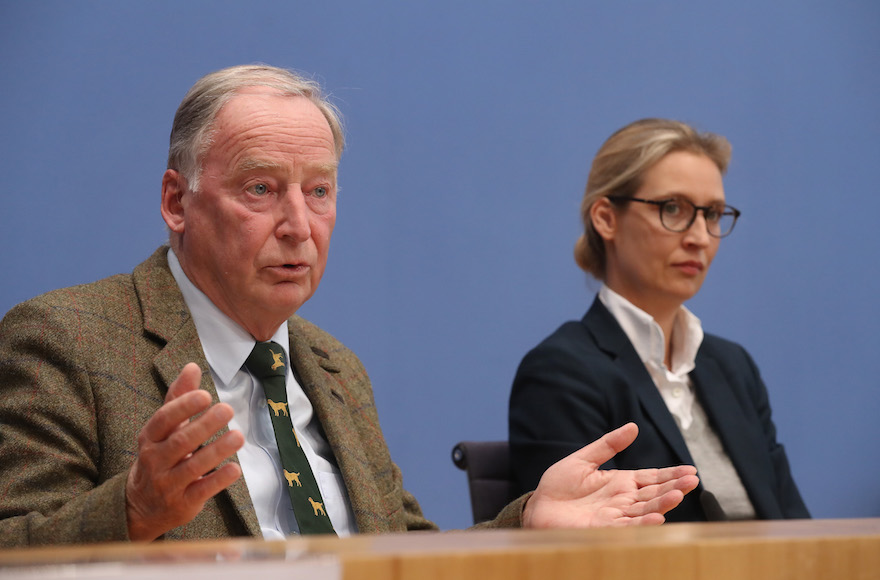 Co-leaders of the right-wing Alternative for Germany (AfD) party, Alexander Gauland, left, and Alice Weidel, speaking to the media at a press conference in Berlin, Sept. 25, 2017. (Sean Gallup/Getty Images)
Advertisement

(JTA) — Jews should not fear the strong election showing by the Alternative for Germany, a leader of the populist far-right party said.

“There is nothing in our party, in our program, that could disturb the Jewish people who live here in Germany,” co-party head Alexander Gauland told reporters Monday, a day after AfD garnered more than 13 percent of the vote to finish third in German national elections.

Gauland also said that he was ready to meet with German Jewish leaders “at any time.”

Chancellor Angela Merkel was re-elected to a fourth term and reportedly has rejected the idea of including AfD in a coalition government.

“Unfortunately, our worst fears have come true: A party that tolerates far-right views in its ranks and incites hate against minorities in our country is today not only in almost all state parliaments but also represented in the Bundestag,” the president of the Central Council of Jews in Germany, Dr. Josef Schuster, said in a statement issued late Sunday.

“I expect all our democratic forces to unveil the real face of the AfD and to expose the party’s empty, populist promises. The goal that should unite all democratic parties: to make it clear to the voters that the AfD is not an alternative, so that it can land where it belongs — under the 5 percent hurdle! ”

The council called on the parliament to “fight for democracy and to defend its values ​​vehemently” in the face of the AfD successes.

The Anti-Defamation League called AfD’s entrance into the national parliament “a disturbing milestone in modern German politics,” saying the party is “proudly extremist, anti-immigrant, and anti-minority.” The party leaders have made anti-Semitic statements and played down the evil of the Nazi regime, the ADL also said in its statement.

“Chancellor Merkel has a strong track record of protecting the Jewish community and other minorities,” CEO Jonathan Greenblatt said. “We appreciate that she has excluded the possibility of AfD joining her coalition, and we count on her strong leadership going forward to diminish the appeal of AfD among German voters.”

Hundreds of protesters gathered in cities throughout Germany on Sunday evening to protest the AfD’s election successes. In the Alexanderplatz public square in central Berlin, protesters chanted “Racism is not an alternative,” “AfD is a bunch of racists” and “Nazis out!”