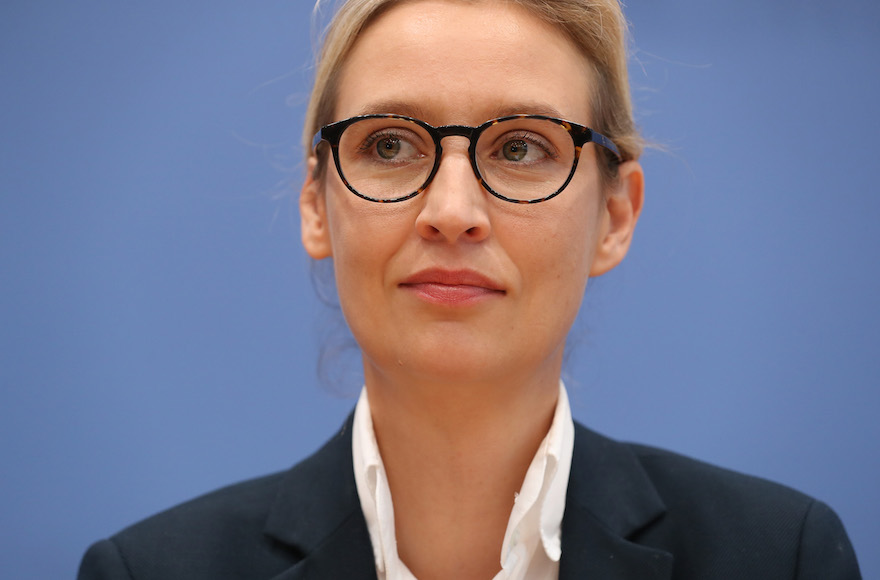 The victory, however, was hardly a landslide: With some 6 million votes, the populist, far-right Alternative for Germany, or AfD, finished in third place, securing 94 seats in the national parliament, the Bundestag, which now has 709 seats in all.

With a platform focused on Islam and migration, and rhetoric tinged with Nazi tropes, the AfD garnered 12.6 percent of the vote — nearly three times better than in 2013.

The unprecedented showing for a far-right party in postwar Germany alarmed Jewish and Muslim leaders.

“A party that tolerates right-wing extremist ideas in its ranks has managed not only to win seats in almost all our state parliaments, but also in the Bundestag,” Josef Schuster, head of the Central Council of Jews in Germany, said in a statement.

Schuster expressed the urgent wish that German democratic leaders “reveal the true face of the AfD, and expose its empty, populist promises.”

Here is a look at the AfD: its history, its leaders and backers, and where the party stands on key issues.

When was the AfD founded, and why?

Riding a wave of popular resentment against German bailouts of bankrupt European Union member states, the party was launched in April 2013. The AfD has since developed into an anti-immigration, anti-Muslim and euro-skeptical party.

The party gained popularity primarily for its attacks on Merkel’s liberal policy toward refugees — since 2015, Germany has opened its doors to more than 1.5 million, mostly Muslims — and xenophobic and nationalistic campaign platforms. Akin to President Donald Trump’s “America First” position and the U.K.’s rejection of the European Union, the AfD promotes a “pro-Germany” stance, even going so far as to urge citizens to have more babies “made in Germany.”

Who are the party’s leaders?

The party has a moderate and a far-right fraction. Heading the latter is Alexander Gauland, a 76-year-old attorney and journalist who left the conservative Christian Democrats after 40 years to co-found the AfD. His “moderate” counterpart is Alice Weidel, a 38-year-old economist.

Gauland recently said Germans “don’t have to be held accountable anymore for those 12 years [of the Nazi regime]. They don’t affect our identity today any longer. And we’re not afraid to say so.”

Germans, he added, “have the right to be proud of the achievements of German soldiers in two world wars.”

Right-extremist parties in Germany have learned over the years how to avoid pitfalls: They don’t deny the Holocaust, which is illegal. But they might say it wasn’t as bad as Jews make it out to be, or that the firebombing of Dresden was worse.

Recently, Bjorn Hocke, the AfD party leader in the eastern German state of Thuringia, caused a stir when he said that too much attention to the Holocaust was making German history “appalling and laughable.” He called the Holocaust memorial in Berlin a “monument of shame” and has recommended a radical departure from “these stupid politics of coming to grips with the past.”

Hocke said “we need nothing other than a 180-degree reversal on the politics of remembrance.”

A party candidate in the western state of Saarland, Rudolf Muller, is under investigation for allegedly selling Nazi paraphernalia in his antiques store.

Concerning their attitudes toward Jews, “many AfD members do share anti-Semitic ideas,” Jan Riebe, who has researched anti-Semitism within AfD for the Berlin-based Amadeu Antonio Foundation, said in an interview with Deutsche Welle.

While the party itself may not be anti-Semitic, many members “believe that Jews are the masterminds of all evil,” Riebe said. “So, in that sense, anti-Semitism does play an essential role in the AfD.”

Riebe added that a former member of the AfD in the Weserbergland region, Gunnar Baumgart, once wrote that Zyklon B, the poison used in the gas chambers, “was used to protect lives and that not a single Jew was killed by it.”

Dirk Hoffmann, a party executive in Saxony-Anhalt, equated Israeli policies in the Palestinian territories with the Holocaust.

Wolfgang Gedeon, an AfD legislator in Baden-Württemberg, has been accused of spreading anti-Jewish propaganda, among other things by reviving debate about the infamous anti-Semitic hoax “The Protocols of the Elders of Zion.”

“The AfD instrumentalizes Judaism and Jewish people, but has no interest in a real Jewish life in Germany,” said Sigmount Konigsberg, a Berlin Jew writing in a commentary for Austrian Jewish online magazine juedische.at.

AfD also wants to ban kosher slaughter in Germany, as well as the import and sale of kosher meat, in line with its opposition to halal, or Islamic ritual  slaughter.

“This puts them squarely in the camp of [Hitler’s] National Socialist party, which banned kosher slaughter as early as April 1933,” Konigsberg wrote.

Furthermore, he wrote, “if Holocaust remembrance is termed a ‘Cult of Guilt’ and AfD chairman Gauland is proud of the Wehrmacht, then we can all put two and two together and understand the consequences.”

Some observers have noted that other parties have their share of anti-Semites as well and should be scrutinized in that area as much if not more than the AfD. In particular, they say, left-leaning parties are far more likely to be anti-Zionist and supportive of boycott movements against Israel than are parties on the right. 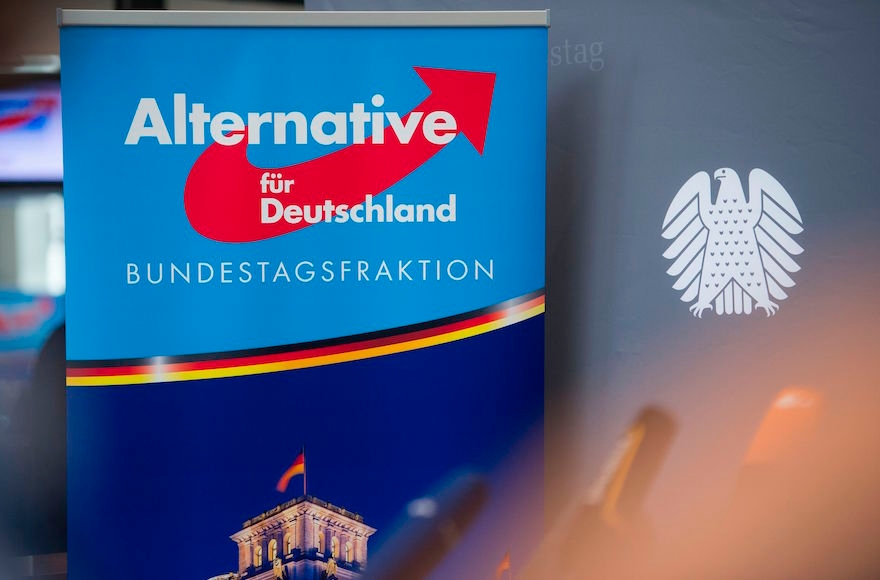 Who are some of the party’s legislators?

Among those expected to take seats in the Bundestag are:

* Martin Hohmann, former member of the Christian Democratic Union, who in 2003 referred to Jews as a “nation of perpetrators.”

* Siegbert Droese, a nationalist who last year raised eyebrows when it turned out that one of his cars bore the license number AH 1818 – the initials of Adolf Hitler in letters and numerals.

* Wilhelm von Gottberg, who in a 2001 essay quoted Italian Holocaust deniers and commented, “We have nothing to add here.”

* Detlev Spangenberg, a former informant for the East German state security apparatus, is a German nationalist who reportedly wants to see the country’s 1937 borders restored.

What about the AfD’s views on Israel?

Though the AfD decided not to include a discussion about Israel in its party platform, reportedly because of concern by some party leaders about Israeli “war crimes,” there has been a generally supportive attitude toward the Jewish state.

Observers say there are two reasons for this: Israel is seen as a bulwark against radical Islam, and support for Israel is used as an alibi against charges of anti-Semitism.

But only one day after Sunday’s elections, Gauland triggered a debate about whether Israel’s right to exist should really be a German “reason of state” – referring to Merkel’s 2008 declaration of solidarity in the Knesset.

“Of course we stand with Israel,” the co-party leader emphasized at a news conference, while questioning whether the viability of the Jewish state should be high on Germany’s agenda. But if that would mean “that we are really prepared to sacrifice our lives for the State of Israel,” he said, “I don’t feel that way.”

Meanwhile, the AfD head in the state of North-Rhine Westphalia, Marcus Pretzell, told the Suddeutsche Zeitung newspaper that he would not support any change in the status of Germany’s support for Israel, which he termed Germany’s only reliable partner in the Middle East.

In Israel, reactions to the AfD’s success were mixed: While some Israeli politicians look to Europe’s populist parties for support in fighting radical Islam, others have called the AfD’s evident appeal to right-wing extremists and racists a warning signal for Israel and Jews.

Who supports the party?

The largest base of support comes from Germany’s eastern states, where it received more than 20 percent of the vote. Nationwide, the AfD has some 23,000 members. By contrast, Merkel’s Christian Democrats have more than 400,000.

Jewish supporters of the AfD may not be many or vociferous, but some — like the Berlin-based artist Pavel Feinstein — have openly declared that the AfD is “the only party that will stop this invasion” of Islamist extremists.

“You don’t have to marry” the AfD, Feinstein told JTA in an interview last year.

Some observers say the AfD has drawn voters from across the political spectrum — including those who never voted — and liken its success to the approval for Brexit in the U.K. and the election of Trump in the United States. This phenomenon has been described as a “radicalization of the center,” though it remains to be seen whether the AfD’s strong showing will lead Germany’s mainstream parties to whistle a more populist tune.