Ye gods! An Australian lamb commercial has some real, and fake, foes 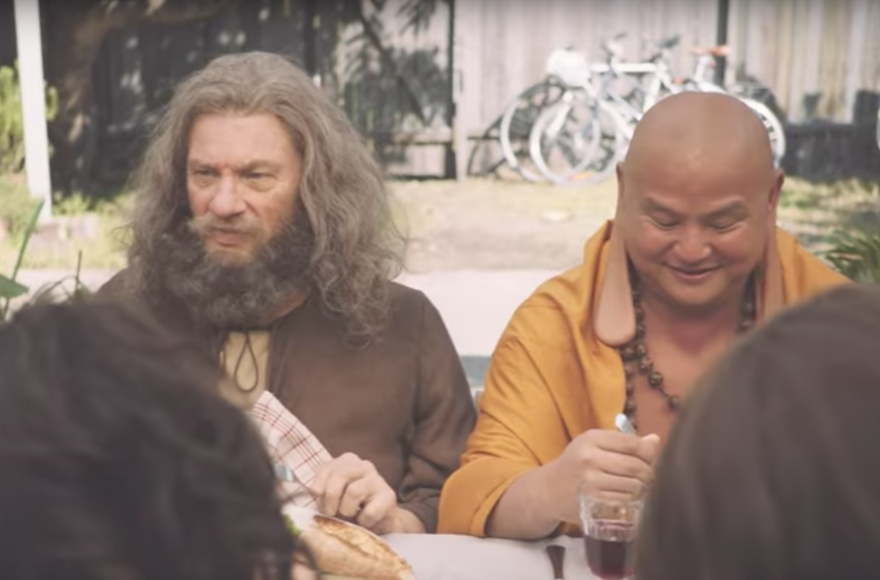 Moses seated next to the Buddha in (Screenshot from YouTube)
Advertisement

(JTA) — Moses, Jesus and Buddha break bread at an outdoor banquet, where they discuss the merits of lamb.

It’s the latest commercial from Meat & Livestock Australia, a trade group that is well-known in the country for its humorous “You Never Lamb Alone” ads that try to push consumers’ buttons. Thor, Aphrodite and gods and deities representing Hinduism, Scientology and other religions and movements join the above trio in joshing about cell phone etiquette and performing a few minor miracles. (Muhammad is a no-show, explaining he has to pick up a child from day care.)

Some, however, found the commercial to be in baaa-d taste: The Consulate General of India in Sydney and the U.S.-based Universal Society of Hinduism urged the Australia Advertising Standards Bureau to ban the campaign, saying it was disrespectful to use the Hindu deity Lord Ganesha to sell lamb meat.

Jewish groups have not objected, but a hacked version of the video being shared on the internet claims, falsely, that YouTube banned the ad because of objections by the Anti-Defamation League.

Appended to the hacked version is a text statement alleging that “YouTube has declared this ad offensive, and it is not eligible for monetization. Hence the censorship from the Jewish ADL is dictating what is acceptable and where the world’s advertising dollars go. Creators are now denied $100,000,000 as YouTube funnels revenue to their chosen creators.”

A spokesman for Meat & Livestock Australia told JTA the original ad can be found only on its YouTube channel and that the hacked version appears on an unknown channel hosting fewer than 100 subscribers. Nevertheless, the hacked ad has received over 50,000 hits.

Although the ADL didn’t criticize the ad, Meat & Livestock Australia acknowledged that there were complaints from other groups, which were dismissed by the Advertising Standards Bureau.

“There was never an intention to offend, rather we wanted to ensure that we were as inclusive as possible,” Meat & Livestock Australia said in a statement. “To this end, those religions that don’t typically eat red meat are not shown consuming Lamb in the advertisement, but are still invited to the table.”

“We know that Lamb has been the meat that brings everyone together for decades, and what better way to celebrate the product than over a modern spring barbecue,” Howie said. “Our marketing aims to reach more consumers by making lamb more relevant to a diverse, modern Australia. This time around we are highlighting the diversity of religious beliefs, backgrounds and dietary requirements in modern Australia.”

The ADL and Australia’s Kashrut Authority did not respond to calls seeking comment.