In Mexico City, this Jewish NGO is the go-to agency for earthquake relief MEXICO CITY (JTA) — I was on the 11th floor of an office building here when the ground started moving. There had been a mock evacuation that same day in remembrance of the 1985 earthquake that killed more than 10,000 people, but this was no drill.

According to protocol, everyone ran toward the building’s columns — structurally the safest place to be in an earthquake. I closed my eyes as the rumbling worsened, focusing on my breath and hugging the concrete structure as ceiling lamps came down, breaking the long wooden tables. Through the window, I saw clouds of dust billowing behind the skyline.

The 7.1 magnitude quake on Sept. 19 toppled 38 buildings in Mexico City and killed over 300 people nationwide. Two buildings collapsed next to my apartment in the Condesa neighborhood, and many more in Roma — both historical centers of Mexican-Jewish life. Although most Mexico City Jews moved to the city’s outskirts following the aftermath of the ’85 temblor, which destroyed both areas, the neighborhood is still home to five synagogues, a Jewish archival center, a kindergarten and a Holocaust museum.

I realized an hour later that my house was uninhabitable — windows busted, cracks across the walls, bathroom tiles scattered on the ground — and I joined an exodus of thousands of walkers (the highways needed to be cleared for emergency vehicles) as we made our way out of the disaster zone.

I stayed at my parents’ place, returning to the neighborhood two days later. The roads had been blocked by the army and marines. The parks were turned into supply centers, with thousands of volunteers making human chains and trying to help out those stuck in the rubble.

Half a block from the Alianza Nidjel Israel synagogue on Acapulco Street, whose structure was severely affected by the quake, Cadena, a Mexican-Jewish NGO specializing in humanitarian aid, set up shop. A line of about 20 people was standing waiting to be registered as volunteers, and many more were running around fetching what was needed and loading it on trucks.

During its 12 years of existence, this small organization (only 10 people work full-time) has helped over half a million people in Mexico, Haiti, Turkey, Chile, Guatemala, Ecuador, Belize and Costa Rica. Through partnerships with the American Jewish Joint Distribution Committee, IsraAID, local Jewish communities and other humanitarian organizations, Cadena has been able to operate nimbly and at incredible speed, mobilizing the human resources of the Jewish world to get to the most impenetrable disasters zones in record time.

In Condesa, Cadena repurposed the parking lot of a residential building near the synagogue as a warehouse for donated goods essential to the rescue operations in Mexico City and beyond. When I got there, the donations had been meticulously categorized into types of aid (“medicine,” “axes,” etc.) and there was a constant influx of trucks and vans — including police and army vehicles — coming to stock up on supplies. Some supplies were destined for the nearby states of Morelos and Puebla. Others, such as insulin packages, were sent via bicycle to help the victims of a building that had collapsed nearby.

By the time the latest earthquake struck, Cadena already was performing activities on the ground in the aftermath of a quake on Sept. 7 — the strongest one in a century. It had ravaged the south of Mexico, and Cadena was assisting those affected in the states of Oaxaca and Chiapas.

On Sept. 19, the organization deployed its Go Team, which specializes in rescuing victims from toppled structures, in the nation’s capital. In coordination with the 70 Israeli soldiers who arrived to help in the relief efforts and the Mexican army, team members visited the devastated zones.

“We are the only organization with special equipment that detects heartbeats,” Benjamin Laniado, CEO of Cadena, explained to me over the phone. “Thanks to this device we managed to rescue 25 people from underneath the rubble.” 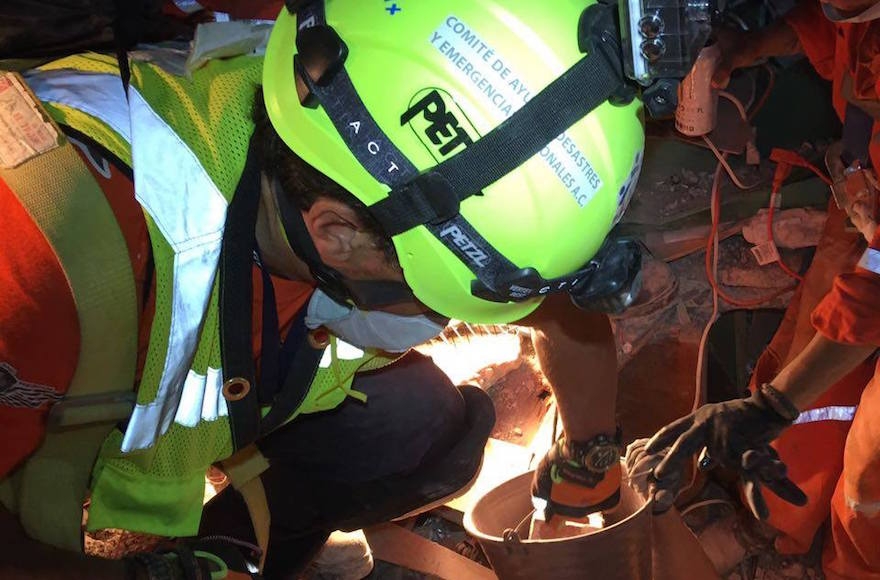 Members of the Go Team, a rescue unit of the Mexican-Jewish NGO Cadena, sift through the rubble of a collapsed building in Mexico City on Sept. 23, 2017. (Courtesy of Cadena)

At the Condesa center, Miriam Kajomovitz, a fundraiser for the organization, had been working nonstop coordinating the delivery of the supplies even though she had been evacuated from her house after a building collapsed next to hers.

“We need hands,” she told me the day I visited as we approached the eve of Rosh Hashanah. “People are going to go home for their meals and leave us.”

The worry proved unfounded — many of the volunteers decided to forego the celebrations and continue to help out.

In a country where suspicion of government runs high, Cadena has positioned itself as an effective humanitarian alternative. Lately, the Mexican press has been running articles about the illicit use of relief funds for electioneering purposes in the state of Oaxaca. Public intellectuals like the Jewish writer Sabina Berman lambasted government-run relief efforts as inefficient and overly centralized. In the town of Juchitán de Zaragoza, Oaxaca, Cadena provided relief before any government help had arrived, according to The New York Times.

“We wanted to donate to a transparent, credible organization that was not affiliated with any political party,” said Raul Cardos, CEO of a communications firm that designed a mock Airbnb platform called Arriba México to raise funds for the victims. “When we tell people that the funds go to Cadena, they are more willing to help out.”

Clara Zabludovsky, a Mexican Jew who lives in London, found out about the destruction as her plane touched down in San Francisco. She has since raised over 17,000 British pounds ($23,000) toward a GoFundMe goal of 18,000 pounds , a lucky Jewish number — all of which will go to the NGO.

Now that a week has passed since the temblor, people who live in Condesa and Roma are coming to terms with the loss. The immediate urgency has receded, and questions about long-term damage to buildings are taking center stage. The continuing gentrification of what an American magazine recently called “Mexico City’s reigning axis of cool” is now in question.

On Sunday, Cadena shut down its emergency supply center in Condesa. In its week of operation, the center managed to send out 347 shipments to cover the needs of rescue workers in Mexico.

It’s not enough. The NGO is now organizing an international campaign to build temporary housing for those who lost their homes in Oaxaca and Chiapas. Cadena will be setting up tents with kitchen utensils, hygiene kits, water filters, beds and portable, ecological kitchens.

“There are thousands of people living in the streets, and it’s raining and cold,” Laniado, who is traveling to the state, told me. “The government reconstruction program takes too long, and in the meantime, people have nowhere to sleep.”

As for my building, it has been severely damaged. Specialists say it will take at least five months for it to be safe enough to withstand the next earthquake. I’m not taking the risk. For an unforeseeable time, I will be staying in my childhood home.