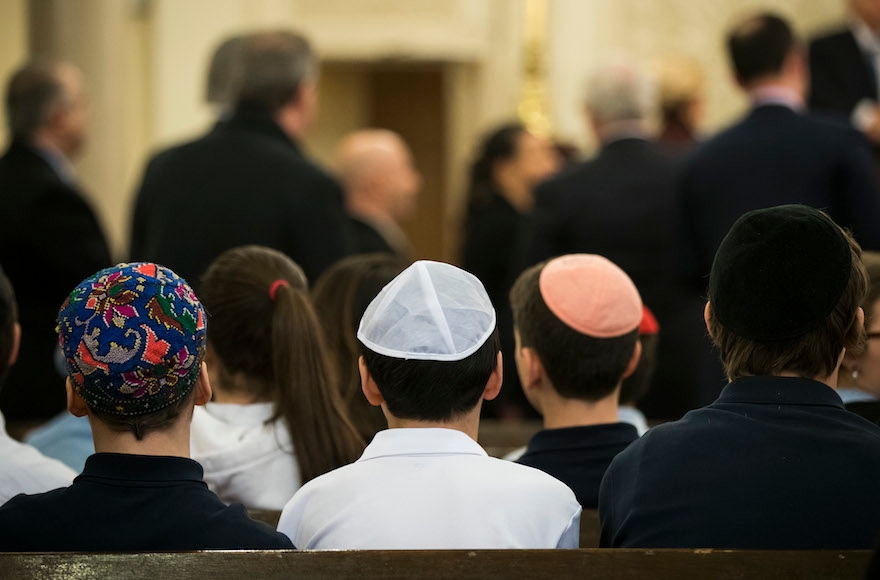 NEW YORK (JTA) — The Orthodox Jewish world is even more fragmented than you think.

That’s the key takeaway from a study published Thursday of Modern Orthodox Jews in the U.S., a group that adheres to traditional Jewish law while engaging with the secular world.

Some of them think women should be rabbis and others think they shouldn’t be synagogue presidents. Some say God controls their day-to-day lives, while others doubt God wrote the Torah.

Some oppose West Bank settlements, others the two-state solution. And they’re about evenly split between Republicans and Democrats.

Although Nishma Research, the Jewish polling firm that conducted the survey, did not provide an explicit definition of Modern Orthodoxy, the term tends to indicate Orthodox Jews who attempt to synthesize Orthodox observance with modernity, and more often than not have connections with Yeshiva University and its related institutions. Respondents were reached through synagogues “primarily” associated with the Rabbinical Council of America, the largest Modern Orthodox rabbinic organization.

(Haredi Orthodox Jews, who tend to be more insular and less likely to engage in secular education or culture, were excluded from the survey. The survey, citing a 2013 Pew Research Center study, says that among the country’s 500,000 Orthodox Jews, 220,000 identify as “Modern” in one way or another.)

Despite the differences among Modern Orthodox Jews, there are some points of commonality: The vast majority believe in God, send their kids to Jewish day schools and make incomes well above the national average.

Here are five key takeaways from the survey.

Unsurprisingly, Modern Orthodox Jews observe Jewish ritual at high rates. More than 90 percent observe the intricate rules of kosher and Shabbat, with nearly two-thirds saying they observe both strictly. Nearly three-quarters of men put on tefillin all or most days, and four-fifths of married couples observe the Jewish laws surrounding sexual relations and menstruation.

Nearly all men, and most women, attend synagogue almost every Saturday morning. Moreover, the study found that 40 percent of respondents became more observant over the past decade, while only 23 percent became less observant.

Modern Orthodox Jews also have the traditionalist beliefs to match their practices. Ninety percent either believe fully or tend to believe that God created the world, and more than three-quarters believe God intervenes in everyday life. Large majorities also believe God authored the Torah and the Jewish Oral Law, an expansive set of rabbinic writings and dictates that includes the Talmud.

But adherence to traditonalist beliefs and observance decline on the liberal side of the spectrum. Only 58 percent of Open Orthodox respondents believe God wrote the Torah, and less than half of Open Orthodox men regularly put on tefillin. And there’s a widening gulf between the left and right: The study found Open and Liberal Modern Orthodox Jews tended to become less observant over the past decade, while centrists and those on the right increased their observance.

A large portion of the income is dedicated to day school tuition, which in some places can top $40,000 per child per year. The survey found that 83 percent of Modern Orthodox parents send their kids to Orthodox day school; 90 percent of respondents called the cost of tuition a “serious problem.”

The group is also highly educated. More than 90 percent attained a bachelor’s degree, and more than 60 percent have a postgraduate or professional degree. And nearly one-fifth attended Yeshiva University, the flagship academic institution of Modern Orthodoxy.

And while Orthodox Jews may have gotten a reputation recently for political conservatism — another study found a majority supports President Donald Trump — this study found that Modern Orthodox Jews are evenly split, 52-48, between Republican and Democrat. The vast majority of non-Orthodox American Jews, by contrast, vote Democrat, and 71 percent of all Jews voted for Hillary Clinton last year, while the Orthodox community leaned toward Trump.

Most want an expanded role for women in the clergy.

Perhaps no issue has roiled the Modern Orthodox world in recent years as much as the debate over whether women can serve as clergy. A liberal Modern Orthodox seminary, Yeshivat Maharat, began ordaining women in 2009, and five Orthodox synagogues have hired its graduates as clergy (nearly all eschew the title “rabbi” and are referred to by other designations). But there’s been a backlash: In February, the Orthodox Union issued a ruling barring women from holding a title such as “rabbi,” or even from serving without title in a role in which she would be performing “common” clergy functions such as ruling on legal matters, officiating at life-cycle events, delivering sermons from the pulpit during services, leading services and serving as a synagogue’s primary authority. The same ruling urged an expanded role for women as teachers and pastoral counselors, and as lay leaders and professionals.

The traditionalist segment of the community believes in a much more limited public role for women. Only 29 percent of Right-Centrist Modern Orthodox Jews believe women should serve as synagogue presidents. Only 6 percent support an expanded clergy role for women, and only 4 percent among the Centrist Orthodox and right-leaning Centrists support  some type of title signifying a woman’s “rabbinic authority.”

The survey did not ask about attitudes regarding same-sex marriage or other LGBT issues. But it did note growing acceptance of gay people in the Modern Orthodox world. Fifty-eight percent of respondents supported synagogues accepting gay people as members, with 12 percent opposed and the rest unsure.

One-third of respondents said their attitudes toward sexuality have changed in recent years. An open-ended follow-up question found that a plurality cited increasing acceptance of gay people and “more openness in general.”

Young Modern Orthodox Jews are less attached to Israel than their elders.

Modern Orthodox Jews form the core of the religious Zionist settlement movement in Israel, and their counterparts in the United States tend to have right-wing views on Israel. But the younger generation in the U.S. is less committed to the Jewish state, according to the survey.

Overall, more than three-quarters of respondents strongly support a unified Jerusalem (presumably under Israeli control) and a majority strongly supports West Bank settlement building. Only 17 percent strongly support even considering a negotiated two-state solution, which under most models would entail a withdrawal from much of the West Bank. By contrast, the Pew study of American Jews found that only 17 percent overall feel settlements help Israel’s security, and 60 percent are optimistic about the chances for Israeli-Palestinian peace.

But on the Modern Orthodox front, this study found that younger Modern Orthodox Jews are less attached to Israel than their parents. While 87 percent of those over 55 say their emotional connection to Israel is very important, the number drops to 65 percent for those aged 18 to 34. In the younger group, only 43 percent feel it’s important to be personally active in support of Israel.