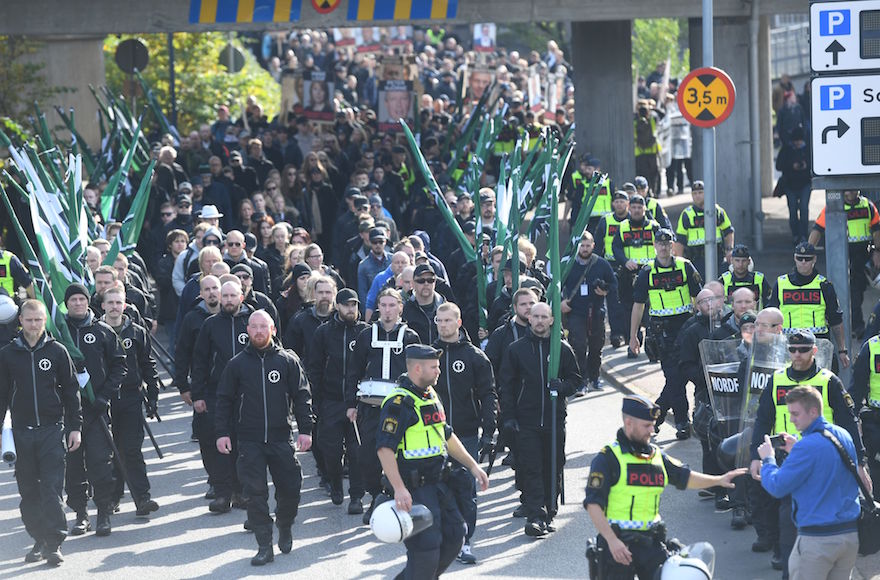 (JTA) — Jews in the Swedish city of Gothenburg expressed relief on Monday after a neo-Nazi march on Yom Kippur bypassed the city’s main synagogue and the community received hundreds of messages of support from groups and individuals.

On Saturday, 30 members of the far-right nationalist Nordic Resistance Movement, or NRM, were arrested when they did not follow their assigned route, clashed with counterprotesters and tried to walk toward the Scandinavia Book Fair, the largest literary festival in Scandinavia. Among those arrested was the group’s leader, Simon Lindberg.

Jews had worried about harassment and vandalism during the march, which was rerouted after appeals by the Jewish community that it not pass the synagogue on Judaism’s holiest day. Police presence around the synagogue was heavy, with cars patrolling the area as well as a helicopter and a boat in a nearby canal. The synagogue also provided additional security.

Despite this, Yom Kippur services went on as usual and had a large turnout, community chairman Allan Stutzinsky told JTA.

The Gothenburg community, which is typically under tight security and has approximately 1,000 official members, feared not only the neo-Nazi marchers but potential left-wing counterprotesters, Stutzinsky told JTA earlier this month. People affiliated with the NRM were responsible for anti-Semitic threats that led to the shuttering in April of the Jewish community center in Umea, a city in northeastern Sweden, according to Stutzinsky.

Jews in Gothenburg had worried that the synagogue would be vandalized with swastikas over the weekend, Stutzinsky said. Instead they woke up on Sunday to find that people had drawn hearts with chalk around the building in support.

Amid wide media coverage of the march, the community received hundreds of messages of support from groups and individuals. Stutzinsky, who earlier this month compared present-day anti-Semitism to that in pre-World War II Europe, praised the response.

“The threats exist, but they don’t dominate society. Civil society in Sweden stood up for us in a way that the civil society in Germany didn’t do in the ’30s. We have received a lot of support,” he told JTA.

Last month, the Jewish community appealed a police decision to allow the NRM to march along a route that would have taken them only about 200 yards from the city’s main synagogue on the Jewish holiday. The neo-Nazis had originally wanted to march on the main streets of Gothenburg, but the police offered the alternate route near the synagogue.

After appeals by the Jewish community, as well as several other groups in Sweden, an administrative court in Gothenburg rerouted the protest. The Anti-Defamation League and the World Jewish Congress also urged the Swedish government to ensure the Jewish community’s safety.

Still, the fact that the march took place was worrying, Stutzinsky said.

“We have people who openly follow Nazism and who publicly show that they are Nazis and that they have that agenda,” he said of the marchers.

Aron Verstandig, chairman of The Official Council of Swedish Jewish Communities, said Monday that the incident represented a larger trend of the rise of the far right, citing recent demonstrations across Sweden. On Thursday, Verstandig spoke with Swedish Prime Minister Stefan Lofven about the march. Lofven denounced the rise of neo-Nazi groups and said the government needed take action to combat such organizations.

Though the far right is worrying, the largest threat to the community comes from Islamist terrorism, said Verstandig, who also serves as chairman of the Jewish community in Stockholm. He cited recent terror attacks against Jewish institutions across Europe, including in 2015 on a synagogue in nearby Copenhagen that left one dead.

The community isn’t going anywhere, but the various security threats take a toll, he told JTA. The synagogue in Stockholm uses more than a fifth of the money it raises from membership dues to pay for security, in addition to members volunteering to patrol the synagogue.

“There is always something you need to consider,” Verstandig said. “If you go to the kosher grocery store in Stockholm and want to buy some ground meat, that meat is more expensive because there has to be security. It affects everything. If you want to go to a Shabbat dinner, we have to spend money on security. It makes it harder.”