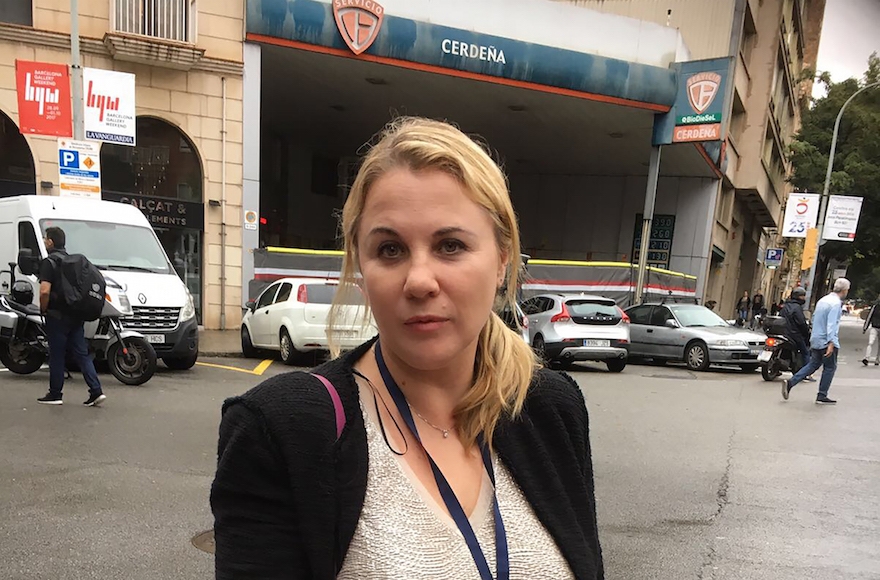 Ksenia Svetlova standing in front of a polling station in Barcelona, Oct. 1, 2017. (Courtesy of Svetlova)
Advertisement

(JTA) — Seeing armed police in riot gear outside a school in Barcelona, the Israeli lawmaker Ksenia Svetlova felt the instincts kick in from her days as a Middle East reporter for Russian-language media.

“One look was enough to see these officers were preparing for something bad,” said Svetlova, a Zionist Union lawmaker who was in the Catalan capital Sunday at the invitation of the local government as part of a team of international observers monitoring voting in a controversial referendum on independence.

Svetlova, who immigrated to Israel from her native Moscow in 1991 when she was 14, was on her way to the relative safety of a dark doorway when police shot rubber bullets into the crowd of people who had gathered to vote at the school on Sunday afternoon. Spain’s top court deemed the vote illegal, and authorities moved to suppress it with unusual force.

“What I saw was shocking,” she recalled in an interview Monday with JTA about one of the many confrontations that occurred Sunday across Catalonia between voters and police. “Officers of the law in a European Union member state were beating with batons and firing on people who were not even demonstrating but simply trying to exercise a democratic right.”

Svetlova viewed the clashes, in which 800 people were injured, as stark reminders not only of the decades-long aspiration for sovereignty in Catalonia – a region of Spain with distinct traditions and its own language – but also of what’s at stake for the European Union as its leaders pursue an unpopular federalist agenda amid growing resentment and nationalism.

The clashes occurred two weeks after the president of the European Commission, Jean-Claude Juncker, vowed greater unity in legislation, finance and security in the bloc despite the United Kingdom’s 2016 vote to leave the union. The Catalan referendum underlined how nationalism threatens not only inter-European federalism but the integrity of the EU’s members.

This is especially true in Spain, not only among Catalan separatists but Basques and residents of the  northern region of Galicia. In Belgium, the seat of the European Union, the pro-independence New Flemish Alliance has become a major power broker along with the separatist Vlaams Belang party.

In the United Kingdom, the Scottish National Party, plans to hold a second referendum on independence following a 2014 vote in which the plan did not receive a majority. In Italy, the rising nationalist right has been promoting secession for decades.

These phenomena, coupled with huge advances in the popularity of anti-EU nationalist politicians in the Netherlands and France — where Marine Le Pen of the National Front party won a historic 34 percent of the presidential vote — have raised the stakes for European governments. The trends may have contributed to the Spanish government’s decision to crack down on polling in a referendum deemed illegal.

Spain, emerging from a deep recession, has economic reasons to fear Catalan secession. The region’s 7.5 million inhabitants account for only 16 percent of Spain’s population, but their Mediterranean region supplies 20 percent of the kingdom’s gross domestic product with its huge international seaports and airports and the booming tourism industry. 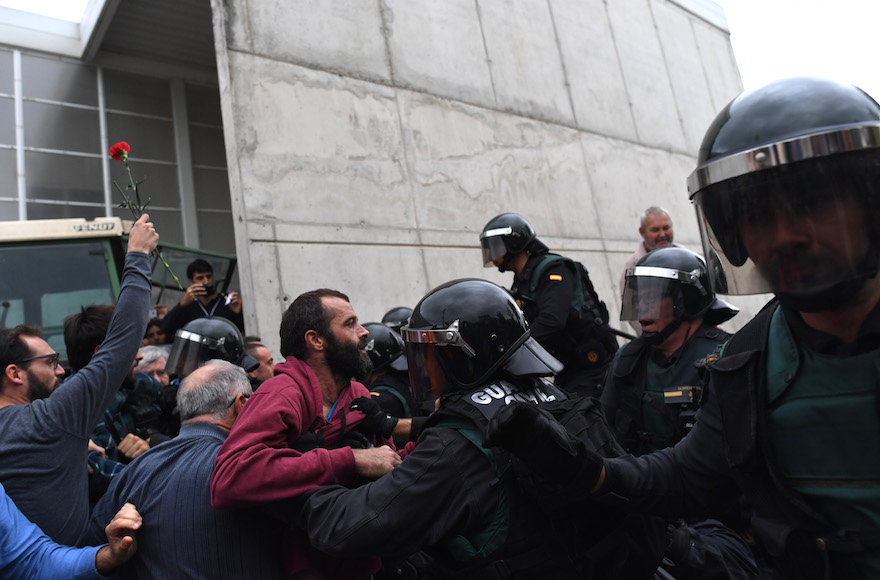 But by “beating old women at polling stations, it seems to me the Spanish government not only risked eroding democratic principles, but quite simply shot itself in the foot,” Svetlova said. From talks with Catalan leaders and ordinary people, “I learned that the violence only hardened the resolve of those seeking independence and helped them make the case to those who are still undecided.”

When it comes to the future of the effort to achieve statehood for Catalonia, “the Oct. 1 referendum was a watershed moment,” she said.

Some 90 percent of the 2.6 million Catalans who voted supported independence, according to the president of Catalonia’s regional government, Carles Puigdemont. He also said Catalonia now “has the right” to independence and that his government will sue Spain in European courts for alleged violation of human rights.

The independence issue divides Catalonia’s Jews — there are about 15,000 of them, constituting a third of Spain’s Jewish population. Their communal representatives opted for neutrality, Victor Sorenssen, the leader of Barcelona’s Jewish community, told JTA.

Ultimately, however, “the community’s institutions are cultural and religious,” Sorenssen said. “This is a political matter that doesn’t directly concern Judaism, so the community has no position on it as such.”

Svetlova, the Knesset member, is also mum on where she stands when it comes to Catalan independence – perhaps out of the realization that declarations by Israeli officials risk harming Israel’s relations both with Spain and potentially a future Catalan independent state.

But she is outspoken against what she calls the hypocrisy exposed in the referendum. Svetlova scoffs at the claim by Spanish authorities that allowing the referendum to take place would have compromised democratic principles because Spain’s top court, a guardian of its democracy, deemed it illegal.

“There have been 57 referenda on independence in recent decades in Europe, including in the Baltic states and the former Yugoslavia, and in many of those votes, which led to the birth of independent nations, the parent country opposed the referendum,” she noted. “So that doesn’t mean much.”

As an Israeli, though, seeing “unrestrained use of force against peaceful citizens” reminded her how Spain often condemns Israel’s “disproportionate use of force” against Palestinians.

“I think that in Barcelona, Spain lost the moral right to make these claims,” Svetlova said.