For Israelis, trend of scary clowns lurking after dark is no laughing matter 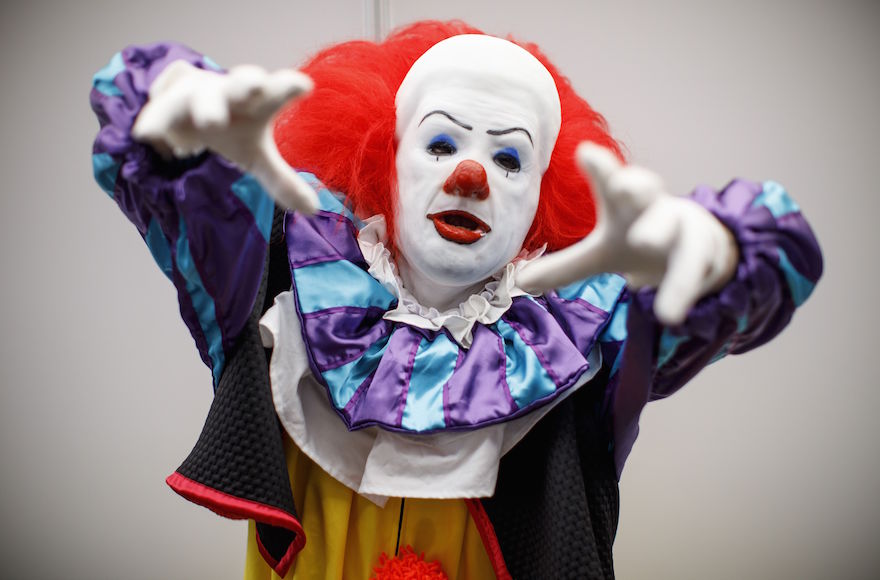 TEL AVIV (JTA) — Israelis aren’t particularly amused by a recent phenomenon in their country: teenagers dressing as clowns and lurking after dark. In fact, the costumed young people have caused a nationwide panic.

Since last week, dozens of the teens have been rounded up for scaring passers-by in parks and other public places at night. The incidents have happened in cities and towns as far flung as Afula in the north and Beersheba in the south.

The phenomenon is reminiscent of the “killer clown” craze that swept the United States last year. In Israel, the trend has been widely attributed to the popularity of the recently released horror movie “It,” which is based on a Stephen King novel and features a murderous clown.

In a Facebook post Tuesday, police confirmed that they had detained “many youths who had frightened civilians throughout the country.”

In the central Israeli city of Rishon Lezion, four 16-year-old boys were arrested Monday night for wearing clown masks to frighten visitors at a local park. Last week, police detained an 18-year-old man in central Ramle and four children younger than 12 in the Negev town of Dimona for similar acts.

While some of the detained were released after apologizing for clowning around, a number of incidents reportedly have resulted in injuries. According to a television report Tuesday on Israel’s Channel 10, two young men dressed as clowns pepper-sprayed a 10-year-old girl in Beersheba, while a 17-year-old male in the West Bank was lightly wounded when he fell while chasing a clown with a knife.

Israelis, of course, tend to be well-armed and are generally attuned to the threat of terrorism. Mix that with a ubiquitous rumor of scary clowns and it’s a potentially dangerous dynamic.

Case in point: A Dimona resident expressed relief to Channel 2 on Monday that he did not shoot someone dressed as a clown who startled him.

“As I was walking down the street on my way home in the middle of the night, someone jumped behind me with a clown costume and yelled at me — luckily I didn’t have a heart attack,” he said. “I had a pistol. Luckily I didn’t shoot him by mistake. This is really not funny.”

Indeed, both local and national officials are not treating the clown phenomenon as a laughing matter.

In their Facebook post Tuesday, the Israel Police vowed that “illegal” clown impersonators would continue to face “strict and uncompromising police enforcement.”At the same time, they urged the public “not to take the law into its hands and not to harm the youths,” most of whom have not caused any harm to people or property.

The police described the scary clowns as part of an “international trend that has gathered momentum on social media.”

The United States over the decades has seen various waves of hysteria over scary clowns. Last summer, hundreds of sightings were reported across the country. Many were hoaxes, but some led to arrests. In October, the White House even weighed in, with then-press secretary Josh Earnest saying, “Obviously, this is a situation that law enforcement is taking quite seriously.”

The sightings quickly spread to countries around the world. But Israel Police spokesman Mickey Rosenfeld told JTA on Wednesday that this was the first time the phenomenon had come to Israel in a serious way.

“We’ve seen a case here or there over the years, but nothing on this kind of major or national level,” he said.

The Israeli news website Ynet reported that teenagers were circulating a list of suggested times and places that clowns “should work” across the country. A video of a clown who appears to be holding a knife in Beersheba is making the rounds on Israeli social media.

In response to what it said were reports by students of scary clowns “lying in wait for civilians and children,” the Education Ministry issued guidelines Tuesday for handling the threats, including advising parents to “promote awareness of the issue” and report any encounters to the police.

For educators, the ministry advised, “It is important to emphasize and take into account the age of the students. The conversations must be adapted to their developmental stage, and shouldn’t frighten but rather convey soothing messages and increase their sense of security.”

Meanwhile, many professional clowns in Israel are worried that their image is being tarnished by the impostors.

Itzik Ozeri has performed for decades as Itzik the Clown in the local media, at parties and at Schneider Children’s Medical Center in Petach Tikvah.

“Everybody is afraid now that our jobs will go down,” he told JTA on Wednesday.

Safety is also a concern, he added. Ozeri said he was nearly assaulted Tuesday — he was parked outside a gig in Beersheba when a group of teenage boys walked by and, seeing him in costume, one shouted, “It’s the killer clown!”

The boys picked up stones to attack him, Ozeri said, but were stopped by a group of peers who explained, “This is Itzik the Clown. He’s a good clown.”

Ozeri said he understood the fear. Even his 25-year-old daughter, who grew up with a clown for a father, is afraid a clown will jump out at her on the streets at night.

Still, Ozeri said he has faith that this phenomenon — like so many others — will pass.

“I believe in God, I believe everything will be OK,” he said. “Just like this came, it will very soon pass.”