Breitbart, racists and the dirty work of laundering the ‘alt-right’ 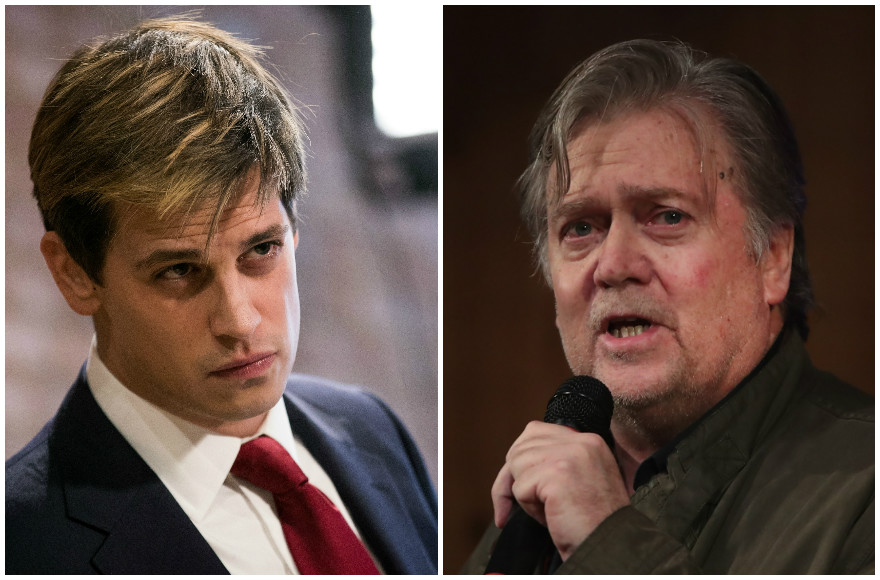 NEW YORK (JTA) — Stephen Bannon, whose anti-globalist insurgency at Breitbart News was interrupted briefly by his tenure as chief adviser to the Leader of the Free World, has always been adamant that his right-wing news site and worldview is neither anti-Semitic nor racist.

When he referred to Breitbart as a “platform” for the “alt-right,” Bannon didn’t mean, he insisted, that he personally supported the white supremacists and racists who attached themselves to his “populist nationalist” movement.

“Are there some people that are anti-Semitic that are attracted? Maybe,” he told Mother Jones in July 2016, a month before he was tapped to lead Donald Trump’s presidential campaign. “But that’s just like, there are certain elements of the progressive left and the hard left that attract certain elements.”

Truth be told, the evidence that Breitbart News is anti-Semitic has always been weak. Bannon and Breitbart often deal in tropes that set one’s anti-Semitism detectors a-tingling — mongering of global economic conspiracies, creepy talk about dangerous “elites” — but stop short of singling out Jews. And they can point to the site’s reliably pro-Israel reporting, which is often to the right of mainstream Jewish groups on some Israel issues.

It’s through that framing of Breitbart that I read the lengthy expose in BuzzFeed that purports to lay bare how one of Breitbart’s estwhile stars — the far-right provocateur Milo Yiannopoulos — sought the help and blessings of white nationalists and neo-Nazis while “laundering” their input and participation in the enterprise.

Based on emails and other documents obtained by BuzzFeed, the article features correspondence between Yiannopoulos and charmers like Andrew “weev” Auernheimer, described as a “system administrator of the neo-Nazi hub the Daily Stormer”; Devin Saucier, who “helps edit the online white nationalist magazine American Renaissance under the pseudonym Henry Wolff”; and Curtis Yarvin, purveyor of the fringe anti-democratic “neoreactionary” movement who has argued that neither Nazism nor slavery were as bad as they have been depicted.

The documents show that Yiannopolous sought input from all three men for an article he was writing that would explain the emerging alt-right to a general audience while staking Breitbart’s claim as the news site most congenial to its jumble of ideas. But they weren’t just interview subjects — Yiannopoulos and his co-author sent them drafts of the article for their approval, with the implicit understanding that while the published version would be “racially charged,” it would be careful to dissociate Breitbart’s version of the alt-right from the movement’s racist and anti-Semitic fellow travelers.

Published in March 2016, the resulting article, “An Establishment Conservative’s Guide to the Alt-Right,” was certainly racially charged: It describes the movement’s natural constituency as “mostly white, mostly male middle-American radicals, who are unapologetically embracing a new identity politics that prioritizes the interests of their own demographic.”

Yiannopolous and his co-author are careful to distinguish the alt-right’s community of “the more reasonable white identitarians” from the “real racists and bigots.” The latter, they explain, represent “old-school white supremacy” and invoke Hitler as a role model. Members of the alt-right, by contrast, “focus more on building communities and lifestyles based around their values than plotting violent revolution.”

Feel better about the alt-right? They’re not Nazis and racists — they just want to preserve their white identity in the face of mass immigration and liberal political correctness. Or, as Yiannopoulos writes, “They want to build their homogeneous communities, sure — but they don’t want to commit any pogroms along the way.”

This, mind you, is the version of the article Bannon was happy to publish, as emails between him and Yiannopolous attest. They indicate that Bannon considered Yiannopolous a protege of sorts, calling the younger man a “war correspondent” in Bannon’s assault on the establishment and engineering his rise as a Yippie-ish nemesis of feminists, Muslims, Black Lives Matter activists, women in tech and “social justice warriors.”

It’s not clear how much Bannon knew — or wanted to know — about the ways the article was vetted by the very groups he says will be “washed out” of the alt-right. But it appears other editors at Breitbart made sure Yiannopolous and his stable of writers and sources didn’t cross over from white identity politics to overt racism and anti-Semitism on its site. The documents obtained by BuzzFeed show Breitbart editor-in-chief Alex Marlow editing out of Yiannopolous’s work what BuzzFeed describes as “anti-Semitic and racist ideas and jokes.”

There are two ways to look at the evidence in the BuzzFeed story. The more charitable is to regard Bannon, Marlow and other Breitbart editors as gatekeepers trying to keep the loonies and bigots out of a movement they consider reasonable and well-intentioned. After all, as Bannon is known to ask, doesn’t the left work hard at keeping the communists, anarchists and anti-Zionists out of its own mainstream? According to this reading, Bannon might be compared to William F. Buckley, who used his own platform at the National Review to purge the conservative movement of its anti-Semites, Birchers and other lunatics.

But the more apparent portrait is of a budding media empire that seems intent on growing its own market share, and political power, by courting some of the coarser and most hateful elements on the American right — or turning a blind eye to the staffers doing the dirty work. It shows its one-time star literally seeking the approval of the farthest of the far right, even as he and they agree that Breitbart risks too much in acknowledging their influence.

That was the conclusion conservative blogger Ben Shapiro reached when he resigned from Breitbart in March 2016.

“Breitbart has become the alt-right go-to website, with Yiannopoulos pushing white ethno-nationalism as a legitimate response to political correctness, and the comment section turning into a cesspool for white supremacist meme-makers,” Shapiro wrote, referencing the “Establishment Conservative’s Guide.”

Earlier this year, Yiannopolous resigned from Breitbart after a video emerged in which he seemed to condone pedophilia. Bannon is out of the White House and back at Breitbart, plotting what he calls a “day of reckoning” for the Republican establishment. When he left, President Trump wished him well, tweeting, “Steve Bannon will be a tough and smart new voice at @BreitbartNews…maybe even better than ever before. Fake News needs the competition!”