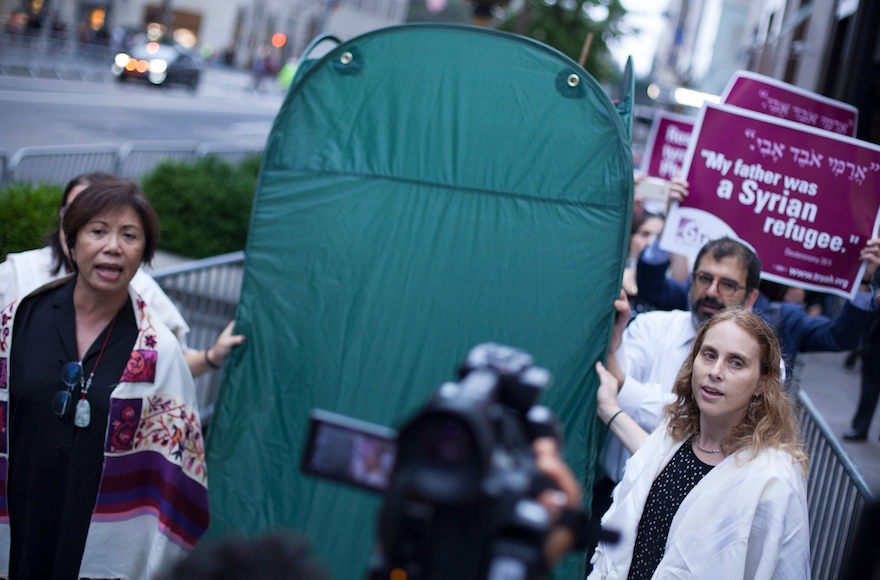 (JTA) — Sukkot, the Jewish harvest festival, has always been a holiday about enjoying the season, accepting human vulnerability and, while eating and sleeping in a fragile temporary booth, or sukkah, appreciating divine protection. But every year Jews — and sometimes non-Jews — find ways to also make the holiday about improving the world.

We’ve rounded up a few unique sukkahs that are being used to build bridges, break stereotypes and spark change.

In New York, rabbis marched with a portable sukkah to support immigrants 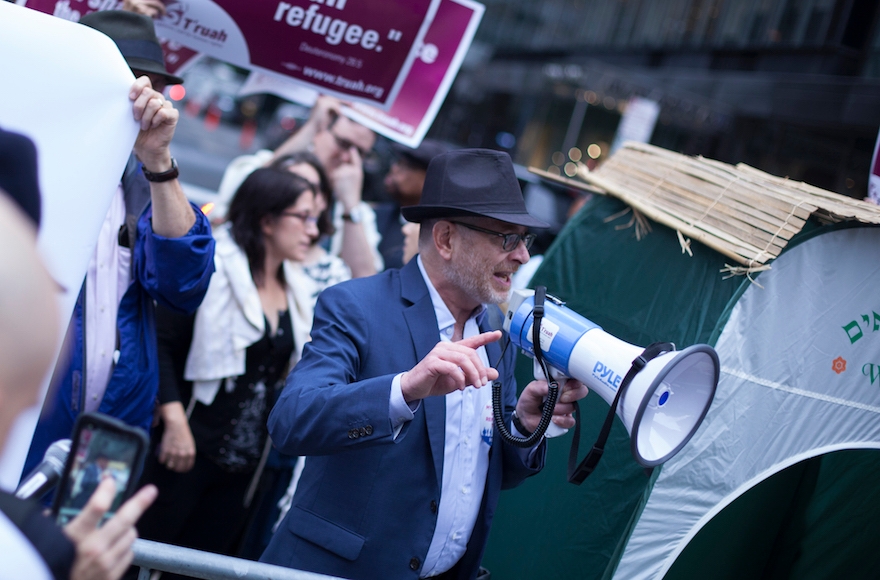 Rabbis marching for immigrants’ rights outside the Trump Tower in New York, Oct. 9, 2017. (Courtesy of T’ruah)

Two dozens rabbis, members of T’ruah: The Rabbinic Call for Human Rights, carried a portable sukkah on Monday, which they erected outside Trump Tower. The gesture was meant as an act of protest against the president’s tough stance on immigrants and refugees. “Sukkot teaches us that what protects us is the community we build, not the walls or barriers we construct,” said Rabbi Jill Jacobs, T’ruah’s executive director. “What makes America strong is the diverse group of people who come here seeking refuge and who build families and communities here.” HIAS, the Jewish immigration advocacy agency, was a co-sponsor.

In San Francisco, a sukkah outside a church is used to spark discussions about identity 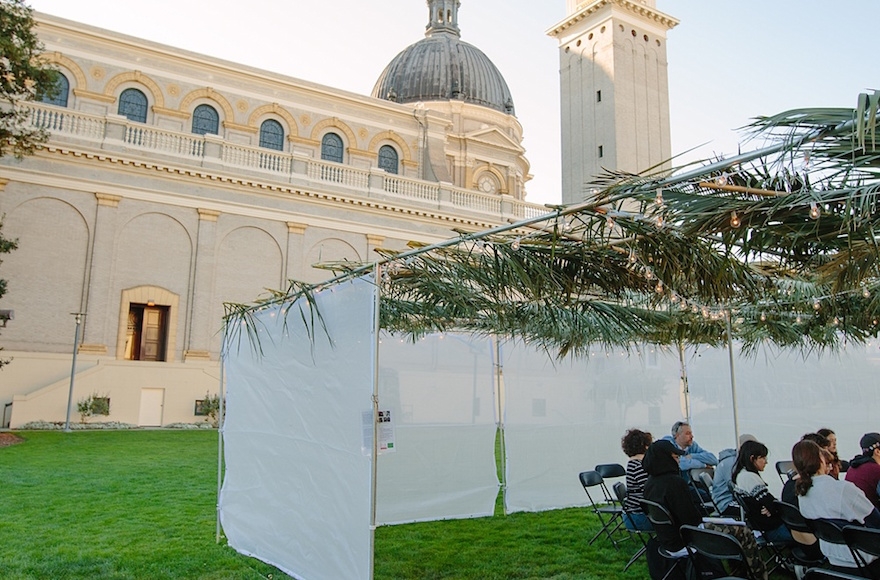 During each night of Sukkot, guests are invited to a sukkah that just happens to be located outside the Catholic St. Ignatius Church near Golden Gate Park to talk about identity, difference, responsibility and faith. The “Open Doors” sukkah, which is organized jointly by University of San Francisco’s Swig Program in Jewish Studies and Social Justice and the Kitchen, a nondenominational Jewish community, is hosting a multi-faith vigil and featuring guest speakers on themes such as racial justice, environmentalism and mass incarceration.

In London, Jews built a sukkah inside a mosque as part of an initiative to help Syrian refugees

It's been a pleasure building a sukkah in @elondonmosque with the mosque's leadership and a Syrian refugee family for @SponsorRefugee pic.twitter.com/aJFZFKgUwo

Jewish, Christian, Muslim and secular groups launched a program to help settle Syrian refugees by building a sukkah inside the East London Mosque in the city’s Whitechapel district. “Sukkot is the festival when Jews live in temporary booths and are reminded of the frailty of their existence,” Rabbi Danny Rich, who heads the country’s Liberal Judaism movement, said at the initiative’s launch on Monday, according to The Docklands & East London Advertiser. “I expect Jews to be particularly sympathetic to those fleeing persecution and disruption with their historical experience.”

In northern Israel, an Israeli-Arab couple hopes to build bridges

Khalil and Reem Bakly, Muslim Arab dentists living in Upper Nazareth, are inviting Jews and Arabs to eat together in their huge homemade sukkah. The sukkah is 100 percent  up to Jewish religious standards: The pair ordered kosher food and got an Orthodox Jew to supervise the construction. “My dream is for this to serve as a springboard for more and more gatherings of this type that will help foster a shared society for Jews and Arabs in this country,” Khalil told Haaretz.

In Tel Aviv, a group is hosting 25,000 people in a sukkah to promote pluralism 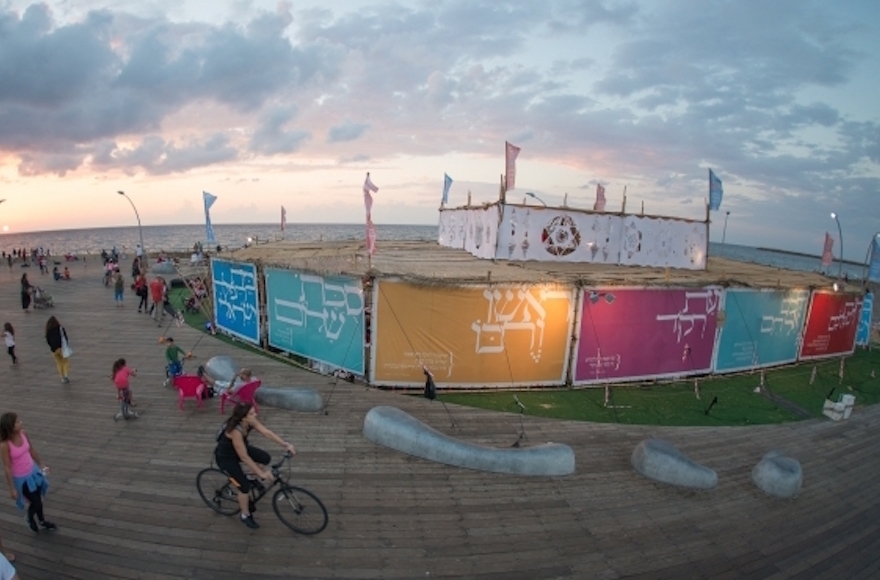 The group Beit Tefilah Israeli — an “experimental and creative Jewish-Israeli congregation” — built a 7,000-square-feet sukkah at the Tel Aviv Port in order to host events for some 25,000 people of different backgrounds. “This is a place where we can meet different sectors of Israeli society in celebration — ultra-Orthodox, Reform, Ethiopian Jews, and also Arabs,” Rabbi Esteban Gottfried, who co-founded the community, told The Times of Israel. The sukkah will feature events that are religious in nature, as well as yoga, lectures and musical performances.