This Jewish soprano takes on Trump in absurdist opera piece 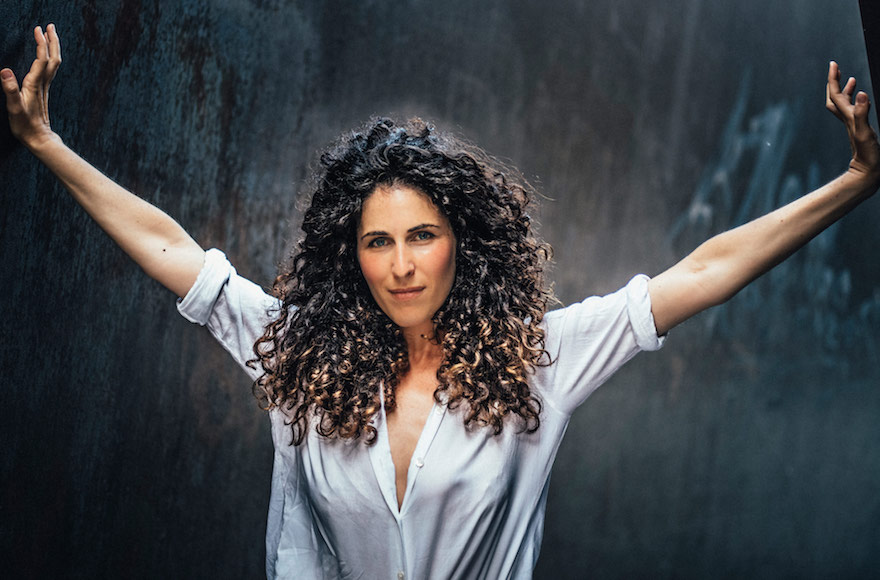 BERLIN (JTA) — “Do it your way, and make it provocative.”

That’s what the producers of the recent Lowlands festival in the Netherlands wanted when they asked American soprano Sara Hershkowitz to perform György Ligeti’s eight-minute absurdist work “Mysteries of the Macabre” with the North Netherlands Symphony Orchestra.

Ligeti’s work — “anti-anti-opera, a comedy about the apocalypse,” Hershkowitz calls it — is a surreal piece that pokes fun at despots and their excesses. Other versions on YouTube show the coloraturas who perform her character, the chief of the secret police, wearing military fatigues, leather and fishnet stockings or a Britney Spears-style schoolgirl outfit.

So what was Hershkowitz to do?

“I would sing naked if there were an artistic justification,” said the Berliner, a Los Angeles native. “I’m not in favor of gratuitous nudity. It’s artistically lazy, and showing flesh no longer has the power to shock. So … I decided to do it as Donald.”

Hershkowitz begins as a clownlike Trump with a paunch, a suit and bright orange makeup. She takes off the suit to reveal a baby costume. The infant Trump, complete with bottle, “has a meltdown,” she says. Beneath the baby outfit is a stars-and-stripes swimsuit with a Miss America sash.

Anti-Trump sentiment is widespread among German liberals and centrists, who worry that the Republican president’s “America First” policies and skepticism about the international order threaten Europe’s security and affluence. Last week a dozen experts here on German-American relations wrote a manifesto urging Germany’s new government to preserve the trans-Atlantic partnership despite its differences with Trump.

And on Saturday, members of Berlin’s Hertha soccer team kneeled before their match at home in solidarity with NFL players who have been kneeling during the playing of “The Star-Spangled Banner” to protest police violence, despite Trump’s objections.

Hershkowitz’s performance at Lowlands — a music and performance arts festival in which the orchestra shared a bill with the likes of The XX and Iggy Pop — brought down the house. Musing over the experience in an email to friends, Hershkowitz said she was amazed to see “15,000 millennials listen rapt, with pure joy and open hearts  to classical music …  the whole lot of them screaming like I was Beyoncé every time I sang above a B natural. Which was totally disorienting, but lovely for my ego.”

Hershkowitz, who prefers not to give her age, explained her inspiration to JTA.

“I want to ignite a conversation about what the relationship should be between classical music and politics,” she said. “There tends to be this belief in my field that classical music is holy, and that our job as musicians is to transcend the schmutz. And I agree that is often our job. But not always.

“Sometimes, particularly with a piece as radical as ‘Le Grand Macabre,’ there is the space to stand up for what we believe in and to connect it to our times,” she added, referencing the Ligeti full-length opera from which “Mysteries” was adapted. “And there is a long, glorious tradition of Jews using satire and theater to do so.”

She describes herself as “very Jewishly identified.” Raised by Conservative Jewish parents who lived in Israel before settling in California in the 1960s, Hershkowitz said she had no trouble picking up and moving to Germany about 10 years ago, going from a thriving Jewish community to one still recovering from the Holocaust.

“I had the name of a voice teacher on a piece of paper, and that was it,” she said of her move. “It was terrifying and also the best decision I ever made.”

“Germany is the center of the opera world,” she said.

Hershkowitz started out doing small gigs, and in 2007 was appointed as principal artist at the Opera Bremen. She has performed at the Hamburger Staatsoper, the New Israeli Opera and the Maggio Musicale Fiorentino, among other venues.

In 2012 she left Bremen, “leapt into nothing and started freelancing.”

“There are days when it’s challenging,” she said, “but I’m still glad I did it. I like being able to choose my projects.”

Striking out on her own seems to be an inherited trait. Her great-grandmother Sarah Greenberg, for whom she was named, “came to America from Belarus with nothing at the age of 14. She spoke no English. She had no contacts.

“I feel like she’s with me a lot – we both left our lives. OK, I was 23 and she was 14. And I came on an airplane and had chicken piccata and cranberry juice for lunch. But I think a lot about how we both left everything we know to create a life out of nothing.”

Today, thanks to Germany’s subsidies for artists and Berlin’s relative affordability, Hershkowitz says she is “able to take risks here. The creative life has dignity here.”

Besides, she says, Berlin with its three opera houses “is a dream city for artists.”

What about for Jews? On the positive side, Hershkowitz says she has “encountered virtually no overt anti-Semitism” in this liberal city of nearly 4 million, whose Jewish population is estimated at about 25,000.

On the downside, there is an occasional “awkwardness in conversations” when non-Jews find out she’s Jewish.

“I am always surprised when people don’t [figure that out] – with my name. Sara is very familiar to Germans,” she said, because Nazi racial laws forced Jewish women to add the name to their passports.

Yet confronting uncomfortable truths is merely a part of Hershkowitz’s job. Take her recent performance at Lowlands.

“I’m not trying to give a message, or pretend I have answers about what to do about the hot steaming mess that is our president,” she said. “But my job is to hold up a mirror. To dazzle, illuminate.”

Hershkowitz will again perform “Mysteries of the Macabre” with the North Netherlands Symphony Orchestra at the Lawei Theater in Groningen on Friday and Saturday.

“The opera world can be a bit insulated; it’s often perceived as being not relevant to the world today,” she said. But if you only “make pretty music … and don’t also stand up for what you believe when great injustice is being done, you would be on the wrong side of history.”