What Palestinian reconciliation means for Israel 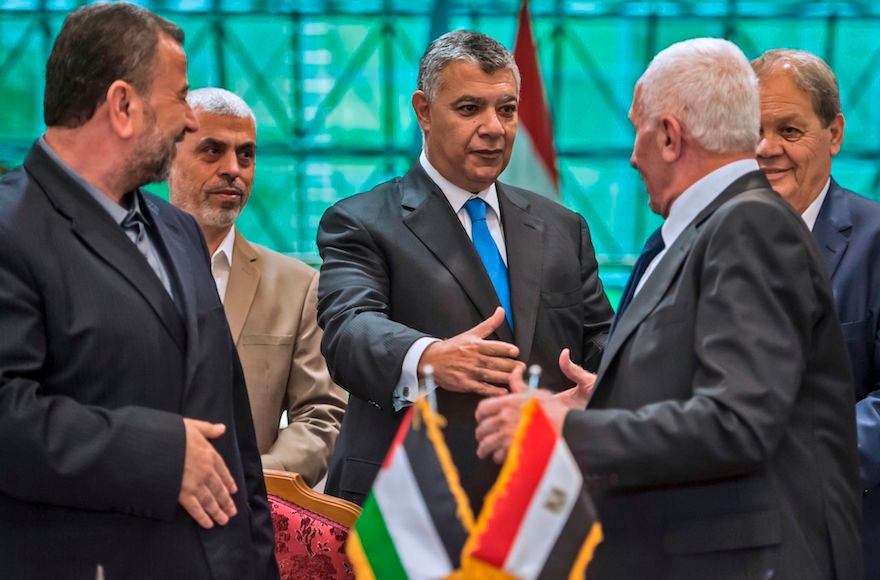 Netanyahu spoke out publicly and loudly against the move toward unity between the feuding Palestinian factions Fatah and Hamas, calling it a threat to Israel and a setback to peace. But he quietly indicated Israel could accept reconciliation if Hamas reformed.

“Israel insists that the PA not allow any base whatsoever for Hamas terrorist actions from PA areas in Judea and Samaria [the West Bank] or from Gaza, if the PA indeed takes responsibility for its territory,” his office said in a statement Thursday after the deal was inked. “Israel will monitor developments on the ground and act according.”

Netanyahu reacted very differently to the failed 2014 reconciliation attempt by Fatah, which governs the West Bank, and Hamas, the terrorist group that runs Gaza. At the time, Israel froze negotiations and severed diplomatic relations with the Palestinian Authority.

Circumstances have since changed.

Israel has persistent fears about the costs of Palestinian reconciliation. But the prime minister’s restrained response, despite calls from right-wing ministers for more aggressive measures, reflects the potential benefits of letting the attempt play out, at least for now.

On Thursday, Fatah and Hamas signed a reconciliation deal in Cairo that reportedly will see the Palestinian Authority take over Gaza’s border crossings and assume full administrative control of the territory in the coming months. Some 3,000 Palestinian security officers are to join the Gaza police force. Elections are to be held for a national unity government.

But Netanyahu has made clear that Israel maintains its longstanding stance against Hamas rejoining the Palestinian Authority, which it broke from when it violently seized control of Gaza in 2007, unless the terrorist group makes historic reforms, including disarming, recognizing the Jewish state and breaking off relations with Iran.

“Reconciliation between Fatah and Hamas makes peace much harder to achieve,” Netanyahu wrote Thursday on his office’s Facebook page after the deal was announced. “Reconciling with mass-murderers is part of the problem, not part of the solution. Say yes to peace and no to joining hands with Hamas.”

Members of Netanyahu’s right-wing government initially urged an even tougher line. But on Tuesday Israel’s high-level security cabinet on Tuesday adopted a position similar to the prime minister’s. While the senior ministers said the government would no longer hold peace talks with the Palestinian Authority, they did not threaten to cut ties or end security cooperation with it.

Israel has plenty of reasons to worry about Hamas joining the Palestinian Authority. The reconciliation deal reportedly does not address Hamas’ military wing, which has repeatedly fired rockets at, terrorized and warred with Israel. After the signing, Hamas’ deputy political leader, Saleh al-Arouri, said the purpose was for all Palestinian forces to “work together against the Zionist enterprise, which seeks to wipe out and trample the rights of our people.”

According to Israeli analysts, Hamas could let the Palestinian Authority handle the administration of Gaza while it focuses on bolstering its terrorist infrastructure and planning new attacks on Israelis. A plan that would have P.A. officials who oversee the coastal strip’s border crossings move back and forth between the West Bank and Gaza raises security concerns.

However, if fully implemented, reconciliation could also bring benefits for Israel. It would address what many observers have warned is a looming humanitarian crisis in Gaza that could push Hamas into another war with Israel. Egypt, which is brokering the talks between Fatah and Hamas, would likely ease its blockade of Gaza, allowing more goods and people to move in and out of the territory. P.A. President Mahmoud Abbas would have to end the sanctions he has imposed on the territory to force Hamas’ capitulation, including crippling electricity cuts.

At the same time, reconciliation just might force Hamas to moderate. According to a report last week in Haaretz, the group agreed not to carry out terror attacks or fire rockets against Israel as part of the deal. Dana El Kurd, a researcher at the Arab Center for Research and Policy Studies, wrote Monday in Foreign Affairs that the international backers of reconciliation seek to “neutralize Hamas’ power by weakening its popular support.”

While El Kurd went on to argue that this would lead to more popular discontent and violence, Israel would likely welcome a defanged Hamas regardless.

Even if Israel would prefer to see Palestinian reconciliation fail on its merits, the government has diplomatic reasons to accommodate the process. Among the world leaders celebrating the deal are two of Israel’s most important strategic partners, Egypt and the United States.

Under Egyptian President Abel Fattah-el Sisi, Jerusalem and Cairo have cooperated closely in recent years on shared regional security concerns, including Hamas. At the U.N. General Assembly last month in New York, Sisi coupled his first-ever meeting with Netanyahu with a call for Palestinian unity as a step toward peace with Israel. By opposing Sisi on reconciliation, Israel could put this progress at risk.

When it comes to the United States, which has also cheered reconciliation, Netanyahu has gone out of his way to ensure no daylight comes between him and President Donald Trump. The prime minister reportedly warned top ministers in February against confronting Trump, explaining that the president’s personality must be taken “into account.”

In many ways, the Trump administration has rewarded Netanyahu by accommodating his desired policies. Washington reportedly has asked Israel to limit settlement expansion, and settler leaders have complained of slower-than-promised building in the West Bank and eastern Jerusalem. But U.S. officials have stayed relatively quiet as Israel has advanced such construction, including, as Netanyahu reportedly promised, outside the settlement blocs Israel expects to keep in any peace deal.

Trump has also taken a position on Iran, Israel’s arch-nemesis, very much along the lines suggested by Netanyahu. On Monday, Trump reiterated his vow to pull the United States out of the Iran deal if Congress did not tighten its restrictions on the Islamic Republic’s nuclear program — earning praise from the prime minister, who last month exhorted world leaders to “nix it or fix it.”

Meanwhile, the U.S. ambassador to the United Nations, Nikki Haley, has vociferously defended Israel in the international body, and on Thursday, the State Department announced the United States would pull out of UNESCO over its anti-Israel bias, prompting Israel to follow.

In return for all this and more from the United States, Netanyahu may feel that abiding Palestinian reconciliation is a small price to pay — especially since he may simply have to wait for the process to collapse. After several days of positive statements by Fatah and Hamas leaders, the issues that have doomed numerous past attempts returned to the fore Monday, most notably Abbas’ sanctions on Gaza and demand for control of Hamas’ estimated 25,000 fighters.

Unpopular at home and under his own diplomatic pressure, Abbas may also be playing a waiting game.