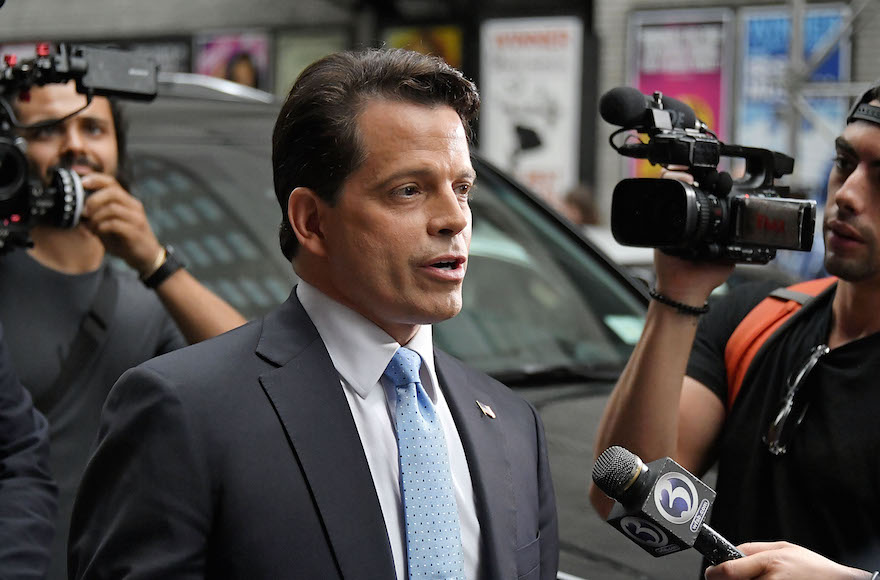 WASHINGTON (JTA) — A Twitter account associated with Anthony Scaramucci, the colorful investor who was briefly President Donald Trump’s communications director, withdrew and apologized for a tweet surveying how many Jews people believed were killed in the Holocaust.

“This poll was put up by @lancelaifer without consulting @Scaramucci who is traveling in London,” the Scaramucci Post account said Tuesday with a screen capture of the offending tweet. “The poll has been taken down.”

The original tweet asked, “How many Jews were killed in the Holocaust?” and offered multiple choices: “Less than one million, between 1-2 million, between 2-3 million, more than 5 million.” The historical figure, 6 million, was not offered.

The screen capture showed that within an hour of posting, 4,776 people had responded, with 68 percent answering more than 5 million, 21 percent saying less than 1 million and the rest split between the other two options.

This poll was put up by @lancelaifer without consulting @Scaramucci who is traveling in London.
The poll has been taken down. pic.twitter.com/SKaaPZAPow

Two tweets followed: “This is @lancelaifer and I apologize if anyone was offended by the Holocaust poll,” one said. Another said, “The intent of the poll was to highlight ignorance of the basic facts of the Holocaust. I take full responsibility for it.”

The original tweet drew widespread outrage. “What the actual f— is this, @Scaramucci?” tweeted CNN anchor Jake Tapper, who is Jewish.

Lance Laifer, according to a Bloomberg Business biography, has founded several capital management firms, as has Scaramucci. It’s not clear how they are associated.

The Scaramucci Post links to articles, many related to the news of the day, and attaches them to surveys or simply asks: “Thoughts?” Three tweets on Tuesday asked followers’ “thoughts” about a Halloween costume meant to look like Anne Frank, the Holocaust diarist. The company distributing the outfit withdrew it earlier this week and apologized.

Scaramucci was communications director at the White House for 10 days this summer and helped spur the firing of establishment Republican figures in the White House such as Reince Priebus, the former chief of staff. He also undermined anti-establishment figures who eventually left, like Stephen Bannon, who is associated with the “alt-right.”

Scaramucci himself was forced out after he delivered an obscenity-laden interview to The New Yorker attacking Priebus and Bannon.