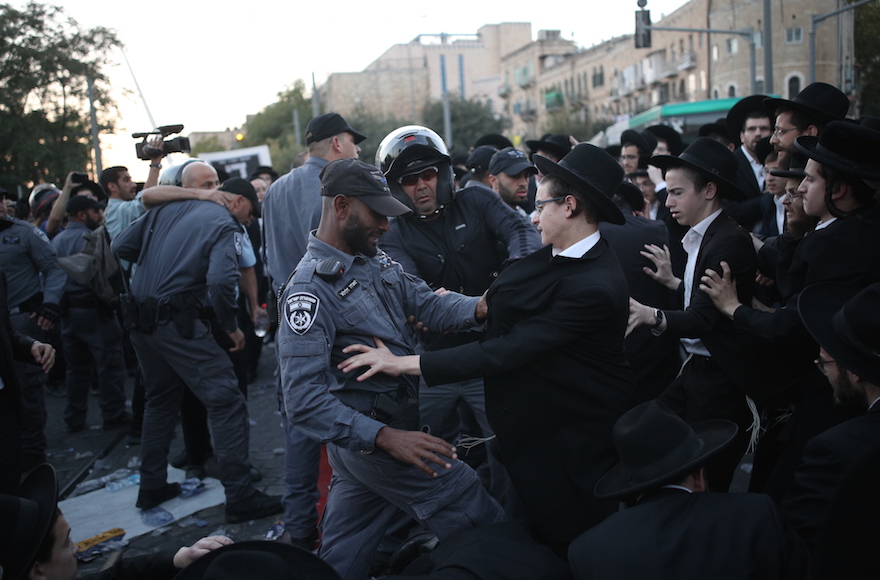 Thursday’s declaration follows three days of demonstrations in which hundreds of haredi demonstrators blocked central roads in Jerusalem and Bnei Brak, a haredi enclave. Dozens of protesters have been arrested in recent days amid charges of disproportionate force by police.

The arrested yeshiva students were each sentenced to 20 days in military prison for not appearing after receiving several draft notifications.

Demonstrations on Thursday began at the busy Shilat Junction near Modiin Ilit, which is home to a large haredi population. Other protests were due to take place in Jerusalem, Bnei Brak, Beit Shemesh, El Ad, Ashdod in southern Israel and Safed in northern Israel.

Protesters shouted “Death before conscription” and “prison before army service.”

“We’re demonstrating for just one thing: The State of Israel wants to desecrate us and for us to no longer be haredi,” Moshe Cohen, a yeshiva student from Hadera, told Ynet. “We’ll fight with every fiber of our being; we’d accept death before transgression on this. We’ll fight to our last drop of blood. We will not give up. We’ll die before joining the army.”