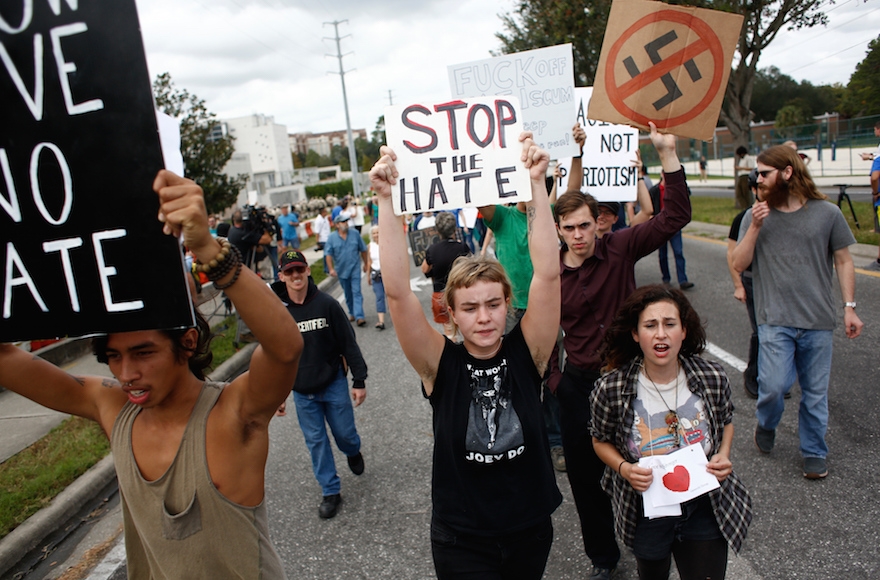 (JTA) — Protesters heckled white supremacist leader Richard Spencer as he spoke at the University of Florida.

Booing and chants of “Black Lives Matter” and “F*** you Spencer” greeted the “alt-right” leader as he took the stage Thursday at the Phillips Center for the Performing Arts on the Gainesville campus, The Miami Herald reported. The chants, though disruptive, did not stop Spencer from delivering his address.

Hundreds of protesters gathered outside the venue to heckle Spencer’s supporters, according to The Orlando Weekly, and someone punched a man wearing a shirt with swastikas.

Spencer’s speech at the university, which is home to the largest Jewish student population in the country, had gained wide media coverage as Gov. Rick Scott declared a state of emergency in the county ahead of the event.

Some had feared the event would erupt into violence, as what happened in August when Spencer led a group of neo-Nazis and white supremacists at a rally in Charlottesville, Virginia, that turned deadly.

The university allowed Spencer to speak after initially declining his request, saying that as a public institution it must uphold the principles of free speech. Spencer, the founder of a white supremacist think tank, has advocated a white ethno-state that would exclude non-whites and Jews.

The university was forced to pay over $500,000 in security for the event. In 1992, the Supreme Court ruled that the government cannot charge a speaker for security costs due to potential protesters.

On Monday, Chabad director Rabbi Berl Goldman told JTA that dozens of Jewish students, parents and staff members had contacted him with worries regarding the event.

Some 9,400 Jewish students attend the university, which has an enrollment of 52,000.