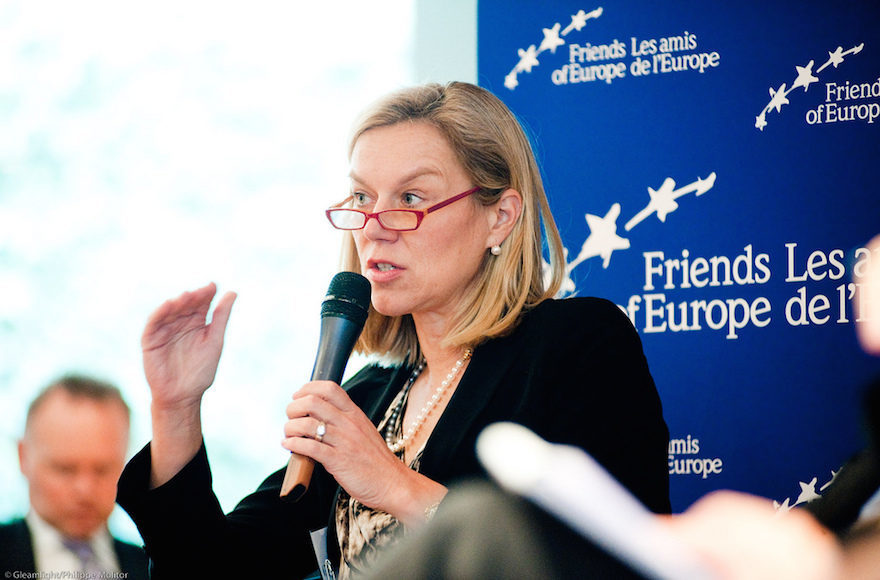 AMSTERDAM (JTA) — A Dutch activist for Palestinian rights who is married to a senior member of the PLO was nominated to the second-most powerful Cabinet post in the Dutch Foreign Ministry.

Sigrid Kaag’s nomination as minister for international aid will be formalized in the coming days following the signing of a coalition deal between the ruling People’s Party for Freedom and Democracy and three other partners, including her left-wing D66 party, the NOS public broadcaster reported Friday.

The wife of Anis al-Qaq, a deputy minister under Yasser Arafat in the 1990s and a Palestinian Authority ambassador to Switzerland, Kaag has worked for UNRWA, the United Nations agency that aids Palestinians.

As minister for aid, Kaag will not be directly responsible for the foreign relations of her country, which is one of Israel’s strongest allies within the European Union. But she will be responsible for implementing aid projects in the West Bank — including ones considered illegal by Israel and that have led to friction between the Jewish state and the Netherlands.

In an interview from 1996, Kaag said that Benjamin Netanyahu, who was that year elected prime minister for the first time, does not represent peace-seeking Israelis.

“They are absolutely not represented by Netanyahu,” Kaag said of that group of Israelis.

After the interviewer reminded her that Netanyahu was democratically elected, she said, “Yeah, well, by a very small margin and only because of special elections rules.” Netanyahu won the 1996 vote by 1 percent over Shimon Peres.

Kaag in the interview called settler “illegal colonists on confiscated land.” She also said that settler called her “whore of the Arabs.” She also said in that interview that her father-in-law was in 1995 stabbed on the Jerusalem promenade by a Jew wearing an Arab kaffiyeh – a claim that was later contested by critics who said Israeli police records show no record of such an incident that year.

“Netanyahu’s way is of soundbites with racist, demagogic overtones about the Palestinian peace partner, his Arab peace partners, who are being sidelined,” added Kaag.

The Netherlands’ next foreign minister will be the ruling party’s Halbe Zijlstra, whom pro-Palestinian activists in the Netherlands described as “very pro-Israel.”

In 2015, Zijlstra wrote an op-ed for the NRC Handelsblad daily in which he criticized the U.S.-led international nuclear deal with Iran as “a historical error,” a view that echoed Israel’s.

The deal, in which Iran got relief from international sanctions in exchange for agreeing to scale back its nuclear program for 10 years, “strengthens the anti-Western regime in Tehran, creates instability in the Middle East and gives Iran the slack necessary to develop a nuclear bomb,” Zijlstra wrote.

The European Union, where the Netherlands is a founding member, supports the deal, which President Donald Trump said last week that he would not certify.